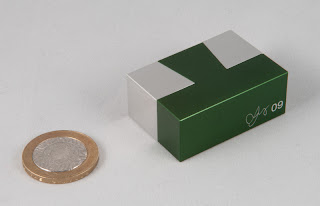 If I didn’t know better, I’d think that Wil Strijbos had a thing for dovetail joints – not content with bringing the puzzling community a pair of concave and convex impossible dovetails, Wil recently added not only a third one to that set, but also an entire new set of Impossible Dovetail Cubes in some really funky colours.
Dovetail the third, adds a new twist to the Convex / Concave Dovetail set, although the family resemblance is still clear through the common colouring of a green piece and an uncoloured aluminium piece. From some elevations this dovetail looks quite pedestrian, however when viewed from the top, the brain gets a little frazzled. More so if you happen to see the edges and the top together.


As usual there’s a locking-mechanism in there to be defeated before the two pieces can be parted – and in case you’re wondering, yes, each piece is a single colour!

Wil’s standard challenge with his dovetails is for the puzzler to work out from an inspection of the outside, what the shapes of the pieces must be in order for this to work – and this one presents a rather neat little mental challenge … in fact if I hadn’t seen one made in wood a little while ago and seen some notes on making them in E.M. Wyatt’s classic book on crafting wooden puzzles, I’d have been scratching my head for quite a while longer!
The Dovetail Cubes are a reasonably recent addition to the family and come in rather colourful varieties. Externally, the cubes all look mechanically the same – all impossible, but all the same. They each appear to have a set of crossed dovetails with a dovetail joint between the top and bottom halves on each face. Wil’s challenge to puzzlers is to work out how they might work mechanically, while telling you that all three are quite different. 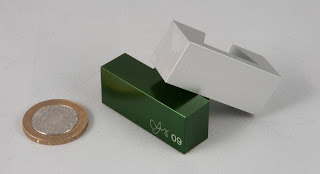 The cubes employ a locking mechanism as usual and each have their own little surprise when you open them up … they are all totally different and if you haven’t already played with this sort of puzzle before, you’ll probably find at least two of them are a little unexpected. Once you see the mechanism, they make total sense and it’s hard to get them out of your mind (a bit like learning the secret behind a magic trick – the trick and the accompanying wonder are banished forever) – but what lasts for ages is the quality of the machining and the fit between the pieces – the tolerances are really exceptionally tight leaving no slop in the fit at all.
When Wil was visiting a short while back, he had a couple of prototypes for us to fiddle around with and he was explaining that one of them required some custom-made tooling to machine – and you can see why – but the results are terrific. 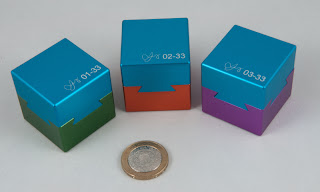 One little finer point I really liked was the attention to detail on the locking mechanism, where an extra piece or two has been added to trap the mechanism and prevent it from falling out when the pieces are separated … nice!
If you like Wil’s (not-so-)heavy metals, then you really ought to add a set of these to your collection – fun to fiddle with and a nice little challenge for non-puzzlers to think about.
Posted by allard at 13:44