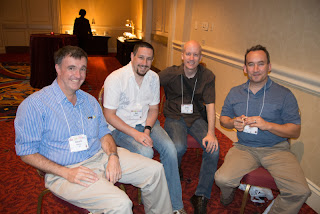 During the first of the three evening functions, Jerry and the committee formally welcomed us all to the 32nd Annual International Puzzle Party. During the speeches all of the first-timers were asked to raise their hands and it was a bit surprising when Wil Strijbos raised his hand next to us – just so that we didn’t feel singled out! Fat chance of that happening as there were piles of first-timers spread around the ballroom.

At that point there were yells of “Greenhorn, Greenhorn!” from somewhere behind us and Chinny arrived dishing out green Chinese finger traps to everyone with their hands up within striking distance ... and when he got to Wil he made a point of changing the chant to “NOT Greenhorn” and presented him with a purple finger trap.

We hung out with the Boschs and Neil and Jen for a while as various people came over to introduce themselves, chat for a bit and welcome us to our first IPP ... James was right!

Peter slipped into entertainer mode when he realised that Michelle hadn't seen his magical mini-bar key and he soon had her thoroughly flummoxed and highly entertained - much to everyone's amusement! 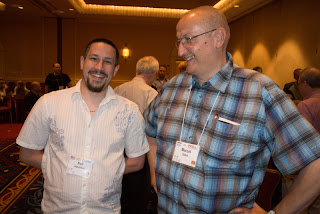 I found myself chatting to Marcel Gillen about whether or not we’d be seeing him at the Dutch Cube Day again this year (“Of Course!”) and ended up talking about how one might be able to get hold of one of his original chess pieces – at which point he remarked that he happened to know someone in the room (remember that this is about 400 of the world’s best designers, manufacturers and collectors of mechanical puzzles – and me – so this probably isn’t quite as strange as it might first appear!) had a spare copy of one of them, at which point he marched me over and introduced me to a collector who’d recently acquired one of them only to find that he already had one, so Marcel suggested that the two of us should talk ... (we did, and hopefully at some future point some cash and a puzzle will change hands – at which point it will no doubt feature in this blog). 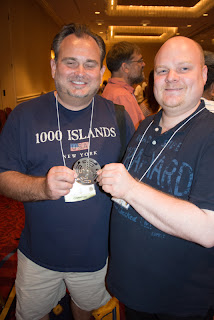 Goetz Schwandtner came over with Rob Stegmann in tow – knowing that Goetz was a bit of a Kugellager-junkie, Rob had brought an old version of the puzzle in a round format with four tracks along for Goetz to play with, and knowing I was also interested, Goetz had brought it over to show me as well. The two sheet metal parts (the crown and the spider) are rotated while the rivet shaped pins are allowed to move in and out along the tracks – very Kugellager-ish and significantly older! Goetz gave it to me with 1 pin out and the other 3 in at the start and said it had taken him quite a while to get it there and then encouraged me to have a go ... which I duly did, but I couldn’t tell you whether I was going forwards or backwards and I fear I gave it back to him in a far more jumbled state. Later that evening I ran into the two of them in the design competition room where Goetz managed to finish the puzzle and I got some neat pics of the puzzle fully disassembled.

A short while later Goetz grabbed me and said that Jerry McFarland wanted to meet me and took me across the room and introduced me to Jerry – I’d been planning to seek Jerry out at some point as I’d left the UK with strict instructions from Bruce to pass on his best regards – so I did just that.
It was lovely to meet Jerry face-to-face after all the emails we've traded over the past year or two on a couple of his recent projects, including one that turned into his design competition entry this year. Jerry had an iPad with him and showed us a really impressive video of his home-brewed CNC rig for cutting burr pieces – it’s pretty amazing to watch it in action and Jerry admitted that he got almost as much pleasure from putting the rig together than he does from using it to make new puzzles. 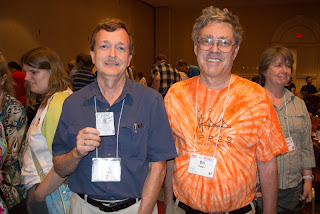 Next thing Jerry called Bill Cutler over to introduce me to him and I ended up chatting with Bill about his designs and how I’d been at James’ place when he decided he needed to take out all of his Cutlers to make sure they were all properly identified and catalogued ... and it made a pretty big pile of burrs!

I realised I’d left Gill alone for quite a while so wandered back in her direction (turned out she was in fact quite happily chatting to Jen & Michelle and hadn't actually noticed how long I'd been gone!). We ended up chatting with Simon Bexfield for a while before the entire Dalgety-clan came over to make sure that we were having fun.

A bit later Brian Young strode purposefully over and presented me with a bunch of little puzzles, including an Aussie version of the historic leprechaun puzzle, a Puzzleman Australia bead puzzle and a set of what looks a bit like Stewart Coffin’s Logs and Sticks, except there are too few logs and too few sticks - so it's probably something else entirely!

When things began winding down a bit Wil invited me up to his room to show me a couple of puzzles and asked me to show him my solution to his First Box – he demonstrated his solution and after a bit of a hitch I showed him how I was solving mine. We decided that they were both equally effective on the current version of the box, although I’d already found that my approach wasn’t all that successful on James’ copy of the original First Box – advantage Strijbos! While we were chatting about the First Boxes, Wil gave me a new cylinder for my First Box with a smiley face on one end and a sad face on the other ... so you start out with the sad face peeking out through the hole in the bottom of the box and have to release the smiley face – cute! He also gave me replacements for all the other MPP crowd that I’d be seeing in a couple of weeks time as well... 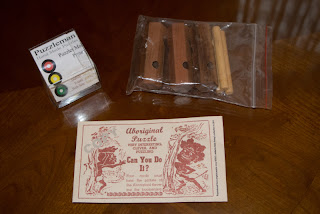 Wil had brought a copy of Flemin’ across for me to have a look at along with a 2-Drawer Karakuri box (Yes, I took them both) – didn’t get Flemin’ open, but opening the 2-Drawer box put a huge smile on my face – that one has a huge dose of humour in it!

While I was in Wil’s room I noticed a familiar-looking ribbed blue cylinder that looked remarkably like AlCyl on the table and asked about it – Wil pointed down to one of his trademark plastic crates that was literally half-full of them ... life’s weird, I’d seen pics of them years ago and spotted one listed on Eureka but it was sold before I got anywhere near it, and literally haven’t seen one since then, until my mate Chris managed to buy one privately quite recently and I was allowed to have a go on it – loved it and decided I ought to try and find one for myself... and here’s Wil with a crate of them! So I got one for myself and another for Nigel since he’d asked me to keep an eye out for anything that I thought he might like.

Somewhere past midnight I crawled back into bed again... at sometime the jet lag is going to get me!
Posted by allard at 18:34