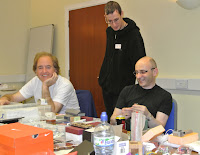 It feels like ages ago that I first read about these mythical gatherings of the-great-and-the-good in puzzledom. Gatherings where the great puzzle designers and collectors got to chat about life, the universe and why puzzling makes both of them better. Fantastic design competitions only open to new puzzles where the best puzzle craftsmen would show off their skills in an attempt to bamboozle all comers. Talks by people whose names are instantly recognised by anyone who’s vaguely interested in puzzles … gala dinners, tours and entertainment and puzzle-trading and selling, the likes of which you have never experienced before - all of this in interesting cities all around the world – sounds dreadful, doesn’t it!

When a few of us realised on one of the puzzle forums that we lived reasonably close to one another, we started getting together every now and then to chat about puzzles and share new acquisitions. The topic of IPP invariably came up and they sounded pretty special – thinking that they were all well beyond anything that we might aspire to, we decided to do the next best thing and hold a mini puzzle party of your own in the Midlands – and the MPP was born.

Ten or fifteen of us got together every few months to show the others what we’d managed to find in the interim and have a bash at everyone else’s puzzles. There would be chat about the latest finds on the inter-web and every now and then folks would ask about the IPP – and usually the closest we’d come to it was someone had met someone (probably at one of the Camden do’s!) who’d been to IPP … and then toward the end of last year, something strange started happening – a couple of our merry mob went along to the Dutch Cube Day and met some of the leading lights in puzzledom – and they were just like us – they also wanted to chat about puzzles and enjoyed fiddling with others’ designs and talking about what made a good puzzle. 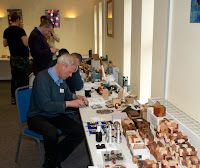 Some of our number began going along to the monthly puzzle do’s at Camden Lock and started broadening their circle of puzzle mates – and that bunch included heaps of IPP-regulars. And then James Dalgety invited the bunch of us down to Devon for a day’s puzzling and we got to meet a bunch of new puzzlers (several of whom live reasonably close to us in the Midlands), several of whose names we recognised from that puzzle design competition and from reading about the IPP. I went along to Peter Hajek’s EPP and met another bunch of reasonably local puzzlers who’d been designing puzzles for ages … so we did the obvious thing, and invited them along to our next MPP, and they came along and even seemed to enjoy themselves.

What was weird, was noticing that over the course of the year, our ring of puzzle pals seemed to expand exponentially to include a whole whack of IPP-regulars – and we went from just reading about IPP to knowing folks who’d actually been involved for years and years.

Somewhere during all of that, I’d started talking about IPP to a couple of folks and got a steer on how to express an interest in the right direction, and then with a bit of help from some of those puzzle friends, managed to get invited to the next IPP later this year.
So here I am – having looked up at the IPP as the annual puzzling pinnacle, knowing that I’ve been invited along to the next one, and feeling more than a little daunted at the prospect!

Oddly, it seems I’m not alone … and in fact it also seems that the organisers understand that and try and make newbies like me feel welcome! When I’d hinted to James Dalgety that I might be a bit nervous of what might happen, he did the kindly-uncle-thing and told me not to worry, all first-timers get a special indicator on their name tags (everyone wears name tags all the time!) and everyone else is instructed (his words! :-)) to be nice to the new folks.

Wherever I saw anyone else expressing a bit of trepidation about their first IPP on a puzzle forum, invariably they’d be swamped with reassuring messages from the old hands.
In the past I’ve commented on the fact that I’ve never come across a real puzzler who wasn’t a really nice person – be that at our own little puzzle parties, on puzzle forums on the inter-web, anywhere in fact. I suspect that my theory isn’t going to be called into doubt this time around either.
Posted by allard at 13:04