A little while ago Matt Dawson got in touch with me and asked if I’d be interested in acquiring a copy of his IPP32 exchange puzzle, and whether any of my puzzling mates over this side of the pond might like one as well to make the shipping worthwhile. The email included a picture of a wood and brass puzzle very loosely resembling an oil well with what looked like a drawer on the front of the base. Matt described it as a sequential discovery puzzle and sounded quite excited about it ... so I fired an email around to the usual suspects and pretty soon I’d let Matt know that I had lined up nine takers, including myself – and a little while later a decent-sized box arrived with nine little wooden oil wells neatly arranged inside it.

Needless to say the other eight were pretty chuffed to get a copy and we all set about playing with our new toys spread around the countryside. 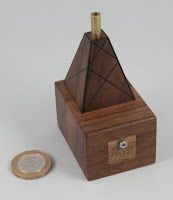 The puzzle comes with an accompanying story that explains that some time ago when the oil price tanked, this well was capped off and you’ve now inherited this well from your uncle, and with oil prices where they are at the minute, it’s probably worth your while uncapping this well and extracting the oil within ... so your task is to find the oil barrel hidden within the oil well. Neat!

The oil wells have been made by Mr Puzzle in Walnut wood with the odd bit of metal to make things a bit harder. The little drawer in the base appears to have a hex bolt screwed into it and there’s a piece of brass tubing sticking out of the top of the well head. Oh, and nothing moves!

So it’s probably worth shaking it a bit – and that lets you know that there's something inside it – probably a good sign ... if you’re an average puzzler, you’re probably going to try blowing in the brass tube – and sometimes that’s a really good idea ... but not this time.

Spin it. Spin it another way.

Knock it. Knock it the other way. 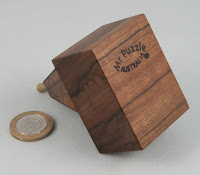 [Don’t submerge it, especially not in OIL! – ever since that episode with a reader and his Wasserhahn I now feel the need to tell people that ... weirdoes!]

You’ll probably need to spend a little time getting to know your oil well, and you’ll probably discover one or two little things that you can do to it, and these end up being a little more useful than my other suggestions. For one thing there’s a useful tool, if you recognise it! It might just release another tool, and then you can play with your new found tools for ages trying to work out what you can do, and which of those many things might just be the one or two little nuggets that could be useful...

After a fair amount of jiggery pokery I managed to get some things moving in a promising fashion and after a bit of trial and error, the drawer would open and present a cute little oil barrel – Mission Accomplished! 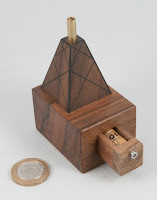 It’s a really compact little puzzle that gives you a series of little challenges to solve as you progress – there is absolutely no chance of fluking this one open, and the mechanism that Brian has hidden inside there is jolly clever indeed ... for a relatively small puzzle there’s quite of lot of gubbins packed in there...

One word of caution: once you solve it, please pay attention to how it should go back together again ...if you don’t, you may well end up with a paperweight or an insanely difficult puzzle that will require several external tools!

Great exchange puzzle Matt, and thanks for offering some to a bunch of puzzlers across the pond – they all went down very well!

If you're interested in picking up a copy, Brian has some for sale over at Mr Puzzle.
Posted by allard at 17:03