After breakfasting on bagels again, we took the Arcela Express to New York, enjoying the smooth ride and catching up on some puzzling along the way. In NYC we checked into The Benjamin, grabbed a bite to eat before heading to Tiffany’s in a vain attempt at redressing the spending imbalance introduced over the course of IPP, although we only shopped on the poor-people’s-floor!

That evening I toddled off to the Puzzle Party at Gossip Bar NYC, leaving Gill to some QT on her own in the hotel. It turned out I was the first to arrive, so I set myself up at the bar with a cold drink and caught my breath after the brisk walk cross-town. A short while later Viktor Genel arrived and we started chatting about puzzles and he hauled out some of his designs that had been beautifully made by Wayne Daniel. The Deschamps’ arrived and the rest of the NYC tour group arrived pretty much en-masse just after that, pretty much filling the place in a couple of minutes. Just after the arrival of the main bunch, I spotted someone who looked just like Jane Kostick and when I caught her eye and pointed at my name on my snazzy MPP polo shirt her face lit up in recognition and she came straight over. 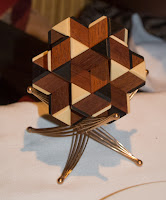 A little quirk of fate resulted in us sitting at a quieter table at one end of the room, where a few others who arrived a bit later found themselves as well. I ended up having a wonderful long chat with Jane about IPP (I may have been a bit gushing!), the designs she’d entered in the competition, their development and our families. It was so nice to chat with someone who was so obviously passionate about her craft and knew her way around her designs and their geometry backwards. Quite often she’d be chatting about something else entirely while almost absent-mindedly assembling a structure almost without paying it any attention at all. Not content with assembling them one way, she’d often take them apart and produce alternative assemblies using the same pieces. 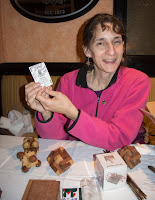 At one point in the evening she realised she’d forgotten something and changed her earrings to a special pair that her husband John had made for her ages ago – measuring only about 10mm across, the earrings each had a set of five interlinked tetrahedra hand-crafted in gold – and only afterwards did I kick myself for not getting a better picture of her with them in place.

Jane marks herself out as a pretty awesome craftsman through her work as well as her amazing knowledge about the geometries she uses. She enjoyed telling us about some trees she’d discovered recently that grow with square and triangular growth rings on them, and then fished around in a bag of bits and came out with the pair in the pic below, one with a clear triangular set of rings and the other with a rather clear square pattern. We pretty much all called her bluff and she happily showed everyone how she’d cut the wood to achieve the patterns, adding that once you’d done the sums and realised that you needed to simply cut at thirty five and a quarter degrees to the grain, you’d be fine .... thirty five, and a quarter degrees! 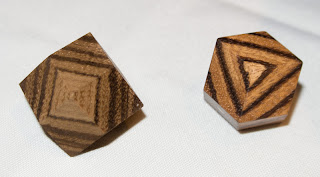 During the course of the evening I’d returned her puzzles from the Design Competition to her and asked about buying one of them and was thoroughly delighted when she sold the best one of the lot to me – the 3 Layer Tetraxis Array from the competition – and a bit taken aback when she insisted that I take the bronze Emperor Star that had acted as its stand as well, “because John thought they really went beautifully together and it would be a shame to split them up”.  WOW.  I was totally bowled over when she proceeded to open the unopened spare set of puzzles from the competition and take out the Chamfered Cube from that set and give it to me as a gift, because she thought that one had the best combination of woods and was a bit disappointed that no-one had gotten to see it at the competition... 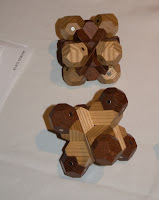 At one stage we had a wall of folks clamouring around the table playing with various bits and pieces that Jane had brought along and it was a wee bit overwhelming, but everyone wanted to play with her pieces – Jane’s work really seems to have that effect on folks.

It really was a treat getting to spend so much time with Jane chatting about her work, her craft and life in general, and meeting her friend Muli who was clearly so proud of what her college friend is doing.

Chris Morgan came over toward the end of the evening having taken his IPP Host Puzzle on a tour of the party, and told Jane all about it and then proceeded to give us a demonstration of the opening – it really was an incredibly beautiful object and the mechanism is staggering: a cut-down version of the centre-piece on Kagen Schaefer’s monumental puzzle desk, the puzzler needs to play the notes in the correct order on the organ pipes in order to release the lock – a false note and it automatically resets itself. 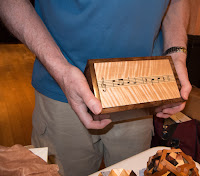 We all hung around chatting until Brett had to almost physically shoo us out of the restaurant about an hour after our NYC Puzzle Party was supposed to have ended.  Thanks Brett, it was a great evening from where I was sitting! And congratulations on not losing any of the ducklings! :-)