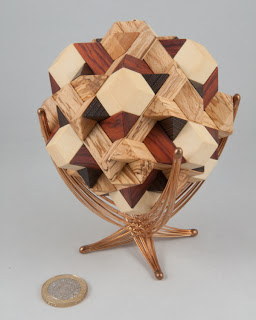 OK, so I got back from IPP32 in Washington DC a couple of weeks ago and so far I’ve only blogged about the events and the people and mentioned the odd puzzle here and there, but I haven’t really talked about any of them in much detail... time to change that!

I’ve made absolutely no secret about the fact that I’m a huge fan of Jane Kostick’s gorgeous wooden geometric assemblies, and I was really happy to see a couple of new Kostick designs in this year’s Nob Yoshigahara Puzzle Design Competition. One of them had made a sneaky appearance on Jane’s new website a couple of months earlier so I’d been keeping an eye out for it and when Nick Baxter published this year’s entries of the competition, there it was – the 3-Layer Tetraxis Array. 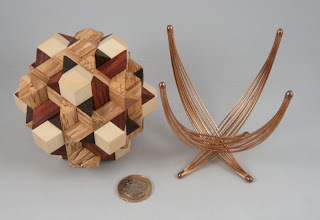 The picture on Jane’s website was pretty spectacular and the combination of the woods and the geometry gave it an almost two-dimensional look – take a look at the top right hand picture. That caught my attention, then when Nick’s picture went up, it had a totally different combination of woods and it looked pretty incredible. The one entered in the competition had Holly blocks at the corners, an internal frame of Wenge, an outer frame of Spalted Apple and a layer of Burmese Rosewood in between those two. It was displayed in one of John’s silicon bronze Tetraxis Star Cradles – itself a lovely little feat of engineering – the Cradle shares the same construction weave as the other bronze stars, but its arms are bowed giving it the silhouette of a wine goblet, or a champagne flute, depending on how wide you spread the arms ... very clever – and makes a fantastic stand for Jane’s woodwork!

I’d had a bit of a fiddle around with the puzzle during the design competition, decided I really liked it and that I’d need to try and get my grubby paws on a copy at some point,  and then tried to avoid it for the rest of the time so that I could enjoy discovering it again ... hopefully...
...and by now, if you’ve read my bit about the N.Y.C. Puzzle Dinner, you’ll know that Jane sold me the competition entry for a jolly good price after she’d convinced herself that it was still in good enough shape after being man-handled by a bunch of puzzlers for five days – I’d already told her it still looked perfect but she wanted to check first... it still looks in perfect condition now as it sits on my desk, having been played with at the dinner in N.Y.C., making it back to the UK and then having several visiting puzzlers have a bash at it and being played with all day at our last MPP – Jane’s work keeps its finish beautifully and takes a lot of playing, with plenty of grace. 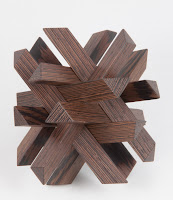 Right, so now that I’ve got it home I’ve managed to have a decent play around with it... what’s it all about?

As the name says, it’s made up of three layers of sticks kept in place by magnets. Each layer can be constructed on its own, or in combination with any of the other two – each combination giving you a pretty unique looking piece. 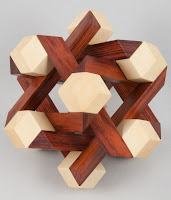 The innermost layer provides a skeleton for the rest of the construction (although each of the other layers is self-supporting in its own right) and is made up to long triangular Wenge sticks that each affix themselves magnetically to an internal rhombic dodecahedron. Once you’ve done that you have a spikey central core that you can wrap the next layer around rather easily. The second layer uses the mid-length Burmese Rosewood sticks to lock onto the Holly blocks at each vertex – the geometry of this layer is particularly cute and it can be seen pretty clearly in the pic on the left. It sort of looks like it should want to collapse in on itself, but the magnets and the geometry do a pretty good job of making it quite stable. The final layer is the Spalted Apple that wraps around the outside. These sticks can be joined in either groups of three or four thanks to the layout of their magnets – and the overall lattice has alternating joints of three and four sticks down any path that you might care to trace. 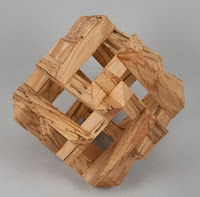 I enjoyed playing around with the construction – the middle layer can be a bit disorientating to build on its own – and the simplest way to build it is probably to build the first two layers and then remove the first one from the exoskeleton. Something that also intrigued me was the discovery that if you move the Spalted Apple sticks aside a bit at any of the four-piece-joints, you uncover a perfectly rhombic dodecahedron-shaped hole that will fit one of the Holly blocks perfectly – not sure why that sort of thing still surprises me – it probably shouldn’t by now! Anyhow ... I got to playing around a little and started playing "hide the Holly blocks", and got about half – way round before the structure started letting go – remember that the Holly blocks are holding the middle layer together, so when you remove the blocks, that layer starts sliding apart as there’s nothing holding it together. You can get a pretty good feel for what it would look like – and it totally changes the look of the thing. When Jane and I were chatting about her puzzles in NYC, she mentioned that she was playing around with adding some extra magnets, and if I remember correctly, that might just enable you to place all the blocks inside the structure as I described... and keep it stable. 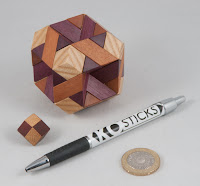 I was incredibly chuffed when Jane insisted that I take the Tetraxis Star Cradle as a gift because John thought they went to well together – they really do go well together ... but I was seriously embarrassed when she went rooting through the unopened box of spare puzzles submitted to the Design Competition and fished out the Chamfered Cube from that set and handed it over as another present - seriously gobsmacked! 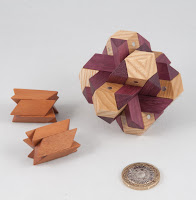 The Chamfered Cube is another multi-layered Kostick creation that starts with a tiny Chamfered Cube (...there was a clue in the name!) in the centre of four sets of three triangular sticks, with each set held together magnetically with a rhombic dodecahedron at each end. [There’s probably a picture below if you can’t wrap your mind around that – and if you can, move along, I can’t teach you anything!] The triangular Purpleheart sticks each lie flat against one of the chamfers, at an angle, leaving a tiny square pyramid of empty space against each face of the little cube. The four sets effectively form a pair of interlocking “X”s about this little Chamfered Cube in the centre, and then twelve shorter Tigerwood sticks connect each of the adjacent RD blocks, completing the structure ... which then looks like a Chamfered Cube ... in fact it looks just like the mini Chamfered Cube EXCEPT that the empty space outside the mini cube has been reversed into negative space on the square sides of the larger Chamfered Cube – neat little bit of symmetry there... :-) 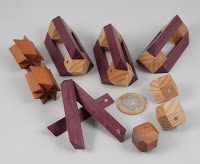 Fiddling around with this puzzle also shows that you can build the exoskeleton using just the Tigerwood sticks and the corner blocks, giving you quite a funky looking zig-zag cube with a lot of space in the middle... and by the way, if you hadn’t already spotted it – take a look at the triangular grain patterns on the external corners of all of the Ash blocks on the corners of the cube ... that didn’t happen by accident.

If you’re interested in acquiring any of Jane’s pieces, please drop her an email via her web-site – each piece is pretty much made up to order so once you’ve settled on a design you can choose exactly the woods you’d like and she’ll make it up to your specifications ... oh, and she’s a wonderful person to deal with!
___________________

Neil’s written up an excellent post on all things Kostick from this year’s Design Competition (and then some!) over here – READ IT if you haven’t already...

By the way ... that little multi-coloured block just above the pen is made up of offcuts from the triangular stock during the manufacturing process - they 'just happen' to go together perfectly to make a rhombic dodecahedron. Neat!!