Dave Rossetti’s Exchange Puzzle at IPP32 was designed by Stewart Coffin (design # 255 if you’re counting!) and beautifully made by Tom Lensch. This was one of the puzzles I’d spotted during the exchange that I needed to track down on the Saturday ... and luckily Tom had a few spares for sale. 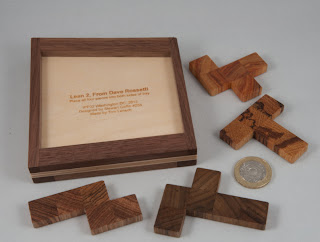 It’s a one of those beguilingly simple-looking puzzles –four different pentominoes to fit in a tray that looks well over-sized for the four little pieces ... this one comes with a small twist in that the name not only refers to the shape of the tray (which looks like the cross-section of a simple lean-to structure) but it is double-sided and the opposite sides are narrow and fat respectively and they’re swapped around the reverse side ... giving you two trays to solve ... and before you ask, no, the same solutions won’t work on both sides!

Allegedly there’s an easier side and a harder side, and maybe it’s because I’m generally rubbish at packing puzzles, but I really didn’t find either one of them particularly simpler than the other. The shape is confusing with a pair of right angles along the base and mismatched angles across the top. (I know, I know, they’re perfectly matched to one another, they’re just not right angles – and my brain works in right angles ... when it works...)

I followed my usual approach for these sorts of puzzles (hard ones!) of leaving it on the desk in the study and having a go at it every now and then ... over the course of a couple of weeks ... and that’s what it ended up taking me – weeks! 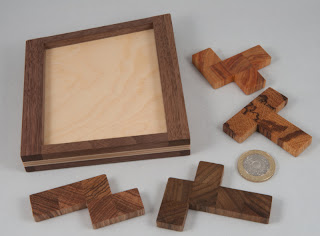 Toward the end of that little journey, I’d managed to find a satisfactory solution for one side (and taken a hasty photograph of it!) and then switched to the other side, which then took quite a while ... along the way I found a sort-of-solution that fitted into the frame, albeit rather tightly, and with a couple of little gaps in among the pieces – but I decided that was unlikely to be the solution as it wasn’t ‘elegant’ – and I think Stewart Coffin’s puzzles should all have elegant solutions. I had a chat with Nigel who’d confessed to having solved his already and he agreed that gaps probably weren’t desirable ... so I spent another week or so fiddling with it every now and then until I eventually managed to bungle across an elegant solution – no gaps and the pieces are a loose fit in the frame.

Victory! In fact solving that second side felt that good that I felt the need to announce it on Facebook – which took some folks by surprise as it was just about the first thing I’d said on there in a years!

Tom has done a great job on this puzzle – the pentominoes are each made in a different hard wood and the tray has the puzzle’s details etched on the one side so you can’t forget what it is!  And it goes without saying that it’s another cracking design from the legendary Stewart Coffin!