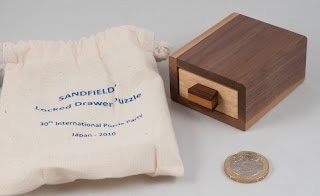 This brilliant puzzle was Robert Sandfield’s exchange puzzle for IPP30 in Japan. It’s beautifully made by Kathleen Malcolmson who also had a hand in designing it... and when I saw a few of them on Robert’s table at the best puzzle party (cue Jeremy Clarkson tone) in the world, I took one straight away (and paid for it as well!).

It comes in one of the usual Sandfield-branded draw-string bags and it’s a reasonably unassuming little box with a drawer on one side of it. Something inside rattles, a bit like a coin. The drawer is a bit looser than I’m expecting given the puzzle’s name, in fact you’ll find that it pulls right out – which is a real surprise given that it’s Sandfield’s Locked Drawer – until, that is, you pull it all the way out and there’s a little click, at which point you realise you’ve been had ... NOW it’s locked – locked OPEN! 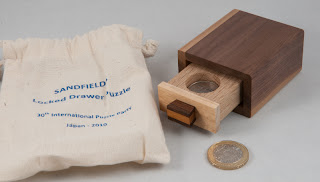 ...and that’s the start of the little odyssey... you have an open drawer with a coin in it, assuming you didn’t open it upside down, in which case there’s now a coin on the table! Try turning it upside down, spinning it, or even blowing gently on it, nothing seems to help. Shaking it brings up some new noises though... intriguing – where was that before?

From there on there’s a great little journey of discovery to find a few useful tools, some hidden places, a weird mechanism that won’t do what you want it to ... until you understand it and then ultimately a series of steps to return the box to its original state, ready for the next victim.

A beautifully disguised little sequential discovery puzzle that packs way more discovery than I was expecting – and I love giving it to folks and telling them what it’s called and watching the look on their faces range from “That’s not a puzzle, it just opens” to “Oh ... bugger!”.

Does that make me a bad person?
Posted by allard at 17:25