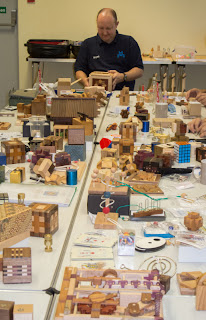 I have discovered what I believe to be the only downside of attending an IPP – ignoring for the sake of argument the handy shortcut to poverty it provides – and that is the fact that there is just so much to blog about, so many new puzzles to acquire and play with, that you don’t write about the other events after it!

So here I find myself having returned from IPP in August, attended MPP7 on the 8th of September (see how we did that without even trying:  MPP7 on the 8th of the 9th! - unless you're American... ), having gone to a Gathering for Gardner at Laurie’s place this past Saturday and about to head out to the official MPP8 next Saturday at the Dutch Cube Day in Holland ... and I still haven’t blogged about the last MPP ... highly remiss!!

Little voice from nowhere in particular: "Rectify immediately! ...and then get back to talking about all the other puzzles you still have on the “To-be-blogged” shelf " – which is right next to the “To-be-solved” shelf, although the latter is somewhat better populated at present than the former!’

MPP7 followed the usual recipe of emails out to all the usual suspects, some posts on the Revomaze forum inviting all comers and some personal appeals to all the new UK puzzlers I met at IPP.

Nigel took care of the arrangements and we had a sizeable room in the Warwick community centre that we’ve used a few times in the past. He laid on the usual assortment of hot drinks and the trusty MPP kettle did great service on the day. Previously we’d arranged the tables around the edges so we ended up unwittingly with folks sitting facing the walls with their backs to one another solving puzzles (OK, it wasn’t quite that anti-social!) but this time we set up one long wide table in the centre of the room and everyone crowded around it – so the natural inclination was to sit facing one another the whole time – much better! More opportunities for banter and blogger-baiting (insert name of favourite blogger-target here!).

Chris had brought his dad, also a keen puzzler, along for the day and he threw himself into solving a goodly number of serious challenges ... including one or two that I’d brought along because I hadn’t been able to work them out yet! One of those was Wil’s IPP Commemorative Cola Bottle that I’ve already written about – he launched himself into that one with no signs of fear at all. I’d been eyeing it out for a couple of days thinking to myself “I’d better not take that one apart in case I can’t put it back together again before Saturday and Wil’s asked me to show it to everyone”! Similarly he made really short work of Coffin’s Rattle ... the man is a puzzle-solving machine – and I’m guessing that some of it runs in the genes – because that would definitely explain some of Purssell junior’s prodigious puzzling powers! 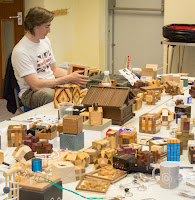 I’d taken my copy of the Stickman Milestone Puzzlebox and few folks managed to work their way through it and then leafed through the book as a prize for opening it – and it was interesting to see that everyone spent quite a while tracing around the mechanism and testing little movements before they eventually found the “first move” – and then loosened up a bit and enjoyed playing the mechanism backwards and forwards.

Nigel had his Super-Cubi and King-Cubi there and for a while the room was filled with gentle click-clacking as Rich worked his way through 1536 moves in one direction, and then the same again in reverse ... and Nigel gave us an impressive demonstration of just how fast it can be done – but he’s had a little practice!

We were joined for the first time by Frank Potts who I’d met in Washington DC. Frank arrived with a suitcase full of puzzles for sale or exchange (Yes, we all descended like gannets!) as well as a couple of special delights for us to play with – one of which had been on my “To be lusted after” list for a while – The Minotaur’s Burr – his own design made by Brian Young as a limited edition in 2009.

On the outside it looks like a fairly innocent three-piece burr – albeit a rather large one! Start playing around with it, however, and you pretty soon realise this is a seriously mythical beast indeed. Two of the pieces are joined in the centre by a maze and the third piece has a rod in the centre that needs to be moved through the maze to free the pieces. Nigel made pretty short work of it, as did a couple of the others.Me? I played with it for a while and got it open a bit, then chickened-out and closed it up again! ...Frank, if you’re ever looking for a good home for a spare copy, give me a shout! :-)

One of the scariest things I saw at MPP7 was the sight of Rich demolishing and then rebuilding some very high level burrs, and then talking about playing around with monsters like Tiros and Lange Wapper like they were old friends... that guy is fearless when it comes to high level burrs – taking one of them apart, mixing up the pieces and then rebuilding it while holding a conversation with the bloke opposite him... very scary!

Oli did his usual good service at showing me how to solve some of my puzzles (thanks!) and humbled me with one of his puzzles – a copy of Rik van Grol’s Bin Laden Puzzle – which suckers you in behaving just like a neat little implementation of the Gray Code – until the end – which never quite comes until you work out just how sneaky this little puzzle is ... it took Chris and I a little while to work it out, but we got there in the end. (And I don’t think I slowed Chris down too much!)

Adin had good time playing with a copy of Wil’s Exchange Puzzle ... Joe spent a while on a copy of the Plugged Well and Kevin managed to find a couple of entanglements he didn’t already have among Joe’s haul. 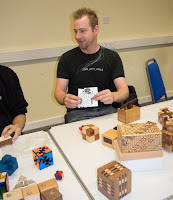 One puzzle did come away totally unscathed on the day: I’d taken a copy of the Six of Diamonds along as I’d had absolutely ZERO success at it until then ... and a few good folks had a bash at it and retreated, leaving it in bits for the next person to attempt it ... and a couple of months later, it’s still unassembled – and I suspect that I might need to trouble one J Dalgety for a solution to that one... it is a monster!

Another excellent day’s puzzling – superbly organised by Nigel and thoroughly enjoyed by the rest of us! Thanks mate! 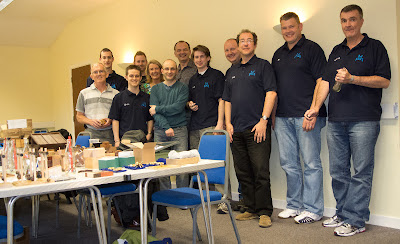 [...yes, our Dutch stalwart couldn't  make it to this meeting - but we're all going to his neck of the woods just after this post is published!]
Posted by allard at 07:50