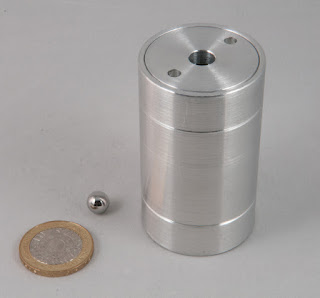 I’ve been reading Jerry’s puzzle blog since he started writing it back in June 2011. We seem to share a love for similar sorts of puzzles so it’s always a pleasure reading his points of view and thoughts on puzzles that I haven’t come across yet – and for getting another point of view on the ones I have.

Back in November last year he wrote about a puzzle that he’d designed and had made up - the RevoLUTION Ball Puzzle – consisting of 6 metal disks that formed a maze, the object was to get a ball bearing from one end to the other by manipulating the disks relative to one another ... and judging by the pictures there were a lot of dead ends in there! In that post he mentioned he’d designed a second puzzle and was in the process of getting it made up...

...and then a little before Christmas I had a note out of the blue from Jerry asking me for my address so that he could send me one of his new puzzles as a Christmas present, in return for my thoughts on the design – and so it was that a little package arrived from Singapore about ten days later.

The handsome little brushed aluminium cylinder looks every bit the professionally made puzzle. Mine came with a little bit of tape across one end and a little ball bearing in the single hole visible under the tape, and tilting the cylinder back and forth you’ll notice there’s something inside that goes backwards and forwards and bashes up against the taped up ball bearing. Being the cautious sort I dropped Jerry a note and asked if I was allowed to remove the tape – silly question! – Yip, remove the tape and a ball bearing pops out... OK drop it back in again and roll it out – so far so good – I think I understand this thing – repeat the exercise and the ball bearing stays in there... uh oh! 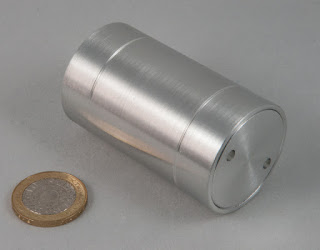 OK, now I’ve locked it ... the ball bearing is inside and tilting it backwards and forwards just rolls something else around ... but hang on there’s a new sound in there now – the sound of a ball bearing running around in circles! Guess where my original ball bearing is now!

...and that’s where it stayed for about half an hour! Not because I’d lost interest, but because I couldn’t get it out! It stayed firmly locked inside there until I had a very close look at the puzzle and then fired up a couple of the little grey cells and a couple more of the senses ... which led me to notice something very subtle ... and about a minute later the ball bearing bounced off the desk and landed on the floor – success!

At which point I did what every puzzler does – threw it straight back in again and gave it a swish ... confirmed it was solidly in there... and then repeated the process! A-Ha! Gotcha...

I jotted off a quick email to Jerry and described how I’d solved it and what I thought was going on in there ... and the following morning he very politely told me that I was pretty close, but I’d imagined one thing the wrong way around... and of course it makes a lot more sense his way than mine!  [Mine would have been 50/50 ... his always works! :-) ]

I think it’s an elegantly simple puzzle – nothing is over complicated but it will provide a nice little challenge ... it’s very nicely made and looks the part among all the Strijbos puzzles in the collection (and that’s meant as high praise!). 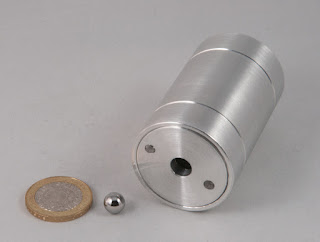 Jerry, if this is only your second puzzle design, I think you’re going to produce some absolute crackers if you decide to carry on designing more in the future ... please do!

You can read Kevin’s thoughts on Jerry’s Ball in Cylinder over here and if you’re interested in getting hold of one of them, please contact Jerry via his blog (there’s an email link on his profile page).  He’s already mentioned that his initial run of 15 have all gone, but I’m sure if there’s enough interest, he’ll think about getting some more made up... go on and badger him! You’ll enjoy it.

Email ThisBlogThis!Share to TwitterShare to FacebookShare to Pinterest
Labels: Jerry