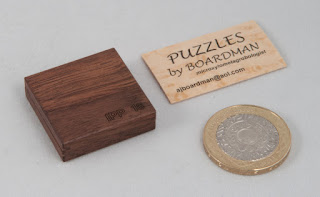 I was fortunate to meet Allan Boardman at IPP32. On his tiny 45mm x 25mm business cards, Allan describes himself as a microxylometagrobologist - or a micro wooden puzzler if you prefer – there’s a clue in that the tiny business card is printed on paper thin 2-ply Birdseye Maple.

Allan has been making micro wooden puzzles for years and has produced a range of well-known puzzles in minute scale... every serious puzzle collection really needs to have at least one Boardman creation in it ... or that’s my theory (or rather excuse) at least!

Fifth Avenue was designed by the great Nob Yoshigahara and it consists of a 5x5 tray with a set of 2 dominoes and 7 trominoes (giving you a total of 25 tiles) with various combinations of five woods. The aim of the puzzle is to pack the pieces into the tray such that each row and each column of the resulting square has each type of wood represented only once. Sort of like a mini Sudoku, in wood ... except that the way that Nob has joined those pieces means there’s a unique solution – ignoring rotations and reflections... which makes it rather non-trivial! 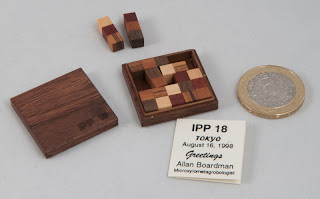 Allan’s version – his IPP 18 exchange puzzle version, comes in a walnut box that is a mere 32mm square and the entire box is only 9mm tall ... yet there are slipfeathers on all of the corners, there’s a lip inside the box and a sheet of instructions nestling on top of the pieces inside. The pieces are made up of 5.5mm cubes in five different hardwoods. The craftsmanship at that scale is quite simply staggering.

If you’re interested in making a copy of your own, pick up a copy of Allan’s Puzzle Projects for Woodworkers – mercifully the version in the book is 4 times larger than this little guy!
Posted by allard at 17:33