A few weeks ago Wil Strijbos sent out one of his customary email newsletters with a bunch of puzzles available for sale. One of the puzzles that caught my eye was one that I'd been meaning to get for a little while called the Lock 250+, so I asked Wil to put one aside for me and he duly brought it over when he came to join us at MPP11. 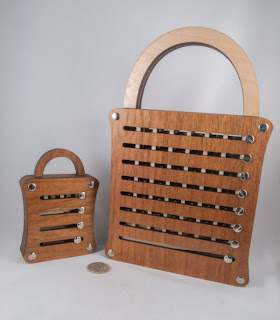 It's a neat looking lock-shaped n-ary puzzle made by Jean Claude Constantin in laser-cut plywood. The outer panels are all veneered and it looks reasonably innocuous - although there's an ominous clue in the name that there may well be c.250 moves to open (and then another 250 moves to close) this puzzle. Looking between the slots in the sides you can see a series of internal plates that are moved up and down through the interactions of the steel sliders. The bottom slider is pretty much free to move left and right all of the time and the plates interact to allow each successive slider to move one place until it completes a full transit, allowing the next slider to move one space along... repeat until open...

At MPP11 Kevin had brought his copy along and reckoned that once you got into the rhythm of a particular n-ary puzzle, they became pretty mechanical and didn't take long to solve at all... mere minutes for this little 250-ish move version...

At that point Kevin made a fatal mistake - he engaged Wil in a conversation about the fact that the highest order n-ary puzzle currently out there was "only" around 4000-odd moves (the 7-ary Kugellager puzzle) - now I knew what was coming (having seen the monster the night before) and played along a little coaxing him to suggest just how high he might like to go... he plumped for c.6000 moves... and with that Wil introduces a special collectors' edition fresh from the Constantin workshop - dubbed the Generation Lock, it's a slightly larger version of the Lock 250+ .... slightly larger... OK, I lied ... it's huge! (and we all know that size isn't everything...)


So how do they compare? 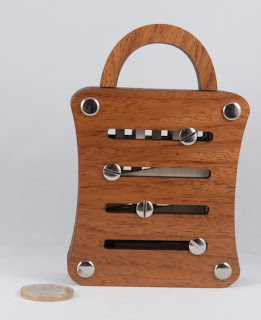 Think about the number of discrete positions and moves on the Lock 250+ : each of the three main sliders has 6 positions (including the start position), so each has to make 5 moves... and each one relies on the previous slider having done one complete left/right transition also taking 5 moves (except the bottom trivial slider) ... so I think that means that in total you need [2*(5^3) + 1] moves, or roughly 251 of them - which sort of lines up with the thing's name, so my sums may be right... but I'm not good with sums, so don't take my word for it... OK, so assuming that you can do roughly one move per second, you can open little brother in a little over 4 minutes... [See below for the right figures!]

Now let's consider big brother - 15 positions gives us 14 required moves per slider, and 7 sliders means that the total number of moves required should be of the order of [2*(14^7) +1], which is a bit larger ... about 210 million moves ... and if that doesn't quite put it in perspective, at a move per second on average, that's 6.7 YEARS - AS LONG AS YOU NEVER TAKE A BREAK.  [See below for the right figures!]

OK, hopefully that makes the point - it is totally BONKERS!

So bonkers in fact that you're probably never ever going to actually solve this one - not in one generation anyway ... see where the name comes from now?

Having introduced it to us, a couple of us duly threw some cash at Wil and ended up taking home a really unique, if not totally bonkers puzzle lock... 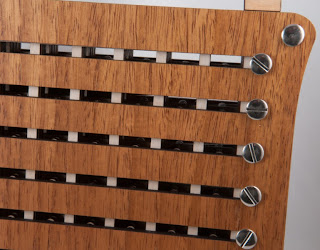 I've spent a little while exercising the mechanism. (I don't think you ever seriously set about trying to open things like this, you can only hope to exercise the mechanism a little in the right direction and head towards the solution... but I suspect that it's not going to feel like it's coming closer for a very long time!)

Since acquiring our Generation Locks, Wil's been back in touch with us to let us know that the locks will have their name laser-etched on the front in future and he's given us a fantastic suggestion for the puzzle equivalent of a log-book to track who has helped us to ultimately open our Generation Locks.

Given that it's going to take many, many years to open, what better way to track your puzzling meetings than have everyone put in a couple of moves on the puzzle and sign the log-book ... so I think that I shall be instituting exactly such a rule for all visitors to the puzzle cave... and sit back and watch my puzzling mates open this monster for me ... over the next forty years or so!

ERRATUM - Thanks to Goetz Schwandtner for pointing out (very nicely) that all my calcs were totally wrong! And that there are one or two subtle differences in how the mechanisms work so that they actually behave slightly differently ... the net upshot of which is that Lock 250+ could in fact have been called Lock 310, and the Generation Lock requires about 341 million moves... or 10.8 years at my mythical move-a-second - read his analysis over here.  Thanks Goetz!!
Posted by allard at 21:02