It feels like ages ago since I visited Wil Strijbos for his last-in-a-while-Queens Day Party, and I still have a few thank-you’s to say... so here goes: 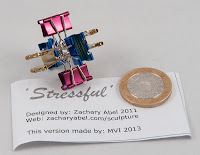 Thanks Michel for the mini-Stressful – having made a few larger ones, I can only imagine how fiddly these little guys must have been to make ... and at least I didn’t have any of them actually break in half on me(!). It’s sitting next to the bigger, clumsier ones that I made a little while back...

Thanks to Wil not just for a wonderful day’s puzzling and a fabulous Chinese meal afterwards, but also for the three little laser cut interlocking assemblies... two of them come with a picture of the target shape (both dodecahedrons, if memory serves) and the last one asks you to make something beautiful with the pieces...! 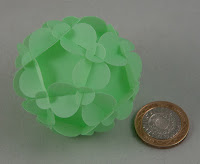 The green one (“clover”) goes together fairly easily and the pink one (“cherry blossom”) is a bit trickier as the overhanging edges are a lot larger and tend to get in the way and confuse things a bit more... I thought I’d finished that one and on inspection found that quite a few of the joints hadn’t actually been properly put together ... lovely little assembly challenge – particularly for us ham-fisted types! 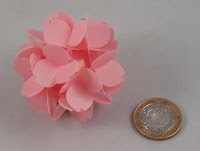 The third one consists of 10 yellow triangles, and as I discovered after a while experimenting with various forms, the cuts aren’t all made equal (if you stack the other two sets of pieces in any orientation, the cuts always line up...with these ones, you need to rotate them to get them all to line up....) – OK so having noticed that, further exploration was a bit more fruitful and I realised that I could do something interesting with about half of the pieces ... and then added the second half in a similar vein, et voila – it’s beautiful ... and a little surprising!  Thanks Wil 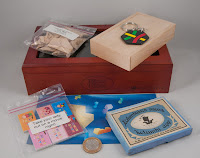 Going back a little further even, I owe Tomas Linden a huge THANK YOU for all the extra goodies he included in my last order...

There was a large extra white box in with my last order and that turned out to be protecting a really neat wooden display case with a glass lid perfectly sized to fit three Hanayama Cast Puzzle boxes... inside there was a whole heap of extra puzzling goodies.

The first thing I noticed was a serious collector’s piece – an old Columbus Egg tangram puzzle, complete with its original packaging and challenge booklet ... I suspect that has just become the oldest puzzle in my collection – and it’s still in great nick. 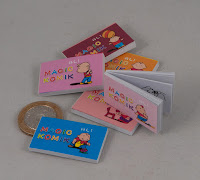 There was also a fairly non-descript puzzle box that I recognised as one that Oli had brought to one of our very first MPP gatherings at my place a couple of years ago ... I think it’s an Alan Boardman design that it deliciously simple, yet thoroughly bamboozling if your haven’t seen it before – it fooled me for ages when I first saw it so I’m really chuffed to have one of my own now to inflict on the unwary ... rattling around inside it was a Tantrix key ring ... as I’d just ordered a set of the Tantrix Match puzzle sets in that order... (and I’ve been working my way through those on this cruise).

There were a couple of interesting little plastic baggies – one with a sticker on it saying “Take your lady on a movie night” – and inside there were six little flick-books each with its own fun little animation ... 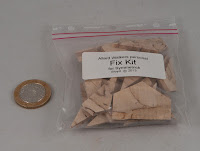 The second little baggie had stacks of little odd-shaped pieces of curly birch (?) ... and the label explains this to be “Allard Walker’s personal FIX KIT for Symmetrick | Sloyd (c) 2013” – after the hard time I gave Tomas about how hard Symmetrick was as a puzzle, and how long I spent trying to build three dimensional solutions to it (in my defence, he has form there!) he’s given me a set of extra pieces to enable me to build just about any shape I’d care to build – now even I should be able to make something symmetrical flat on the table! Love it!

Thanks Tomas – not only a lovely surprise, but some wonderful puzzles to add to the collection – thanks for helping me fill up that new cabinet I added to the cave.