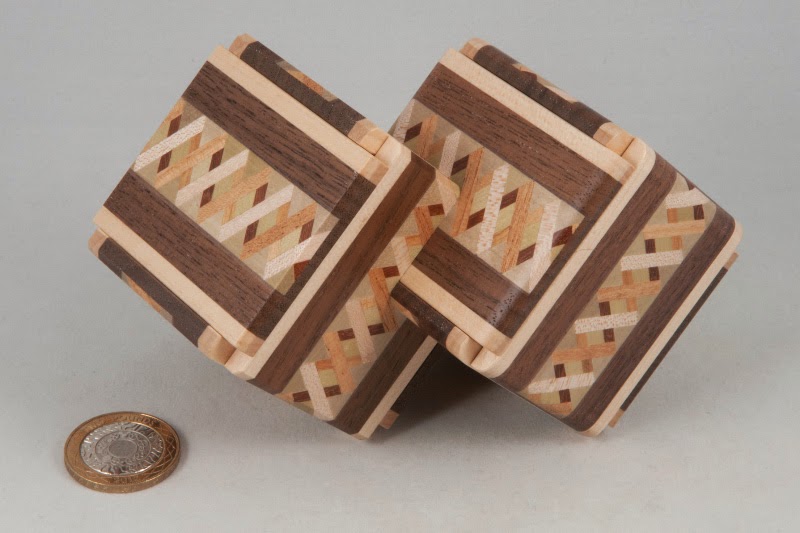 Satomi had some new things for sale at last week’s MPP and I found myself picking up a couple of new Karakuri boxes that I’d had my eye on.

Hideaki Kawashima has recently made a second run of Duet with some rather handsome custom yosegi sides. At first glance you have a pair of interlocked cubes, with the yosegi pattern hinting at the interlocked nature of the cubes and the eventual solution.

You’re told there are two compartments and a quick glance at the puzzle suggests how the panels are likely to move, and you might suspect that there’s something interesting in the bit in the middle where the two cubes are joined … there is, and it’s very clever indeed. 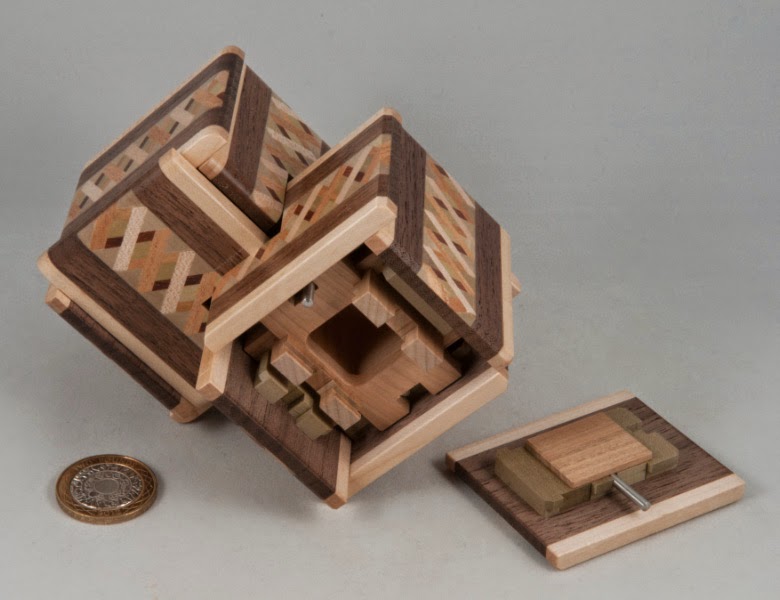 Finding the first panel to move is a reasonably straight-forward process of elimination – finding the second one brings the first little hint of the surprising nature of this puzzle – follow the process and you’ll fall into  a wonderful rhythm that lets each panel play it’s part until at move 24 you’ve opened the second of the two compartments.

I’m generally impressed by the craftsmanship and the engineering involved in these Japanese puzzle boxes, but this one is really clever the way it plays on the interaction between the two (almost) separate, yet very interconnected cubes.

And it looks way cool…

Another Binary Drawer is a slightly lager box from the fertile mind of Hiroshi Iwahara – he of Super-Cubi and King-Cubi-fame. One of my mates had bought a copy previously and I’d asked him what he thought of it. He described it as less of puzzle and more of a demonstration of the principles of the binary system.

Satomi had a copy of on her table so I hauled it out and had a play with it and I think Ali’s description was spot on! I bought a copy on the spot.

Usually when we talk about binary systems in puzzles we’re talking about Gray Codes … this time we aren’t – it’s pure, unadulterated binary counting.

The front of the box has a set of eight little drawers that open when the appropriate number is entered using the three sliders across the top of the box. The drawers represent the numbers zero through seven and moving each of the sliders they effectively register a zero or one on that binary place. 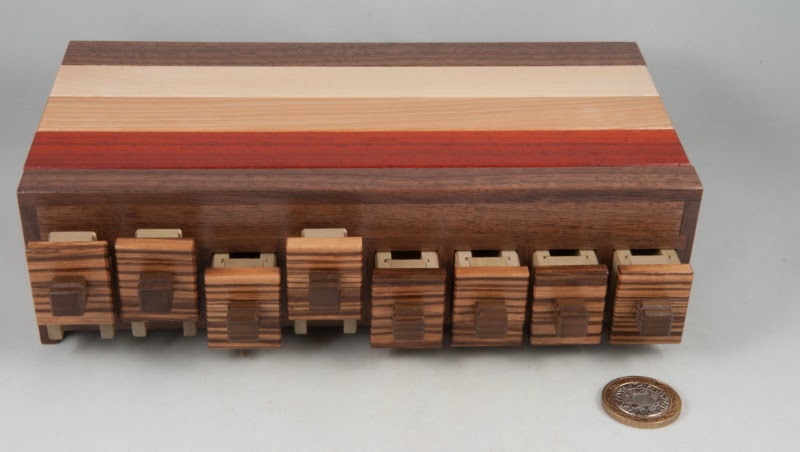 I was totally hooked on it when I tilted the drawers down and the first drawer slid out, and then each successive drawer popped out as I counted up to seven.  As Ali said this isn’t really a puzzle, it’s a real world implementation of counting in binary – but then even if you don’t know your binary, it’s a pretty simple task to get all eight drawers open.

[Neither box requires rotations.]
Posted by allard at 07:38