A while back I had an email from Rox asking how far I was from Warwick, and after a brief geography lesson (Rox, we hold MPPs in Warwick, it’s half an hour from my place!!!!) we established that she was coming to Warwick for a conference and might have a couple of days spare for some puzzling so I offered to put her up at my place either side of the conference and we’d have a braai and invite all the (reasonably) local puzzlers I knew around…

Now Rox is a veritable force of nature - easily an eleven on the Beaufort Scale. She blew into town last Wednesday evening and I collected her from the airport after a full day’s travelling from the Finnish hinterland. She’d done buses, trains and planes and had set out disgustingly early in the morning to get across to Birmingham, so when she arrived I got a huge hug as I think she was pretty glad to have finally arrived at her next base.

Gill sorted us out with some dinner and we all caught up before Rox and I headed up to the cave for some relaxed puzzling. Rox would root through the cabinets, find something interesting and then settle down on the floor to play and take photographs. We called it a night mercifully early as she’d had an exhausting day and I had to go to work the next morning and appear vaguely intelligible. (It’s a new thing I’m trying!)


While I was at work, the plan was for Gill and Rox to head out for some shopping as Rox needed a pair of smart shoes for a dinner and she hadn’t had enough space to pack a pair because she’d pretty much filled up her luggage with puzzles. Gill managed to drag her away from the puzzles eventually and by all accounts the shoe-shopping was successful, although during the course of the day I did get a series of pics on my phone of Gill puzzling and Rox in Gill’s craft room on the sewing machine… I suspect that Rox’s trip to the dark-side was short-lived because the next time I saw her, she wasn’t asking about sewing machines and all the talk was about puzzles again…

After the day with Gill, Rox went off to her conference in Warwick for a few days and I collected her on the Sunday morning for an unofficial MPP gathering-cum-braai at my place.

Chris had brought along a Rubik’s cube that needed its centres aligned (there’s text on most of the sides and some of them weren’t properly aligned even through the cube was solved). Although I used that as an excuse to bring down my Mindcuber – I knew it wouldn’t be able to line up the centres. While my little robot crunched and ground its way through a couple of cubes that were either too small or too stiff, Steve sat quietly playing with Chris’ cube until he’d sorted it all out and was able to give Chris his cube back with all the text properly aligned … thus dodging any potential OCD disasters.


Steve had printed a couple of copies of Stewart Coffin’s Fourth Dimension (Coffin #94) for us to play with. Steve’s been looking through Stewart Coffin’s designs to find ones that haven’t been made in large quantities because they’re particularly hard to make accurately (in Ap-Art, Coffin noted that he’d made four copies ) – and then throwing them at his 3D printers so that the puzzling world can enjoy them. He gave me a copy and challenged me to find the two symmetric assemblies and then gave Rox a special copy because he knew she would be pressed for space in her luggage – it was jumbo-sized!

Rox made sure that everyone had a bash at pulling David apart and rebuilding him and played with her Many Horses – although I have to admit that I never quite managed to make a horse that passed muster properly – all of my attempts had something rather significantly wrong with them… in spite of having 104 real solutions! I’m just not very good at puzzling!

I (partially) burnt some meat around lunchtime and everyone did their bit to try and reduce the pile of food we had produced – the braai seemed to go down quite well, although the enjoyment of the meat might have constrained the participation in the homemade cheesecake afterwards … which meant there were a few slices left for me during the week!


More puzzling followed lunch and I was rather grateful for Ali managing to manhandle a rather tight Bishop open (no comments, please!) although the new Rook remained firmly locked all day.


Several folks spent a while playing with the new (to me!) Waterfall Box and while they all enjoyed playing with the puzzle, it remained firmly locked up … Ali probably came closest although at one point when he thought he was making good progress he realised a little too late that he’d been going in the wrong direction and had the box right back at the start position.

Louise had us in stitches after she successfully, albeit rather unconventionally, solved Wil's Dita Perrier bottle, assembled it rather hurriedly and then suffered a malfunction of sorts that saw the bullet in bits and a crystal penis roaming around inside the bottle... now if you know this particular puzzle, you'll know that spells Trouble (yip, with a capital "T"!). True puzzler that she is, she managed to extract everything, legally, no less, and then reassembled it properly.

Russ and Adin spent a while twiddling purple Revomazes and there was a little bit of discussion about the first of the R2 Revomazes, which didn’t seem to have found much favour among the MPP-crowd who’ve partaken in them. I spotted an opportunity and harangued Russ into taking away my unopened (literally still sealed in bags!) Titanium and Handmade (v2) Revomazes and solving them for me. After my experiences with the first Handmade Revo, I can’t bring myself to invest time in solving the next one and the Ti…I know I’m only hurting myself…

Some of the guys left around 6-ish and we ended up serving another round of braai to the folks who stayed behind… significantly reducing the pile of leftovers to manageable proportions. Yet more puzzling ensued…until the last bunch left at around 10 o’clock. Long day… FUN DAY… but a long day.


We all crashed pretty soon after that (Rox was after all operating on about an hours sleep from the night before) and then in a large reversal of roles, I found myself sending Gill off to work while I had the day off to make sure that I got Rox to the airport on time.

Rox and I trawled through a few more puzzles in the cabinets – notably Peter Hajek’s “What Now?” box: it was great fun watching Rox talk herself through her options along the way before committing and then solving the box. Rox took stacks of pictures of the cabinets and all the individual puzzles that pulled out… judging from the number of pics that she’s subsequently posted on FaceBook, she’s taken more pictures of my puzzles recently than I have!


I managed to get her safely to the airport and heading away on the next leg of her European trip before going home for a wee rest.


It was great having Rox around, fun spending time puzzling with her and excellent to be able to introduce her to some of my puzzling mates over here. Thanks for coming to stay, Rox and thanks a stack for all the pressies you brought over for Gill and I. 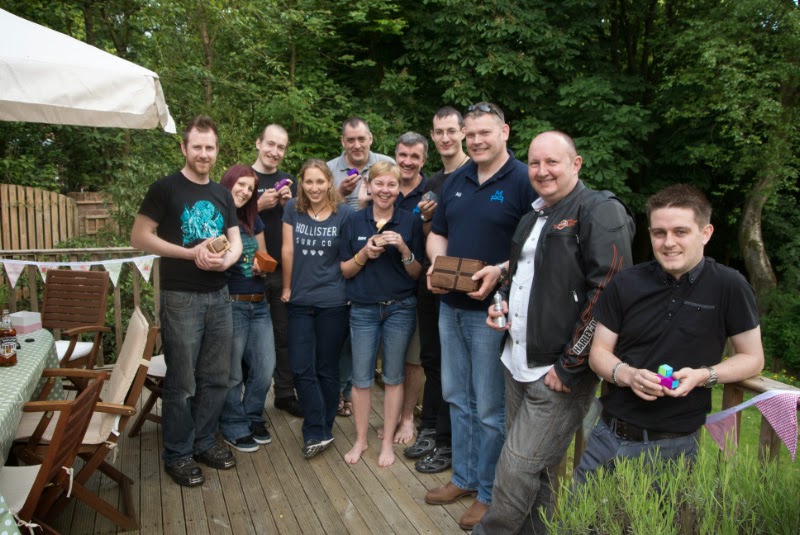 [For another point of view, have a look at Rox's version of events over here!]
Posted by allard at 21:58