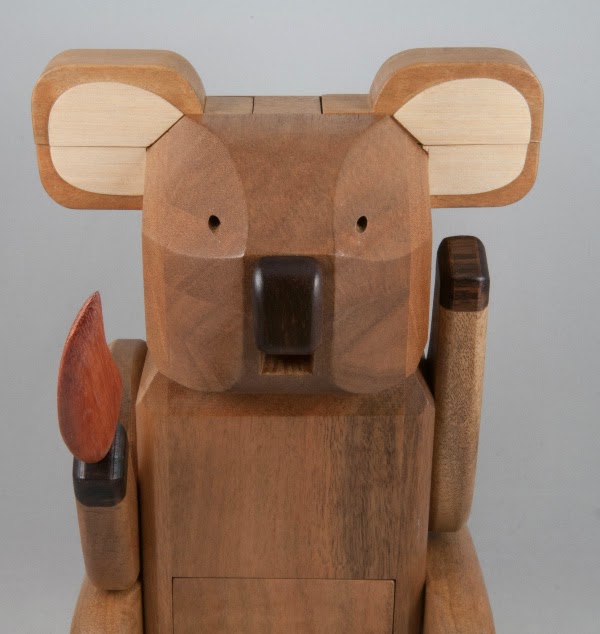 Simple – when I can’t really find anything to write about it that wouldn’t give serious hints to the solution, but I want to write something about it because it really deserves to be known about!

That’s the dilemma I face with both of Brian Young’s limited editions from last year… they’re both awesome (in very different ways) but if I say almost anything at all, I’ll be spoiling the puzzle for others… so I’m going to say very little and just give you a couple of pics to whet your appetite and leave the rest to your vivid imaginations!

Brian first made a set of limited edition puzzles back in 1993 and when I chatted to him at IPP in Narita last year, he was clearly very excited about the puzzles he was planning for his 20th Anniversary Limited Edition. One of them had been entered in the Nob Yoshigahara Design Competition and he was chatting rather animatedly about the other – a koala bear – whose design hadn’t quite been finalised yet, but from some of the ideas he had, it was pretty clear that it was going to be EPIC! 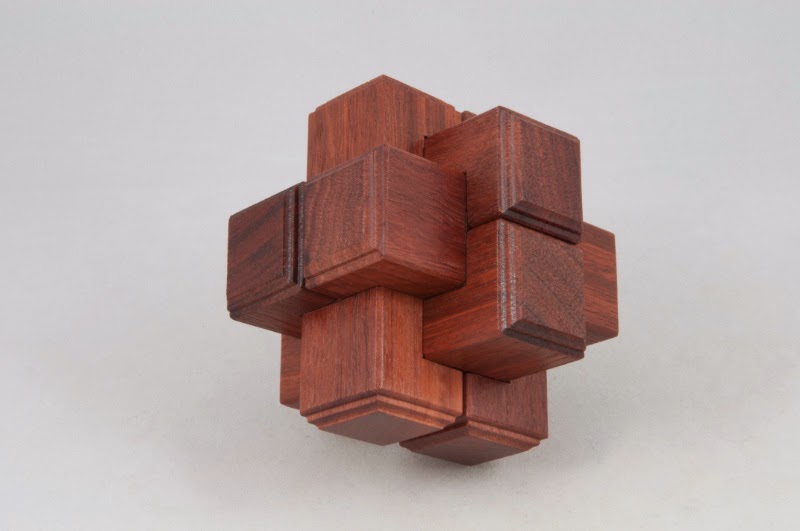 I had a bash on the competition version of “Six of One, Half a Dozen of Another Burr” at Narita and got virtually nowhere. Designed by Junichi Yananose, it is a very unusual burr, despite its innocuous outward appearance! This is nothing like a standard six-piece burr and I suspect that there aren’t a lot of puzzle makers out there who’d give this one a go…

Happily Brian did, and offered a run of 45 of them as one part of his 2013 Limited Edition offering – they sold out in 8 days… this is one of those burrs that I will be giving to people who think they’ve seen a six-piece burr and can’t imagine what all the fuss is about – after all they’re all just variations on a theme, aren’t they?

Let’s just say that SoO, HaDoAB will rather quickly help them understand it ain’t necessarily so – and then keep them enthralled for quite a while! 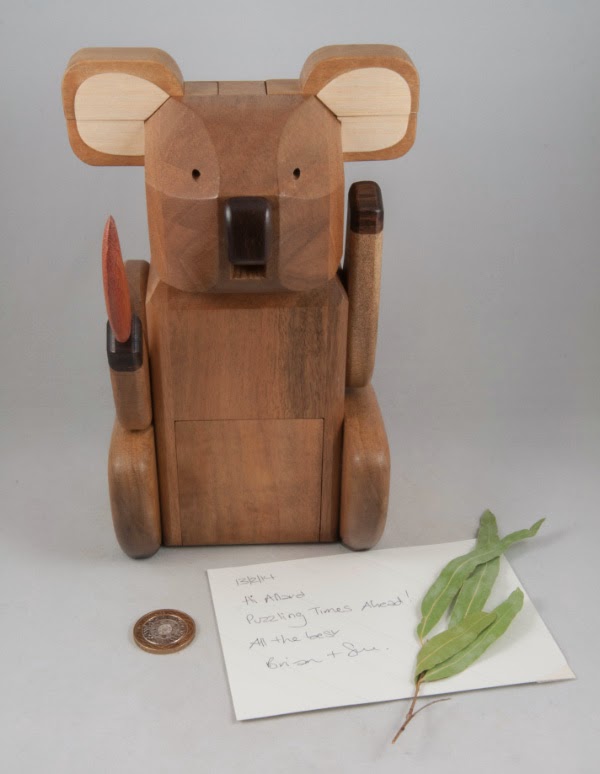 The second part of the Limited Edition is the real treasure though (sorry Junichi!) – Katie the Koala stands tall at about 23cm high and from her weight it’s clear that there’s a lot to her – anorexic she ain’t! Cute as a button, she most certainly is!

Katie was due to appear as a run of 65 puzzles … and in spite of her not insignificant price tag, she sold out in three days flat! Astounding… although if you’ve seen Brian’s previous limited editions, it’s easy to see why they’re so popular.

My copy arrived along with a sprig of gum tree and a postcard from the Gold Coast with the following message “Hi Allard / Puzzling Times Ahead / All the best / Brian and Sue” – puzzling times© indeed! :-)

It took me months to work my way through Katie’s various layers, locks and puzzles … several times I found myself stumped for weeks at a time with no idea of where to go or what to try next – I even had to beg Brian for some clues along the way – who knows how long it would have taken me if I hadn’t asked! 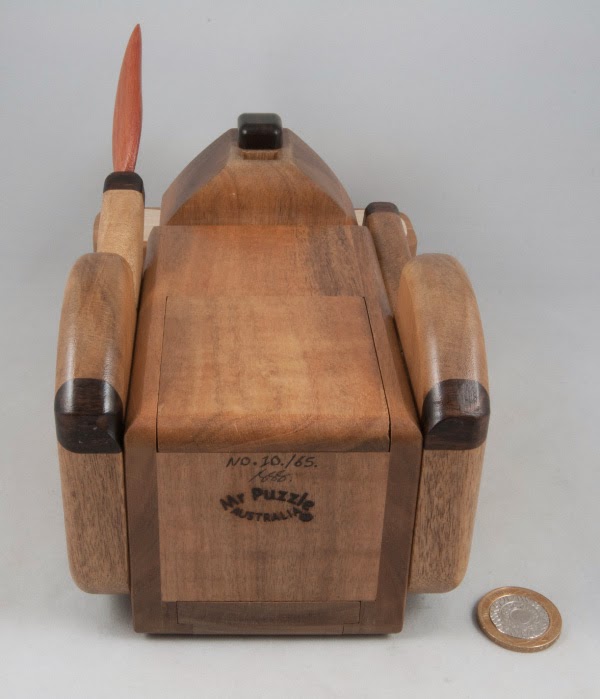 It really is an epic journey until the last compartment finally opens to reveal some of the gubbins inside and all of a sudden some of those weird things you’ve noticed along the way make a lot more sense.

When Brian was chatting about Katie in Narita he mentioned that he’d put a nod to Stewart Coffin and a nod to Stickman inside Katie and it was great fun to see them pop up as you wander toward a solution. There may well be a bit of Stickman and a bit of Coffin in there, but there’s also a boat-load of Brian Young in there – and it’s awesome!

As I said earlier, I’m pretty sure they’re all spoken for already, although if you drop Brian a note, he might be able to take a note of your interest just in case anyone falls off the order book – it’s going to be a good few months yet before the remaining Katies are completed and posted to their new carers.
Posted by allard at 15:04