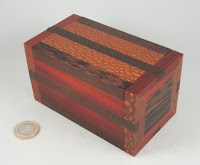 Stickman Puzzlebox #10 is better known as the Autumn Box – a quick look at the colours in the woods should explain that! The Padauk and Leopardwood have some glorious autumn colours to offset the rich Wenge in between them.

When you first pick it up you’ll find yourself drawn to the four central sliders with gentle dovetails that run the full length of the sides… you’ll find they slide quite freely and look like they should release the two ends depending on which way you slide them, except they don’t, always… sometimes they do, and sometimes they don’t. 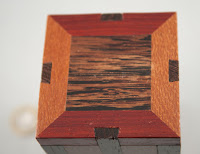 You see, there’s another sneaky little mechanism inside there that’s rather easy to overlook – and while some people might get lucky and open it quite simply – indeed, as I did the first time or two – until you understand the second mechanism and treat that properly, you won’t be able to open and close it predictably. 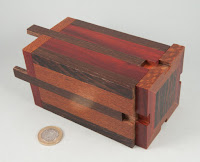 It definitely looks straight-forward and some will dismiss it as such, but it does need a little bit of respect if you aren’t going to rely on blind luck to open it every time… it makes me think of Animal Farm a little – not all of the animals were as equal as the others.

…and there are two compartments to find, which helps to reduce your chances of fluking the entire solve… you might be lucky on one of them, but the other is likely to trip you up.

Definitely a box of different levels – with luck you might breeze through it without being bothered by the second mechanism at all… if you’re unlucky it might really confound you for a while! 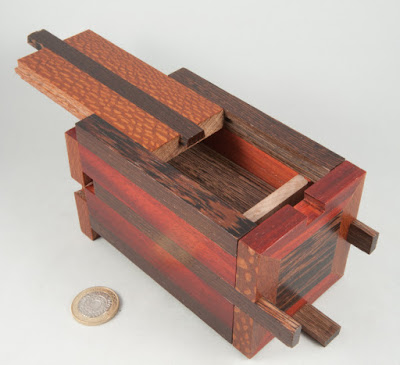 [Advance warning: I'm going to be traveling for a few weeks so there probably won't be any new blog posts for a little while...]