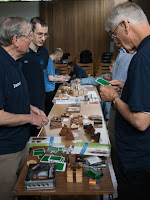 The eighteenth Midlands Puzzle Party just happened to coincide with the weekend before the start of Wimbledon this year … and a certain tennis-mad disentanglemeister just happened to be in town so he came along – actually we knew he was going to be in town and he’d be free that weekend so we organised it around him.

Bernhard Schweitzer had been threatening to join us at an MPP for a while and this date suited him and then three Austrian mathematicians who’d found us on the inter-web decided they should come over and see what all the fuss was about. Add to that the Coolen-clan coming over from Eindhoven for a long weekend and the stage was set for a pretty puzzling weekend.

Louis and family arrived on the Thursday afternoon after stopping off at Blenheim Palace on the drive over and I collected Dick from the station on Friday afternoon. When we got back to my place we spent a couple of hours going through some things that Dick had brought over for me (some unusual Gillen locks and a few Chambers pieces I didn’t have as well as some wonderful puzzle texts). When we’d gone through the things I was expecting to see, he started pulling out various other little treasures, so I ended up adding a special handmade lock and a lovely trick penknife (the first in my collection – could this be another slippery slope?) to my collection … and then the entanglements started coming … so I ended up with a sack-full of those as well!

It is fair to say that the shelves of puzzles-to-be-solved are now reaching capacity, so I either need to start solving them, pronto, or I need to allocate another shelf for them!
Georg, Astrid and Bernhard (W) arrived from Austria (via Germany) that evening and I dropped them off at their B&B. Saturday morning was a pretty early start as Bernhard (S) was arriving from Germany and needed collecting from the airport before we all headed down to the local village hall for the official off at 10am.

I made sure we got there a little early only to discover that a bunch of folks who’d come from a LOT further afield had beaten me to it… we got everything underway and then I headed off to the B&B to collect the mathematicians, who promptly embarrassed me with a puzzle I didn’t have (a beastly looking entanglement called Super G from Jean-Claude Constantin), a bottle of nectar and a box of sweets. By the time we returned to the hall, another bunch of puzzlers had arrived… turn-out was definitely going to be good in spite of it being a new venue.

I introduced the three new Austrian puzzlers to the rest of the gang and then unpacked my puzzles for everyone to have a go on. I’d just received a couple of new Stickman boxes so I was chuffed to be able to offer folks a bash at the Beast box, Three-lock box and the Autumn box. Over the course of the day I saw several folks having a go on them … and as I write this a week and a half later I still haven’t had a chance to play with all of them! (Write-ups and pics will follow when I have, I promise!) Georg had asked if I’d take along my copy of Wil’s Angel Box so it was there too, but I don’t think he got very far on it… :-(

Astrid picked up my copy of Closed Box fairly early on in the day and managed to get the pieces out quite quickly, but then spent a little longer putting them back in again. We suggested she leave it several times but she was thoroughly determined not to let it beat her and she duly triumphed and then moved on to another puzzle.

A little later she was having a go at the Danlock with several people egging her on to do what she didn’t want to … at which point she decided that she needed some privacy and took over the piano in the corner as her personal puzzle-space… where she duly beat the Danlock into submission as well.

Steve (M) had brought along a bunch of new puzzles, including a puzzle box from Kelly Snake called Crypsis… he’d set up a camera to video folks opening it and the reason why quickly became apparent when the first person opened it and let out a little yelp… of course many others fell prey to its ‘charms’ over the day and there are now a number of videos shared on FaceBook of various folks discovering the joys of Kelly’s latest creation… well worth a look, especially if you like seeing surprised puzzlers!

Bernhard Schweitzer’s first visit to an MPP saw him bearing gifts of a puzzle and a commemorative IPP22 Keyring for everyone attending … AND he was selling some wonderful puzzles as well. He’d given me a copy of the Six Iberian Lynxes (+) earlier that morning and over the course of the next day or two I took a number of other puzzles off his hands (purely to lighten his load on the way home, you understand!) – so I ended up with a Walton Cube, Closed Box, a Pelikan mini-Peanut and a Dovetail Burr as well… and that would have been a pretty decent MPP-haul if Steve (N) hadn’t also had a few things available for purchase… and Dick was offloading some of his things as well… so I ended up with a lot of additional puzzles over the course of the weekend!

Frank Potts went out of his way and brought along a number of wonderful treasures from his extensive collection of Kumiki puzzles. They were displayed separately on a table for all to admire, and play with… some absolute beauties on there!

He’d also brought along a fair collection of puzzles for sale from Potty Puzzles, including a number of rather large Pentangle coffee table puzzles. The hefty Tavern entanglement puzzles seemed to be pretty popular with the other guys as well…

James Dalgety had brought along several wonderful items for show and tell – I loved his aluminium copy of the three dimensional magic square cubes that Yee-Dian Lee had used as his exchange puzzle in London.

Satomi set up shop for a few hours but had to leave a little early than some of us were banking on, so I’ll have to investigate one or two things via her eBay shop instead of picking them up in person. 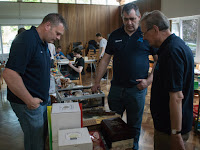 Lunchtime saw a major split among the puzzlers with most opting for either fish & chips or a pork bap from the local butchers who do a hog roast in the main street on a Saturday morning. One or two healthy souls opted for a salad or a sandwich but they were definitely in the minority!

Dick did a superb job of manning a registration table and managed to capture email addresses for virtually everyone there and then sent them around to everyone who’d attended afterwards – thanks Dick!

Adin paid us a flying visit and looked remarkably calm and relaxed in spite of the fact that he was getting married two days later and still had one or two things to take care of...

I spent quite a while playing with one of Bernhard (W’s) cube puzzles and didn’t get very far at all. I think he had three of them there – all similar sizes and made in plywood. At first all of the sides are stuck firmly in place and the object is to remove the sides… after finding some movement and then managing to use the space created to open up the next panel, I managed to make a little progress, even to the point of finding a useful tool, and actually using it… but then I hit a brick wall and managed to remove a single side only… good fun to play with and had me thoroughly perplexed!

At around 6pm I tried to start throwing people out … and about three quarters of an hour later I had succeeded and a few of us headed around the corner for dinner at the local pub before grabbing a couple of hours of chatting and puzzling with Louis back at my place.

Next morning I collected the B&Bers so they could come round to the puzzle cave and partake in a little more puzzling… with the Austrians duly spending the remainder of their time in Brum quietly puzzling away in the cave … they seemed happy enough!

I got to spend a couple more hours with Bernhard (S) after I’d dropped off the Austrians for their flights back home via Germany, and after I’d deposited Bernhard at the airport I headed home to solve some puzzles with some US puzzling buddies on the Black Letter Labs next artifact… I gave up on that after nine hours of solid puzzling before calling it a night…

Now THAT is what I call a puzzling weekend!