Wil first showed me a sketch of the puzzle about a year or two back… he had the idea more of les sorted in his head and he’d made a rough sketch of a padlock captured in some sort of frame – while it looked intriguing, there were no clues as to what the puzzle would actually entail – but there were enough interesting looking features in the drawing to know that it wouldn’t be a let-down.

Over the course of many, many months that sketch was turned into a 3D CAD drawing by his manufacturer and they began the long slow process of producing a working prototype. I suspect that there were a few incarnations before Wil was happy because it took quite a while before it eventually arrived in one of his usual emails offering a new puzzle for sale… by return of email I’d paid and asked for a copy and it arrived literally days later… just in time for my trip to the Gower peninsula… so along it went, along with a rucksack full of puzzles. 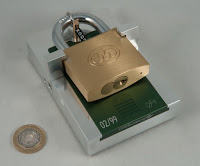 I’d been looking forward to it for ages, so rather predictably, on the first evening there, it came out of its lovely protective box and I began to play…

First impressions – it’s BIG! When I’d seen the sketches and indeed the pictures, I ‘d assumed this was a standard little padlock – it’s not – it’s actually a rather large padlock… and as a result the rest of it is also pretty large and pretty weighty!

Initial inspections show the machining on the back that probably contributed to the new name – along with three interesting looking little holes, which seem to have something behind them. There’s a green anodised plated beneath the lock that will presumably slide somewhere at some point, but for now it’s pretty well locked in place. The lock itself if cradled by a pair of pillars, one on either side and the shackle is attached by a strange pin to a brass pillar at the top of the puzzle… sitting on that pin is a plastic tube with the word LOCK on it – although someone has rather carelessly put it on upside-down, rather spoiling the aesthetics – pity! Or not… turns out your goal is to turn that plastic tube over and replace everything as you found it… 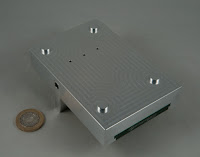 So we start fiddling and manage to work out how to get the first piece to move a bit – my inherent puzzling nature (or perhaps it’s my fundamental distrust!) makes me spend a little while understanding why it sometimes moves and sometimes doesn’t, and after a bit, I’m comfortable that I think I know what’s going on – and I’ve found my first tool! :-)

Use the tool to do the obvious and you’re rewarded with some more progress – in fact you might possibly even be seduced into thinking that it was all rather trivial… at this point you really should take a little time to appreciate the lovely picture of (no doubt!) a puzzler holding up a sign with the words “I hate Strijbos!!” scribbled on it – along with the letter ‘C’ in a blue circle – which is rather odd.

[At this point I’m going to take a bit of a commercial break:
It’s a good puzzle – get one!
Especially if you enjoy Wil’s sense of humour!
He’s a naughty man! In a very, very good way…] 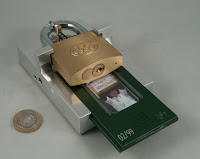 So what can we say… well, there is definitely pleasure in the puzzle – there are some wonderful A-Ha! moments… unfortunately, there may also be more than a couple of moments of sheer anguish when you realise that you have done something you almost immediately wish you hadn’t – and therein lies the pain… possibly quite a lot of it – indeed, possibly so much of it that your best bet is to get hold of the designer and purveyor and seek solace – which he seems to provide for a small fee… quite right! 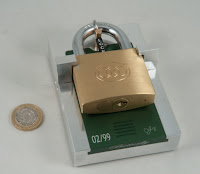 Having spoken to a few puzzlers, it seems to be a bit of a Marmite puzzle – I absolutely love it, even if I didn’t get the “full experience” – and some folks who did, aren’t that wild about it. It has been rather amusing to see just how many hardened puzzlers have needed help on this one…

Read Kevin's thoughts over here.
Posted by allard at 07:47