Gosh – we’ve had twenty of them now! All because a couple of us decided to get together and show one another the puzzles we’d found… now we get people coming from around the world, and sometimes even from as far afield as Sheffield!

MPPXX took place last Saturday (but one!) in our local village hall in Barnt Green – Louis had flown in the night before and this time the two of us actually managed to get to the hall before some of the early-birds from London had arrived! (The last couple of times they’ve beaten me to it and I only have a five-minute drive down the road!)

We opened up the place and began setting out tables while Angela set up her stall of little treasures to find new homes for… once we had the place set up I headed out to the shops to get some milk and cold drinks and found Tim in the parking lot making sure he was at the right place – I arranged a couple of quick introductions and headed off to the shops and by the time I got back he was duly set up inside and even more people had arrived.

Dale arrived with a small load of puzzles to swap or sell and pretty soon we had a row of tables of stuff for sale – an unexpected bonus as I hadn’t realised that we’d end up with that much for sale… I spotted a copy of Oskar’s Key puzzle from Hanayama from more than a little while back that I’d been looking for for a while and duly bagged a little bit of a bargain, although later on I noticed from some of the things that Chris had managed to find that I’d definitely missed out on some lovely little treasures…

The usual gang began arriving around mid-morning and by the time Jamie arrived we had literally dragged the very last of the tables into the hall… just enough for everyone!

Dave had brought along a bunch of unusual puzzles for us to play with and I ended up spending a while playing with his copy of Rex Perez’s “Don’t Worry, Be Jelly” – a 2D-packing puzzle consisting of a set of jelly fish to be placed inside a tray… a couple of people helpfully pointed out that Isobel had solved it earlier – however, despite their gentle goading, I got absolutely nowhere on solving it!

Steve had brought along a selection of his 3D printed goodness and pretty much everyone who needed a copy of Derek’s latest creations wasn’t left disappointed… Tweedle Dum and Tweedle Dee are positively evil in case you were wondering!

At one point there was a rather surreal conversation during which Ali admitted to having left a rather special puzzle in his van and when we asked him why he’d do that, he replied that it was in a bucket – as though that would explain things… well, it didn’t, so we sent him out to find the bucket and when he came back in again it made a bit more sense as he had a copy of Johan Heyn’s version of Casseiopeia by Peter Kaldeway – which if you don’t know it, is basically a large ball of wooden pieces…

Sometime later, there was some speculation as to whether it might fit around someone’s head – and as that would probably class as an impossible object, the local king of impossible objects was invited to test out the theory. After a short period of fitting (basically reconstructing the thing around his head) Ali had basically turn Oli into a sort of living impossible object – puzzler inside a puzzle – very meta! :-)

Louis had brought over a gift from Wil for me in the shape of a new/old Strijbos Bolt puzzle … I think this is probably about the second design in the series – it looks a lot like the first one, but is significantly tougher, and to some extent builds on the first one… there are enough visual clues to make you think it’s the same as the first one and I really enjoyed solving it on the Friday evening, and then took it along to MPP and didn’t really say anything about it, I just left it out for folks to play with – and had exactly the desired result when most people assumed it was the one they were already familiar with, only to see their expressions change and interest pique and then have to shift into full-on-puzzle-solving-mode. It seemed to go down rather well!

The piggy buns from Warwick’s proved to be quite popular again this time and a large bunch of us descended on their stall on the high street, all at the same time – the lad on duty did well to see us all off in pretty efficient fashion and no one ended up going hungry!

(Wee-)Steve had brought along his recently acquired Barcode Burr and several people ended up having a bash at it over the course of the day… he’d made up a great little custom box for it complete with laser-cut lettering – nice touch.

After I’d given him a hard time in my last MPP write-up about bringing back the last choccie biscuit as the floating trophy for all future MPP competitions, Oli duly presented me with a small mirror inscribed with “MPP / The last choccie biscuit!”  across the face and the back looks exactly like a chocolate digestive biscuit – so we have a proper floating trophy now! We just need a new competition… hmmm….

Shane had brought along a new design for a puzzle lock based on something that he hadn’t ever seen anywhere before… and he was keen to get some feedback on whether we liked it as a puzzle and whether we might be prepared to actually purchase one… he gave it to a bunch of us to try and Louis duly opened it first (SURPRISE!) and said several encouraging things about it… at some point it was given to me and I was quite chuffed when I managed to open it after spotting something interesting and applying the little grey cells – in fact I was so chuffed, I duly wandered over to Shane and locked it onto his jacket as proof that I’d opened it. Ali also liked it and Chris managed to open it (just) before Shane left too… and I suspect that there was a full-house of positive feedback and some encouragement to manufacture some of them for sale – I will definitely be buying a copy.

Oli was dishing out copies of a puzzling little curiosity – a children’s toy with a sabre wielding chap whose sabre appears to pass clear through an obstacle placed in the way - Thanks Oli!

Simon had brought along a large bottle of Helium, as one does, and then spent a good hour or so in the afternoon assembling a giant slightly-lighter-than-air shark and piloting it around the room… we all had a go and by the end of the afternoon, pretty much everyone had had the experience of having a rather large shark creep up on them at head height – hopefully Sharkey made it safely back to Ali’s kids because it wasn’t going to fit in my car and I’m not sure how the pups would have reacted to the sight of a large fish wallowing around in mid-air – Thanks Simon – it was a lot of fun playing with that in the hall!

Yet another pretty fun day’s puzzling for all before we turfed them out of the hall around 6 that evening… these things are fun – we should definitely do that again! :-) 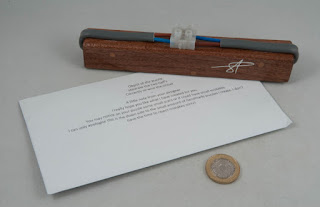 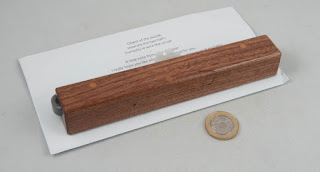