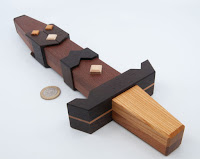 That’s the only way to describe the first one: Sword from Hiroshi Iwahara!

It’s clear the Karakuri craftsmen were allowed to give absolute free rein to their designing muses when coming up with their entries for an exhibition entitled “Karakuri Experiments” – Iwahara-san has imagined something that wouldn’t go amiss in a Zelda adventure – right down to the subtly pixelated look of the sword.

The (wooden) sword arrives safely secured inside it’s decorated wooden scabbard – it wiggles around a fair bit and teases you quite a lot. Your goal is to safely remove the sword and not give yourself a nasty nick in the process… OK the latter might be simpler than the former.

It’s not super-hard as a puzzle, but it is a delightfully whimsical creation that will put a smile on every single solver’s face, guaranteed… and it really stands out in the puzzle cabinet! 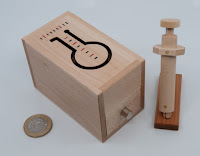 He gives us a box with an outline of a flask on the top and an apparent drawer on one side. The flask has a bunch of strange markings on it that don’t make an awful lot of sense at first… and then there’s the wooden syringe – well, why not?!

Some closer inspection shows a shiny little ball trapped inside the outline of the flask – that must be interesting, surely? Some medical experimentation will probably help and soon enough you’ll have the little drawer hanging open… once you’ve worked out what all those little markings really mean of course – you definitely aren’t going to fluke this one! 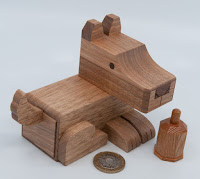 Last up in this post, from the same exhibition, is Conditioned Reflex – a little Pavlovian plaything from Yoh Kakuda.

I’m a dog person, so getting a puzzle that looks like a cute little puppy was always a no-brainer for me…  and then discovering along the way that it even behaves like a dog was the cherry on the top for me. Sitting still it looks cute, but during the solve it gets even cuter.

…definitely a whimsical bunch of boxes from the superb craftsmen at the Karakuri Creation Group.

I’ve been quietly buying copies of Phil Wigfield’s puzzles for a little while now – with the arrival of Bolted, I feel the need to share my thoughts and encourage others to support this man – because he makes damn good puzzles!

Phil has a shop on Etsy called MetalPuzzlesUK where he sells the metal puzzles that he designs and makes by hand. I bought a Sticky Barrel on Ali’s recommendation (the Monkeys are never wrong!) and thought it was quite cute… I enjoyed Spinning Tumblers and I was impressed by Phil’s work in Nuts – he clearly has skillz!

With the arrival of Bolted, Phil has seriously upped the ante and properly shown his puzzle-chops!

I’ll happily admit that I’ve been spoilt by being able to play with (and sometimes even solve!) some pretty awesome metal puzzles from the likes of said-Monkeys and folks like Marcel Gillen and Rocky Chiaro over the past few years – so I’ve probably seen more than my fair-share of puzzle mechanisms and I might even be a little jaded sometimes. (I know, hard to believe, eh?!)

…but I think Bolted stands out rather nicely in the crowd – this is a damn fine piece of puzzling engineering. There were some lovely new puzzling elements to this one that made me put on my proper puzzling hat to solve it, and when I did I had some serious respect for Mister Wigfield’s craftsmanship – the design is clever and the implementation is superb.

OK -enough of the fan-boy-ing…tell us about the puzzle!

Bolted looks just like a pair of bolts that intersect at ninety degrees with a few nuts on the smaller one which seems to go through not just the larger bolt, but also through the nut that is threaded onto it. Which is interesting… and clearly impossible… :-)

The two little nuts on the outside of the smaller bolt do indeed just spin off… but that’s the only gimme on this puzzle. Now the puzzling starts – and everything seems annoyingly legit at this point – those bolts do behave like they should, as do the remaining nuts … except that the one clearly goes right through the other one, and it won’t come out… 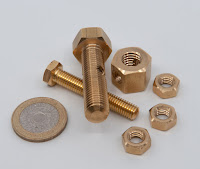 Find the secret and I defy you not to marvel at the bloke’s strong engineering skills, and his sense of humour at catching you a second time.

This is definitely going to be a puzzle I encourage visiting puzzlers to have a bash at because I think they’ll really get a kick out of it… it’s definitely worth picking up a copy of this one! 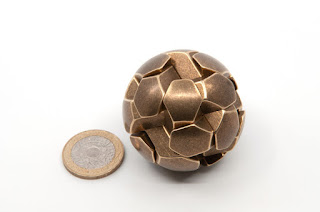 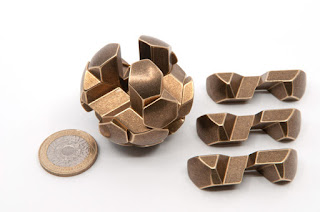 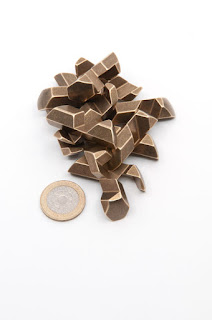