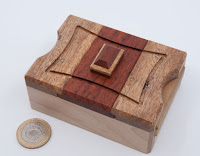 Fair warning: this is going to be a weird blog post… of necessity – because there’s not a lot I can really say about this one without giving things away…

I can say that it’s a bit divisive – like Marmite, which some people love and… well, some don’t… although in this case I think most people like it and in that sense, it’s weird because some like it for being a serious challenge, and some like it because it’s less of a challenge.

I just love it. Full stop.

It made me laugh, after I thought I was going to cry. Then it made me wonder, a lot, before it made me smile again.

The craftsmanship is excellent. The wood choices are lovely. It presents as a wonderfully honest puzzle, even giving you a view of the “joys” to come. It is classic Juno… and somehow he’s produced a design that is going to appeal to all sorts of puzzlers, no matter what their particular taste in puzzle styles and desired level of challenge may be – that is exceedingly admirable! 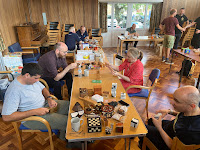 I’d been looking forward to last weekend for a long time: not only was it our second in-person MPP since lockdown, we were also going to be having puzzlers around to stay for the weekend… a proper full-on puzzling weekend!

Brian and Sue wended their way up from London and Frank and Jo braved the traffic from up north and they all arrived within about half an hour of one another on the Friday afternoon. We spent a while catching up on the last couple of years and then the puzzles came out!

Brian had shipped over a bunch of puzzles to sell or give away at MPP and he wanted to check on a couple of things, so we had him set up on the dining room table solving, resetting and occasionally adjusting his way through about a dozen puzzles. Once he was satisfied that they were all in good condition, he allowed Frank and I to select a copy to buy each and then wrapped the rest of them all up again for the MPP gang. 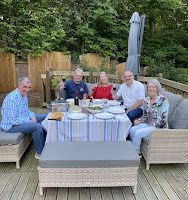 I got the BBQ out and ceremonially burnt some meat (you can take the boy out of Africa…) before we enjoyed dinner outside in what could only be described as a wonderful English summer evening. There was plenty of wine, some excellent banter and of course wonderful company. Things got quite competitive when Jo brought out a new game she’d acquired specially for the trip down. A couple of rounds of Corks brought plenty of merriment, lots of hilarity and only a couple of small scars.

Given all the travelling that day, it wasn’t a particularly late night as we were all keen to be able to enjoy Saturday fully.

On Saturday morning we managed to get everyone fed and watered before the boys headed off to the village hall and the girls headed off to a music festival in Worcester where Gill’s choir was singing. 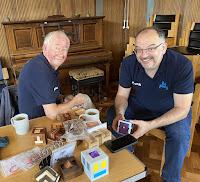 We got the hall set up, I laid in cold drinks and biscuits (lots of biscuits!) and folks began arriving from all around the countryside. Dale arrived first, followed by a car-load from London and a really tall bloke from Edinburgh in a really tiny car… Pretty soon it was all a blur, and the usual happy buzz of puzzlers getting (re)acquainted and occasionally picking up a puzzle to play with, took over.

Emily dropped Ed off for his more-or-less supervised day out with the puzzlers, and I made full use of the opportunity by first giving him some of my new Karakuris to whizz through (yup, he did whizz through them!) and then giving him my copy of Menace which had been eluding me thus far… I’d got the first half done but the second have was befuddling me. Having left him alone with it for a while, he duly solved it and then gave me a couple of hints enabling me to finally get through to the end of it…what can I say, the boy is pretty good at solving puzzle boxes!

Brian had set up a satellite Mr Puzzle shop and did a fairly brisk trade while giving everyone in sight a free copy of Frank’s F puzzle – a puzzle I hasten to say I’d solved last year in the run-up to Christmas and could not now, for the life of me, solve. (I managed it a couple of days later… it’s a good ‘un.) 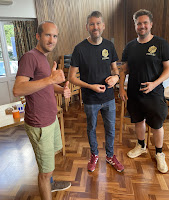 Chris and Matt from MW Puzzles joined us and had kindly bought along a few copies of their wares for both perusal and purchase, so I took the opportunity to pick up a copy of lib-ORB-rate. (I’ve fiddled around with it a bit and pretty much got nowhere yet!)

It was great to meet Fraser of Discord-fame – he of lanky frame in a tiny automobile all the way from Edinburgh. He’d travelled down the night before and needed to head back up the road on Saturday, so didn’t get to spend much time at chez Walker after MPP, and missed out on the traditional fish supper. Hopefully next time he’ll be able to spend some more time with us…

Andrew Coles had come up from the south and gave a couple of us the chance to play with his latest design…which totally baffled me for ages back at my place that evening and several people told me it was excellent, having solved it in a mere fraction of the time that I didn’t.

Around lunchtime we all did the usual decamping to the room next door after finding ourselves some lunch – there were plenty of pig buns this time so Steve and I probably didn’t need to sneak out conspiratorially the way we did… After my pig bun I headed up to the house to check up on the hounds who’d probably only just noticed that the house was empty. Having made sure they were happy, I headed back down the hill for more puzzling, finding everything pretty much as I’d left it down at the hall. 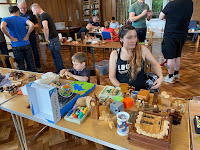 Adin and Sophie brought young Oren and he had a fab time showing a stream of puzzlers his favourite puzzles that he brought along for others to share – the Gravity Mazes and Tangrams appear to be a big hit at about 4 years old in case you’re wondering. Oren is a super-sociable little chappie and he got to do his fair share of playing with others’ puzzles too… and was well-chuffed when Big-Steve gave him a giant Rubik’s cube, setting up what has to be the cutest picture of the day: Oren in his car seat holding the massive cube totally passed out after a day’s puzzling and meeting new puzzlers. The force is strong with this one… 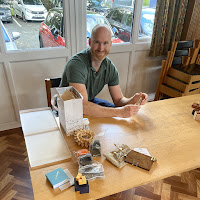 There were a couple of copies of Big Ben in the room - paying homage to their creator no doubt – and several folks spent a while working their way through them… Tamsin did an excellent job of getting through it with pretty much no help and I think she was reasonably proud of herself as a result.

I’d taken along a set of Andrew Crowell’s three-piece TICs and several folks had a go at working their way through them over the course of the day… they make a great set of puzzles, sort of graduated in terms of difficulty and each presenting a very different challenge… Kevin and I ended up spending quite a while chatting as he worked through them, with some (#6) putting up rather more of a fight than others (#4). 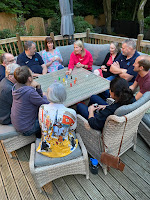 Eric’s Taco Cube was also a big hit- everyone enjoyed the co-ordinated motion in that solution.

Somewhere around 5:30pm we packed everything up and headed back up to the house for some more puzzling, a fish supper and several rounds of Corks – this time with a serious table-full of folks – there was a LOT of raucous laughter during the game while I failed miserably to solve Andrew’s new lock on the side-lines… the next day I discovered that some folks hadn’t necessarily been playing with a full deck, as it were. Everyone had a great time of it though! 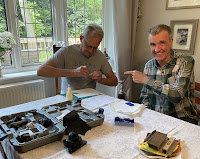 By the end of the evening we had a few puzzles that needed solving and reshelving, but on the whole everyone seemed to manage to stay ahead of the puzzles… there was one small casualty that Brian helped me sort out a day or two later – nothing like making your house guests work for their board!

Everyone headed off at a fairly decent hour (given they pretty much all have really long drives to get home) leaving Frank, Brian and I agreeing that it had been a pretty good day. 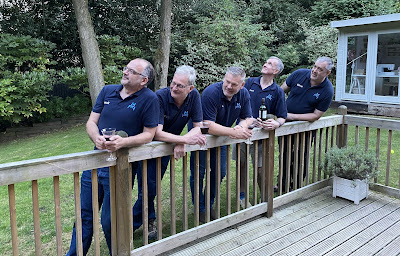