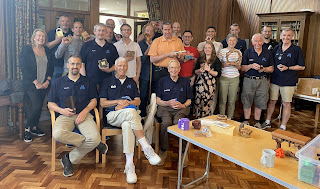 Last weekend represented a massive leap back toward “normal” for me… after two years of virtually no in-person puzzling get-togethers, I finally had a few puzzlers visiting for the weekend and a bunch of them threatening to rock up for our first real-world MPP in the village hall in two and a half years. The stars were aligning once more…

I collected Dick Hess from the station on the Friday morning and we just picked up exactly where we’d left off the last time we’d seen one another – around three years ago… the journey from the station to my place was a quick catch-up on health in the intervening period (pretty good!), vaccinations (Dick won hands-down!), the tennis, and of course puzzles and other interesting diversions.

We had a lovely afternoon of chit-chat and dad jokes. Dick gave me a puzzle lock in the shape of a tortoise from his collection – he’d bought it years ago from a bloke at an Australian market who assured him it had been made in Nepal… it certainly looks the part – Thanks Dick!

He also gave me a set of his Wire Puzzle College Selection – a graded set of his wire puzzles that actually teaches some techniques along the way, generally only to lull you into a false sense of security when you realise that that subtle little variation in one of the later puzzles means that everything you thought you knew is now totally useless and a new approach is required.

While I was (slowly!) working my way through them under Dick’s encouraging eye, I mentioned that I’d been struggling with a Jan Sturm disentanglement that I’d picked up at Wil’s place a few weeks earlier. When I showed it to him, he pointed out that it was an easier version of the final puzzles in his college course… and then promptly solved it in a matter of seconds… pointing out why his version was harder along the way, and in fact the solution to Jan Sturm’s version was not going to be any use whatsoever in solving his…

It took me a few hours but I managed to struggle through the College course with some suitable encouragement from Dick along the way… a major achievement for someone who knows he can’t do disentanglements!

Late afternoon Dick and I headed out to the airport to collect Louis and Wil from their KLM flight. Plenty more catching up in the car on the way home and then pizzas out on the deck at the end of the uncharacteristically warm day. There was a lot more puzzling out on the deck until we decided to call it a night… except for Louis who churned his way through a bunch of things I needed solving… and some he just wanted to have a bash at. 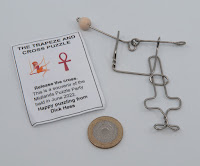 Next morning we polished off breakfast and Dick handed out a gift puzzle he’d put together especially for MPP XLii – noticing there was an intended outcome as a result of one bit being a different shape to that intended, Louis and Dick set up a small production line on the breakfast table to get them suitably adjusted… and no-one was any the wiser (unless of course they read this!). After all that excitement, we headed down to the village hall to get things set up ahead of the arrival of what we hoped would be a whole bunch of puzzlers, some of whom we’d be meeting for the first time in real life!

Shane pulled into the parking lot pretty much as soon as we opened the gate – good to know he was keen! We got the tables and chairs more or less laid out, put up the signs to guide any newbies into the hall and I stocked up on soft drinks and milk for the large quantities of tea and coffee we usually go through at these things…

While all that was going on people were arriving from all over the countryside. Frans and Ethel had to stay at the local Premier Inn due to the Walker’s B&B already having more people staying than we had spare beds (Louis was on an air mattress in the second puzzle cave!). 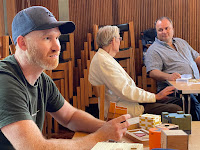 We had fairly-local-Lewis-from-the-discord whose missus had reached out to me on Facebook because he’s allergic. He seemed to fit into the general banter and mild abuse that always seems to permeate these things, so hopefully he’ll be back.

Dan had managed to successfully navigate his way down the road from his AirBnB – getting bonus points for choosing to walk down, even though it was raining! He didn’t look like a drowned rat for that long!

Yaccine managed to navigate the vagaries of air travel and taxis and get himself to the hall direct from France on Saturday morning. RESPECT. Phil managed to join us and meet a bunch of us he’s been chatting to on-line or via email for a while now. James made the trek up from Honiton (his longest journey since the beginning of the pandemic!). I managed to be incredibly rude to Tamsin when I met her for the first time in real life after seeing her on several VMPPs by not recognising her at all…. and then compounded that later on by forgetting to open the gate for her when she was trying to leave that evening. (SORRY!) 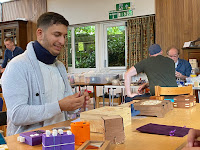 All the old guard were there – Ali’d brought a car-load up from London – great to see Oli and Rich for the first time in ages… and Mike Q had brought some souvenir puzzles for all of us proclaiming he was only here for the fish supper. (True to his word, he stayed for the fish and chips afterwards. :-))

Shane had brought a complete collection of Popplocks and had a steady steam of folks rotating through there all day trying various locks they’d been wanting to solve for ages, all under the expert eye of the master locksmith… it was great to hear the huge buzz in the hall when there was a bunch of happy puzzlers trying to solve their own puzzles while winding up all of those around them. I’ve missed that. 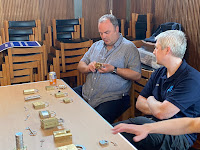 I managed to mis-time the call for lunch and as a result we missed out on pig-rolls from Warwick’s – everyone still managed to find something suitable with several of them opting for some monster kebabs – it must be a tradition or something. Lunch was the usual convivial affair in the side room with banter and puzzle-solving-fuel being taken onboard.

After lunch there was a lot more solving – Mike T’s Xenia Table getting a lot of attention from several folks during the course of the day. One of The Monkeys behaved himself and the other brought much hilarity… actually no that’s not quite fair – they both brought hilarity, just in slightly different ways… but I said I wouldn’t blog about it so I won’t.

Speaking of the Monkeys, they’d brought along a crate-full (literally) of 3D printed give-aways – I helped myself to one of them – a little four-piece cube assembly that I got to play with the following day – and it is brilliant! Steve reckons it’s called “Mrs Butler” – or that might be an answer to another question altogether – either way – it’s worth hunting down and getting yourself a copy – it’s a wonderfully confuzzling little thing – and did I mention there’s only four pieces!?!

James had brought along a bunch of things that needed reassembling and I think that the gang managed to get pretty much all of them back together again… for the most part I watched and provided words of encouragement – that’s my role – that and bring the coffee.

Frank and Jo arrived around the middle of the afternoon having had to make a bit detour on the way down due to a family emergency – Gill, Jo & Ethel then promptly disappeared off to the new café in the village for a catch-up & some cakeee – nom nom nom… and we entertained Frank with the odd puzzle.

Dick managed to catch up with all his old friends during the course of the day, and no doubt made a few new ones along the way – it’s hard not to like Dick. (Don’t!) 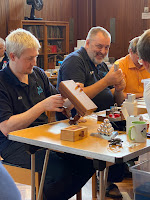 We wound everything up at the hall somewhere before six and pretty much everyone just decamped to chez Walker for more puzzling and some fish and chips. It’s been a while since I’ve had to call in such a big order to the chippy and I suspect that I caught them off guard a little – they delivered in fine form as usual and the fish suppers were excellent!

There was a LOT more puzzling that night before folks began drifting towards homes and hotels… and it was somewhere around that time that we realised that Yaccine wasn’t going to be able to get to Cambridge by train that evening… so we bundled him off to the Premier Inn with Ethel and Frans – I haven’t heard from him since so hopefully he did manage to wend his way off to Cambridge to meet up with Mikael before heading back to France.

Next morning after a spot of breakfast I took Dick to the train station for his trip back to London, only to find that there weren’t any trains running to Euston and there was a bus replacement service running – sorry Dick! At least I do know that he managed to get back to London in time for the meet up with the Millers, fresh off the boat, that evening. 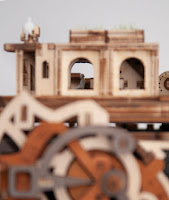 Back at home I pulled out a few more puzzles that Louis needed to play with – including my newly built copy of Architecto – which seemed to perform reasonably as a puzzle – it’s hard to judge when you’ve built the thing and know how all the mechanisms work and interact. I also managed to spend a little more time playing with a couple of the goodies that I’d acquired from Phil (got nowhere!), Wil (made some progress but not a lot!) and Steve (solved – but wow, she’s a great puzzle!).

After lunch I dropped Wil and Louis at the airport in plenty (probably too much!) time given all the horror stories about queues for security checks and the like… in the end I think the lads probably had a bit too much time to kill there, but I wouldn’t have forgiven myself if they’d missed their flight!

…all of which left me somewhat wiped out, but really happy having spent several days with good friends, lots of puzzles and plenty of great chat – it was, as they say, another grand weekend – thank you all!