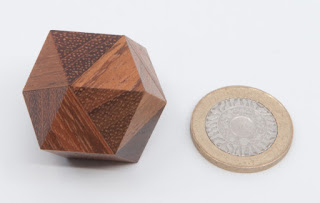 Sometimes the simplest things are sent to catch you out… and when they do, you should probably keep that to yourself. You definitely shouldn’t tell your puzzling mates about how much of an eedjit you are – and you probably shouldn’t write it up on your own blog – that’s just asking for scorn, shame and laughter at your own expense.

I recently acquired a little Pennyhedron to add to my modest Krasnow collection. The seller’s description mentioned that the fit was pretty snug and it would be shipped assembled. It arrived in the expected condition and it looked lovely… a perfectly petite puzzle.

Knowing that it was a three-finger Pennyhedron (other Pennyhedrons may exist) I set about trying to open it… trying this way and that, changing axis every now and then, first pulling and then pushing, adjusting my grip a little, then pulling a bit harder, repeating the entire process and then trying pushing even harder – all with not a lot of success.

I repeated this process across the course of several evenings, always with the exact same result: singular piece of Pennyhedron stares mockingly back at me.

I begin to wonder if I’m going to need to resort to Chinny’s final solution for Pennyhedra – the large mallet. 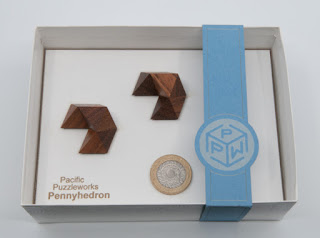 So I feel a bit of an eedjit, but I decide I should take it along to MPP the next morning and hope some others will fall into the same trap as I have.

I try it out on Oli who calmly assumes the correct two-fingered salute, flukes the orientation and simply slides it open…

It’s just me then.


But it’s a beautifully made example from Lee so I’ll get over my embarrassment one of these days.

Barely a year goes by when there isn’t an excellent new design from Laszlo Molnar – 2019 was no exception: he gave us Hat Trick.

I enjoyed playing with this one in the Design Competition so I was quite chuffed when Brian Menold had some copies up for sale… they didn’t last long, but the good news is that Brian is planning another batch and you can currently reserve a copy on his website.

The premise here is straight-forward: you have six L-shaped pieces, one box with a T-shaped hole and just enough space inside the box to allow those pieces to rest easy… put the pieces in the box. 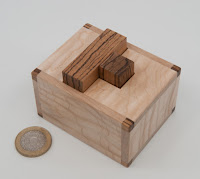 Of course to get in there, they need to go in through that T-shaped hole in the top of the box… a hole that helpfully shows you exactly how the final piece need inserting – great! That means you only nee to work out how to get five of those little pieces in there – this just gets easier and easier!

It’s not hard to visualise the shape you’re trying to get to inside the box – getting to that will require some strategy, and perhaps a little Think (c).


This puzzle really rewards thought and planning. Helpfully (yes really, this time!) the box is snug so you won’t be tempted into trying adventurous rotations and the like.

I really like this one and reckon it’s one of Laszlo’s best so far… so hit Brian up (soon) if you want a copy.

If you don’t want to take my word for it, Ken (with a Z) is also a big fan, as is Kevin – see what they had to say about it in those links.
Posted by allard at 20:53 No comments: 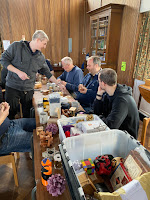 This one started with a  bit of a bump: Louis and I arrived at the hall nice and early to set up and found a couple of ladies already set up in the smaller room for a nice day’s painting… turns out the hall had been double-booked for the day – not quite the start we’d hoped for, but we quickly decided that there was more than enough space for us all and apologised in advance for the raucous laughter that would in all likelihood be coming from the hall.
Tables were duly laid out, soft drinks stocked up and caffeine readied for the arrival of puzzlers from around the countryside. 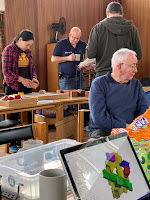 Oli and Rich rolled in and Oli duly set out a huge crate of treasure available for sale – several people helped themselves to various bits and pieces during the course of the day although the crate still looked pretty full at the end of the day… I suspect it had just been better packed when it arrived in the morning.
Big-Steve and Ali arrived with a cab-full of puzzles for people to play with. (And some Brass Monkey stock just in case anyone needed some metal puzzles.) 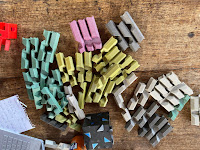 Wee-Steve unpacked several tables-full of giant puzzles he’d recently made up for a company team-building exercise, all themed with explosives or ammunition which presumably makes a lot more sense in the context of his company than in a Quaker Meeting House. Several puzzlers had a go at his giant Melting / Stumbling / Lox / etc. variants during the course of the day. They were all beautifully made and nicely encased in wonderfully decorative boxes – he’s clearly been a very busy lad recently!
Chris and Phil arrived sometime after lunch – yes, pig rolls! – and they duly blitzed through several puzzles as usual. 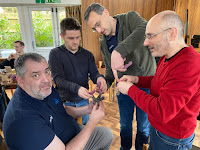 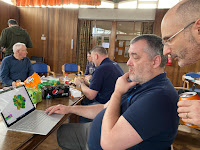 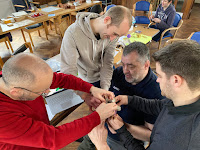 Ali and Big-Steve had printed a huge set of hexagonal notched sticks to explore the 740-odd potential assemblies. Steve’s laptop had all the potential solutions animated and he was keen to try a couple of the more “interesting” assemblies. 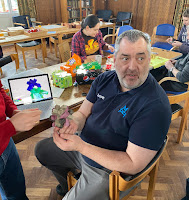 One particular assembly has a couple of sub-assemblies at each end and a set of pieces in the middle – all of which needed to be introduced to one another simultaneously… a process that started with two of them, then added a Louis, and then a Kevin, a Chris and an Andrew - and resulted in a fantastic spectacle of co-ordinated motion – or at least it would have been if you could have actually seen what the heck was going on in the centre of that little huddle. Somehow the fabled assembly did actually emerge successfully – AND IT HELD TOGETHER – something that wasn’t entirely certain all the way through the process.
The lads had also brought along some new BM-ish experiments and a few of us got to play around with an interesting 2-3-4 assembly which will hopefully (selfishly!) turn into an actual thing at some point in the next 6 months. I managed the simpler assembly… Rich toddled through the more complicated 3-4-6 one leaving most of us feeling a trifle inept. 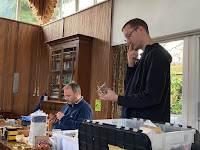 Oli spent quite a while in suspended animation pondering an assembled Nova Plexus for some reason. 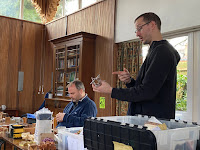 Mike Q was attending his first MPP after making the trek down from oop north. I’d taken along a bunch of packing puzzles he’d been asking about on the Discord and he duly worked his way through them… and judging by his comments on the forum the next day, he really enjoyed the A-Ha! moment on the 4P Packing puzzle. He breezed through them with a lot more finesse than most of us could muster.
Mike had brought along a bunch of interesting goodies for us try our hands at too, including a set of 3D printed balancing eggs from one of the guys on the Discord called CoreMods – I saw Ali work his way through most of them and judging by the way he was pointedly showing Big-Steve as he solved each of them, I suspect that Steve had had slightly less success on them… loved the fact that the set is shipped in an actual egg-carton. 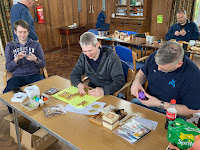 Shane was on top form as usual, dispensing all manner of helpful advice and words of encouragement in his own unique style – which generally had most of us within earshot hosing ourselves with laughter. He’d brought a bunch of puzzle locks along and I enjoyed working my way through a few of them – I always enjoy getting caught out by some of the simpler tricks on old, almost agricultural-looking puzzle locks – it’s good to be kept humble – and boy did they do that!
At some point later on in the afternoon Andrew brought out a project he’d been working on and wanted some thoughts on – it turned out to be a puzzle lock so Shane and a couple of the lads duly took themselves off to what had been a quiet corner of the hall and proceeded to work their way through opening said puzzle lock… at which point a seriously enthusiastic conversation began with Andrew about manufacturing of said puzzle – a pretty positive signal you’d have thought.

After they’d all finished it was passed on to me and I duly put myself down in a quiet part of the hall when I realised something interesting while playing with it among a bunch of puzzlers. There’s a glorious little “A-Ha!” that makes you realise this is going to be very interesting right up front… and it doesn’t disappoint.  Opening it is a lovely little experience, and resetting it is also interesting… my words to Andrew immediately afterwards: “This lock must be manufactured and sold”, followed shortly by offers of cash immediately… selfishly, I’m hoping he manages to find a way to get them made.
Somewhere after 5:30 we tidied the place up and packed up the cars before most of us headed back up to Puzzling Times Central for the traditional fish supper, and puzzles.
Ali and Big-Steve sponsored the dinner – THANKS LADS! And provided some puzzles… or rather, people helped themselves and enjoyed the stuff lying around – ‘cos that’s what they’re there for! 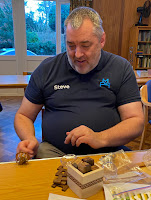 Amy worked her way through Slammed Car, with the odd puzzler passing a helpful jibe every now and then, mainly at the tail end of things. At one point she arrived in the puzzle cave asking if she could solve Brian’s Mount Fuji – and it turned out that with some suitable encouragement, she could ... and then there followed the inevitable compare and contrast with James’ Dot Box and the solution technique that they share – and no, we still don’t have a cogent scientific explanation for why it works.
Somewhere around 10pm the well-travelled ones decided they should hit the road again and headed home.
Another fine MPP duly notched up – our first post-Brexit MPP (PBMPPi anyone?) – although we noted a brief improvement (presumably unrelated) to the value of Sterling (Yay, slightly cheaper puzzles!) nothing else has really changed… and importantly, they allowed Louis to get home after the momentous(?!) event.
Posted by allard at 12:49 2 comments: