If Fermat was my favourite from the latest Pelikan release, then Play-Boy 2 from Alexander Magyarics runs a pretty close second.

I really enjoy Osanori Yamamoto’s apparent cube puzzles - just how creative he’s managed to be with a simple box with some heavy restrictions on entry and a few pieces really blows my mind.

Play-Boy 2 is a wonderful riff on that theme from Alexander – not content with just coming up with a restricted entry box, he’s also taken the liberty of squashing the box from one corner to the other, resulting in some wonderfully delicious geometry that forces things to be handed… which is both really helpful and really unhelpful at the same time.

It’s also great for really messing with your Euclidean headspace! 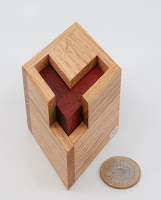 Given the really limiting entry-ways, you can derive some things right off the bat… which is always a nice way to start a puzzle solve. Armed with that it isn’t too difficult to come up with an assembly or two outside of the box – and from there you just need a little imagination to think through how those pieces need to dance around one another in order to get them in or out of the little box…

What makes me really like this design is that there are several features that work together to guide the solver toward the solution, as long as they take the time to Think (c) a little along the way.  (Either that or I got really lucky – but I’m going to blame it on good design!)

It's not super-tough, but it’s a fun solve and it really looks terrific on the shelf – a real stand-out from the Pelikan-folks - and they still have some available for sale over here. (You're welcome!) 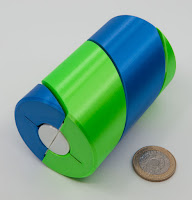 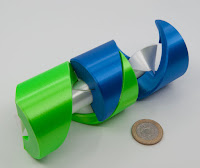 Enter if you can… 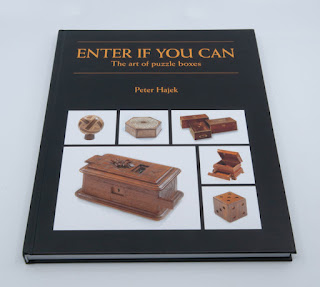 Peter Hajek’s new book, “Enter if you can – The art of puzzle boxes” will be available for sale at both Pelikan (already!) and Cubic Dissection (shortly…).

I was fortunate to be given an advance copy of this lovely book and I highly recommend it to anyone who loves puzzles – and especially those who love puzzle boxes. Peter has produced a beautiful coffee table book full of stunning photographs of hundreds of puzzle boxes (including some thoroughly unobtainable ones!).

The book takes the reader on a journey through the development of puzzle boxes over the years and then spends several chapters looking at some of the recent masters of the art. Peter’s gone to great lengths to try and entice new puzzlers into his love for puzzle boxes, and I’m sure he’s going to win lots of new converts with this lovely book.

So if you’re interested in the history of Sorrento boxes or looking to find out more about Frank Chambers’ puzzles, looking for a discourse on difficulty or what makes a good puzzle (box), Enter if you can has you covered.

Thank you Peter for putting it all together so beautifully and creating a record of some of the things that really amuse us puzzle box lovers.

When Volker reached out to me a little while back to ask me to have a look at some blurb he’d written for a new puzzle he’d designed, my interest was piqued. It was called Fermat and the blurb described a lengthy design process that resulted in a single solution for putting three innocuous-looking triangular pieces inside a slightly lipped box.

The box will be familiar to anyone who’s played with any of the Euklid series (and a few others) – there’s just enough of a lip that you can’t ignore it, but it hardly seems to block off any of the entrance at all – until, that is, you start to try and place pieces inside the box.

Several weeks later the good folks at Pelikan announced that Fermat was ready for sale so I loaded up the virtual shopping cart and checked out – I ended up buying quite a few things from that release, and Fermat is definitely a firm favourite.

There are indeed three slightly differently sized triangular wooden blocks to be placed inside the box, below the lip. Each of the pieces will readily slide in and out and once inside they can all be manoeuvred around… in fact putting two in simultaneously isn’t all that complicated either – however, putting three of them in at the same time is impossible. (I’ll just tell you that now to save you all the bother.)

I spent an inordinate amount of time working out how best to move things around inside the box and I’d pretty much decided how the pieces need to be in there for the last piece to be inserted (my go-to strategy for these sorts of puzzle). I found a lot of ways to do stuff, just not the right stuff.

At one point I did what I suspect is a bit of a right of passage for this puzzle: I encouraged two blocks to slide past one another with the teeniest amount of pressure and then had a real heart-hits-the-table-kind-of-moment when I realised that I couldn’t get in underneath those pieces to push it back with the same teeny-tiny amount of pressure. For the next few days I tried variations on variations for getting the pieces properly aligned and getting one to slide past the other – all with zero success… I let some of my puzzling mates know that I’d done something a little silly and they mustered all their sympathy and duly laughed uproariously at me. (Thanks chaps!)

I applied a little thought to the subject and came up with a handy way of getting myself out of my little predicament and thankfully that worked a treat – but learn from my silly mistake folks: literally NO FORCE should be applied – seriously.

Newly invigorated by all my mates solving it and telling me how much they liked it, I set at it again, being a lot more circumspect this time… I spent a while exploring the same blind alleyways I’d tried over the past week or two and then changed my perspective entirely… and that proved to be the right thing to do – I broke it down into a set of smaller problems and solved those in turn and then bundled the whole thing up into one big solution – and I think it’s great…

Unless Nick says otherwise, I think Volker has successfully designed out all of the other solutions and forced the solver to replicate the exact set of manoeuvres he set out to build into the solution.

This is definitely one of those puzzles that suckers you in thinking “How hard can it be” and then shows you exactly how hard!

I love a bit of machined brass… especially the puzzling variety – so when I spotted a couple of pics from Radek on Facebook of a new chunky little brass caged hedgehog, I reached out to ask him if there might be any available for sale. His post mentioned he’d only made about 10 copies and two of them were already somewhat spoken-for – with one to them being rather permanently attached to a custom Harley Davidson – I didn’t rate my chances of snagging a copy particularly highly, but reckoned it was worth a shout and thanks to the marvels of an international courier, a couple of days later I had a copy in my grubby paws.

This puzzle comes in a neat plastic sleeve that holds some additional meta-puzzling and a leather bag that keeps the cage and hedgehog snug inside. Open it all up and you have a handsome hunk of brass machined into a chunky cage with a nice spikey hedgehog nestling inside.

As usual you need to release the hedgehog – and this one’s a classic design – nothing super-funky like some of Radek’s other takes on the genre – some of which might look like a standard hedgehog in a cage, but they are anything but! A little sleuthing and a little fiddling about will soon enough release the little spikey fella, and normally at this point you’d be done, except Radek has added an extra little mystery or two in the form of a challenge card and map… which asks you to find the new home of the puzzle’s real secret.

This bit of the challenge will test your observations skills and your puzzling nous but when you bring everything together it’s all right there in front of your eyes, as clear as day… and of course that leads you to some wonderful extra material that I particularly enjoyed. (I really loved the little nod to the other mythology around this puzzle.) 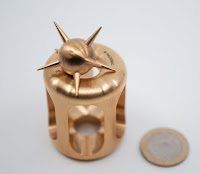 Even if it’s “just a standard hedgehog puzzle” – I rather like this copy – the cage is machined from a single lump of brass and the back-story in the extra challenge is lovely bonus.