This one was extra large in some senses, and small and intimate in others… but it was still a whole lotta fun, or rather, that was the majority view…

The motorways were rammed so it turned out to be a good thing that Stefan’s flight from Munich and Rob’s flight from Amsterdam had been delayed just a little bit - the universe smiled on me and they were both delayed by virtually exactly the same duration and ended up walking out into the arrivals hall within three minutes of one another – I like it when arriving puzzlers are that co-ordinated! Heading home the motorways were even more jammed so we ended up taking the round-about-hardly-scenic route to Barnt Green.

We assigned the boys their rooms and Stefan was allowed an actual bed for the first time – well, for the first time while he was visiting us – I’m sure he has a bed at home… Gill laid on a scrumptious meal and a grand dessert before the puzzling began in earnest.

Nick put in a brief showing and had some success on an early Strijbos Cola bottle that he’d been meaning to try. (Other Nick’s may be available.) I spent some more time unsuccessfully trying to solve a number of things I’ve been working on recently while Rob and Stefan skipped through a bunch of things they hadn’t tried before, including a number I’d been trying unsuccessfully to solve for absolute ages.

Next morning we opened up the hall and set out the tables, and got the tea and coffee station up and running…. with plenty of biccies – puzzle-solving fuel!

Dale was first to arrive, bringing along a crate full of puzzling goodness for anyone to help themselves to…. Steve, Rich and Oli rolled in soon after and they proceeded to unload a serious pile of puzzles: Steve had brought along a number of seriously extra-large puzzles in keeping with the theme – I don’t think I’ve ever seen a ball that big! Rich went in a slightly different direction and brought along three large boxes of puzzle pieces, disassembled and already mixed across the three boxes – we know this because Steve offered to "help" him by scrambling the pieces among the different boxes only for Rich to tell him not to bother as he’d already taken care of that. 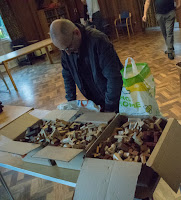 Kevin arrived looking somewhat shattered after the drive down and presented Steve with a bag full of Happiness – or rather pieces of Happiness – left over from his last visit where they’d oscillated between being assembled, and not, as we took Kevin on a bit of a rollercoaster ride – they ended that day disassembled, a state that appears to have pervaded until now…

Steve seemed to know exactly what to do and immediately ran over to Rich’s boxes of bits and distributed all this Happiness among the three boxes more or less evenly. (I may have been encouraging him and waving around a twenty-pound note… safe in the knowledge that the Happiness pieces are reasonably distinctive and Rich’s bits of Happiness were in a separate bag at the time – I’m not a total bastard!)

Kevin didn’t immediately see the humour in all of this. In fact it’s probably fair to say that crest-fallen would be a reasonable description – he seemed to be in a pretty dark place – so Steve lightened the mood by mixing up the pieces in the boxes so the Happiness wasn’t just lying on the top. Kevin took himself off for a cup of something warm and something chocolatey.

Normal service resumed: we sat around and puzzled a bit. Occasionally someone would say something to Kevin and he’d give a muted response – glancing across at the boxes of un-Happiness every now and then and muttering something about shoes – it sounded a bit like “-soles”.

I collected Ed from the station and he began fondling and solving puzzles we thought he might enjoy, or not. Some wag gave him a copy of Tower of London – something I’ve been struggling with for ages… suffice it to say that Ed solves puzzles way better and faster than me and he was soon demonstrating to all around that he’d solved it, before resetting it again for the next victim.

Steve and I had both brought along our massive disentanglements that he’d procured from Japan, keen to see whether we could make one really big disentanglement… luckily for us we had an entanglemaster in our presence – and he was just about talking to us – so we challenged him to make a long chain – he did that easily! And then we wondered out loud if it might be possible to make a chain – something that would probably have been a lot easier if Ali hadn’t been in Cyprus and had brought his copy along too. Turns out Kevin made that look pretty simple too so we gave Steve a bit of a workout by asking him to pose in various positions with 12kg of disentanglement. (For some reason it took ages to get the camera properly focused.)

We tried to goad Ed into having two kebabs on the grounds that it was after all XL day – he didn’t fall for it, but did justice to his usual single kebab… some of us stuck to the usual pig rolls – others were tempted to try the kebabs and wraps from Peter’s Pan. Nobody was disappointed with their choices.

After lunch someone pointed out that Steve’s big ball was now rattling – something it hadn’t been doing earlier that day… further inspection showed that some of Kevin’s Happiness had transmogrified into Steve’s big ball… Kevin muttered and set about removing several pieces of said ball to retrieve his lost Happiness. [Hey! That works on so many levels!] Having retrieved his Happiness (sadly only literally, not figuratively) he kindly reassembled Steve’s big ball. Steve brought along the medium-sized Nova Plexus and we were pretty keen to assemble it, having seen how easy Ali made it seem on Rob’s dining room table a couple of weeks earlier. Out came the massive rubber bands, the hammer and a set of three-times-normal-scale Nova Plexus bits. Several people had a bash – quite literally – at assembling it – most of us coming reasonably close, but never quite able to get the last one or two joints to line up properly… at one point Steve and I managed to come close enough to remove all the bands and still have it hold together – and we were moderately proud ourselves – at least until Kevin took a hammer to it and reproduced the start position with some loud clanging – apparently he hadn’t quite forgiven us, yet.

At some point in the afternoon Rich and Chris sat themselves down among much Happiness and reduced it to a mere handful of Happiness Cubes, which Kevin literally pounced upon and secreted away to avoid a repeat of the previous two occasions when they’d been rapidly disassembled again at this stage in the process. I’d like to think that he ended up going home with less Happiness than he arrived with, but he may disagree.

Amy stormed through a huge number of puzzles and seemed pretty happy to take on just about any sort of challenge the guys could throw at her, including some well-dodgy banter that probably managed to stay just about on the right side of harassment.

Adin and Oren popped in for a few hours in the afternoon – successfully bringing out Steve’s inner kid and giving him a better-than-usual excuse for rolling around on the floor, much to Steve’s Oren’s delight.

John had brought along a lovely little selection of antique puzzles and he entertained folks with stories of puzzles getting in the way of the real business in the family store and cluttering up the storeroom.

As per my usual strategy, I took along a couple of puzzles I’d been struggling with and sure enough, I manged to con someone into solving it for me. In my defence, it took Rich quite a long time to solve my copy of BioTIC… I’d been struggling with it for weeks and it took him at least half an hour to show me just how rubbish I am at solving these damn TICs! 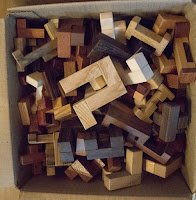 I think Kevin left almost as happy as he was when he first arrived – although there may have been a noticeable dip somewhere in between. John and Dale opted to head home before the darkness set in and then somewhere around five thirty the rest of us packed up and headed to chez Walker for fish suppers and more puzzles.

[At this point I’d managed to avoid any news of the Rugby World Cup Final, but when I was paying Shawn for the hall, the rugby-mad Irishman couldn’t help himself from saying how well my boys had played and how chuffed I must be with the result… I watched the recorded game on the Sunday afternoon and he was right. Turns out that deep down I’m still a Springbok supporter at heart.]

The fish and chips go down well and the puzzling gets serious. [Lovely little aside for you here: I'm collecting the fish suppers at Peter's and the proprietor asks me where Ali is? - Ali has clearly made a huge impression at my chippie!] 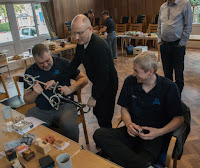 When I take Ed to the station, I leave him in the care of a number of young folks dressed for some serious partying – they promise to get him off the train in Birmingham for his connection – I’m sure they did.

Apropos of absolutely nothing, has anyone heard from Ed recently?

Back at the house, Stefan and Amy have graduated to the serious stuff: Stefan is probing Katie and Amy is in search of Wil’s Angel’s heart. At one point I’m in the box room when Amy comes in to borrow an endoscopic surgical instrument … earlier someone had asked if I had a really strong magnet so they could help Stefan who’d done something he probably shouldn’t have to Katie.

Later that evening a shot of Amy with a partially disassembled Angel Box makes it onto social media, along with a large pair of pliers and said endoscopic instrument in the foreground – she’s smiling at least… and I think the box ended up properly back together again. Katie managed to withhold her secrets… and it’s probably fair to say that the SMS Box thoroughly defeated Rich. (Is that a first?) 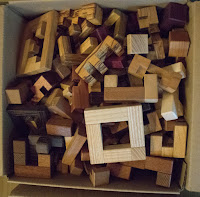 At some point Amy decided she wanted a go on a Hokey Cokey Lock. After a good while of trying all she could think of, we encouraged her to go through the dance because that would make everything clear – helpfully Steve was free at the time – so the entrance hall became dance hall and the interweb was duly blessed with footage of Amy and Steve dancing the Hokey Cokey, much to my hounds’ amusement.

Everyone left at a vaguely sensible hour and the locals crashed almost immediately thereafter. 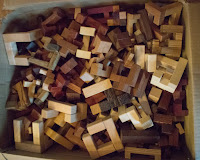 A few hours more puzzling in the morning, interrupted by a smashing bacon and cheese croissant brekkie before I took the lads back to the airport for their flights to AMS and MUC en route to SOF. That afternoon I settled down on the couch to watch SA take the world cup from my current country. The roots are still strong.

It may have been smaller than usual, some of the usual crowd might not have been there, but the banter and giggles were definitely extra-large.

Yeah, it’s probably worth doing it all again sometime in the future.