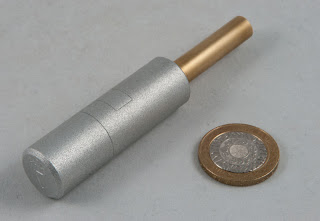 I was delighted a little while back when an opportunity to acquire a copy of Roger’s Eis puzzle fell into my lap. I’d first read about it on Rob Stegmann’s website – notably the fairly recent story of how this puzzle has remained unsolved in his collection for ages, until a friend miraculously opened it – and how even after studying it opened, he still struggled to repeat the solution back at home. Suffice it to say that this story filled me with no small amount of respect for this puzzle, and a fair amount of trepidation when I started playing with it.
The puzzle looks like a kids’ ice lolly – hence the name – with a brass stick protruding out of the end of an aluminium lolly. Close examination of the lolly bit shows that it’s made up of two parts that overlap and join in the centre. The brass stick bit can be rotated and sometimes pushed in and out of the lolly bit… and when it’s quite far out, the two bits of the lolly feel a little looser – suggesting that you’re trying to disassemble the puzzle.
I took my copy of Eis along to our last Midlands Puzzle Party and a few folks had an unsuccessful bash at solving it … and it was one of the Rogers being played with at James D’s Easter Saturday Puzzle Party down in Devon. At one point Oli was fiddling around with it and all of a sudden a flash of inspiration flew across his face and he said “this thing’s a Revomaze!” – and sadly that actually meant quite a lot to a few of us. He described something that he was feeling in the movements in Revo-speak and it made sense (walls, paths, traps and resets anyone?), and a couple of minutes later he had the thing open in bits on the table! [He was on a bit of a roll that day – and that wasn’t the only tough Roger puzzle he solved that afternoon!] Simply amazing … 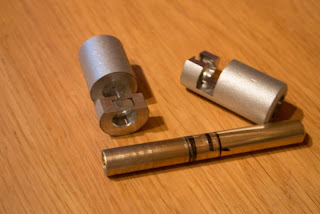 I had a look at the bits and thought I’d recognised some of those Revo-like features (remember this puzzle pre-dates Revomazes by at least a decade!) before Oli reassembled it only for it to remain closed for the rest of the day.
Back at home I had a quick fiddle with my copy again and got absolutely nowhere before setting it aside until last Sunday, when I decided that I should approach it like it was a Revomaze, and try some rudimentary mapping of what was going on inside there … so armed with my trusty Sharpie pen, I started sketching out some paths on the brass shaft (it’s a Revo-puzzle now, not an ice lolly!) and soon enough found that I could explore some new areas and go where my little map suggested I shouldn’t be able to … which got me to the point where I could pull the shaft right out and open the two aluminium parts – job done!
Examining the innards of this puzzle has given me a huge amount of respect for Roger’s eye for engineering design. He’s used several elegantly simple ideas in a very restricted space to make a rather interesting little maze – one that you cannot navigate by luck. The symmetry in the pieces is beguiling and in fact a careful analysis of the outside of the puzzle will actually help you understand the insides – although you may not realise that until it’s too late! 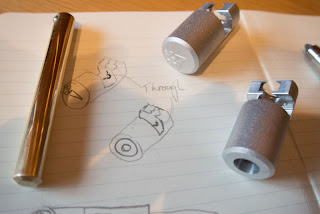 The implementation of the “springy bits” is one of the most sublimely elegant solutions imaginable … except I wouldn’t have imagined it in a million years! … and the kicker – you could show someone a picture of the bits and they will still struggle to open this puzzle – witness the fact that Rob has a picture of the bits on his website, I looked at them when Oli opened it and it still defeated me until I took out my trusty Sharpie pen – well that’s my story, and I’m sticking to it!
Posted by allard at 18:05