I’ve been a fan of Rainer Popp’s Tricklocks for a while now, so the initial rumours of a new puzzle were cause for a little celebration. Enthusiastic comments from someone who’s seen a prototype adds to the anticipation. Speculation on a possible release date seems to be settling down to coincide with a Lock Collectors’ meeting and then someone spots an update on Rainer’s website with pictures of the impending T8, and it looks absolutely FAB! 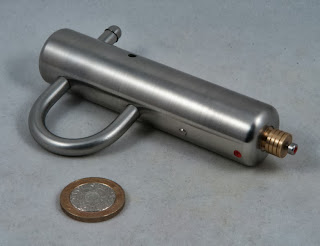 It’s an unusual shape, looking like a lowercase “d” and in a bit of a departure from his usual materials, this puzzle is mainly stainless steel. The pictures didn’t really tell you much – there appeared to be a couple of small buttons on the main shaft and something sticking out of the end of the shaft that looked “interesting” (read: probably worth exploring when you get your paws on one!).

Knowing that Wil Strijbos would have some in stock, I’d asked him to reserve one for me and let me know when they were available, so I was quite surprised and rather delighted, when one appeared on my breakfast table shortly after MPP12. [Don’t ask, I won’t tell!]

The T8 is a proper, heavy lock – there is no chance of jimmying it or opening it any other way than the one that Rainer intended. In common with the T3 – my favourite Tricklock, this lock too has no key and is totally self-contained. The shiny stainless steel shackle protrudes through the main shaft on the one side and locks securely into the shaft at the other side. Rainer’s customary logo along with the locks ‘T8’ designation appear on the one end of the shaft and the other end has an interesting little brass knob protruding from the end of the steel shaft – which in turn has a small sprung button poking out of the end of it. 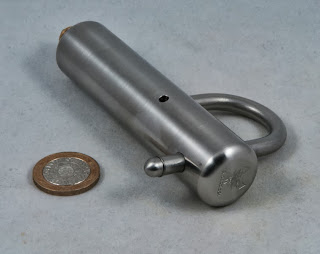 After dispensing with my croissants and orange juice, I begin to fiddle around with it, finding one or two interesting little things to do, and then nothing … at which point Louis mentions that it took him a while to solve his copy and all hope of solving it any time soon evaporates!

I spend a while fiddling around and I’m pretty certain that I understand the first few steps thoroughly, but cannot for the life of me see where to go next…

I put it aside for a while and switch to something else while I wait for inspiration to strike … it’s a lonely wait!

I end up spending a couple of hours getting nowhere spread over a couple of days. My theories and experiments become more and more obtuse until I’m experimenting trying some theories that would be totally out of place on a quality puzzle such as this one – but I’m running out of ideas…

Eventually I spot something unusual happening while I’m idly fiddling with it and that leads me onto an entirely new avenue of discovery – and I have it open for the first time in two days… but even when it’s open, it doesn’t give you any further clues to the locking mechanism – in fact it’s the lack of clues that provides a clue… ! 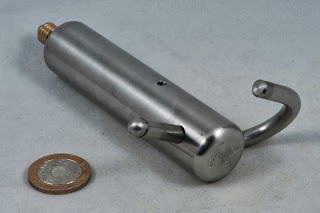 A few more minutes of experimentation and I’ve worked out how to lock and unlock it efficiently – and it’s an excellent puzzle. The mechanism isn’t widely used and is so well disguised that it should take you a while to recognise the signs and work out how to get around it … an excellent addition to Rainer’s series of puzzle locks.

As I’m writing this I suspect that Rainer is sold out but that there may still be a few of them available for sale at Grand-Illusions …  I don’t think they’ll last long though….
Posted by allard at 08:59