I’m lucky enough to know same rather well-connected puzzlers and every now and then one of them will get in touch and ask if I’m interested in a such-and-such or whether I already have a so-and-so. Recently I had the opportunity to get my hands on a beautiful puzzle box made by the indecently talented Kagen Sound (nee Schaefer) - Waterfall Box #5. 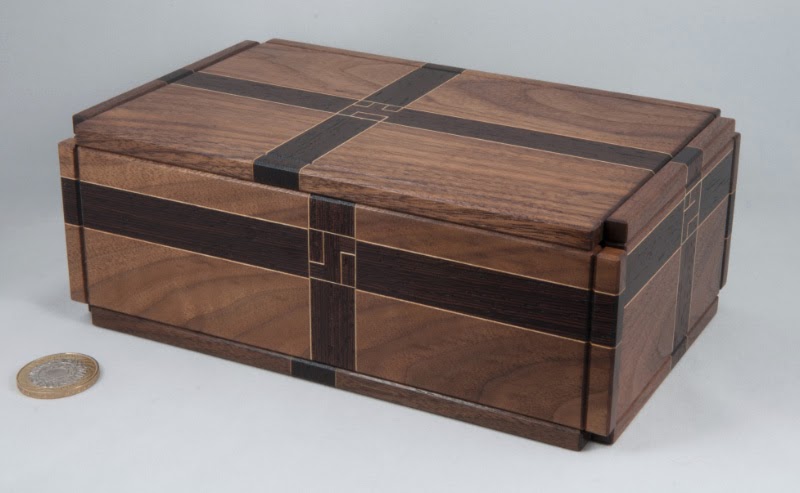 Kagen produced these in around 2006 and as you might guess from the name, it was the fifth in a series. The series share a common size and style with a dark (wenge) band tracing around the sides of each box. Each successive box in the series took more moves to open (7, 15, 19 and then 42) with the final box in the series requiring the sum of all these, 83 moves, to open. Each of the earlier boxes in the series had a contiguous dark band which effectively lead the solver around the box toward the solution… however Waterfall Box #5 has some rather unruly wenge lines that don’t line up…

It turns out that if you packed the first four boxes in a two by two by one arrangement, it would give you a continuous dark line around the resulting block which turns out to be the “map” for the solution to Box #5. (I’m going on faith here since I haven’t seen Boxes 1-4 in the flesh.) and furthermore, when Box #5 is ready to be opened, all of the dark lines on it will be aligned… so you know at a high level “which direction” you’re heading in, although if you think about the fact that you have 83 moves to open this box and only 6 panels, it’s clear that at some point you’re probably going to be back-tracking.


To help you out even further, the central decoration on each side is in fact a little map of the 3*3 maze inside that side panel. Now with all that help, how hard can it be to open this box…?


Pretty hard, it turns out!


When my copy arrived, it was still in Kagen’s original cellophane wrapping with the certificate sealed inside, looking like it literally had never been unwrapped, let alone opened. Feeling half-privileged at being the first person to play with this copy and half-saddened that it had been packed away unopened and not played with for all these years, I didn’t waste any time getting rid of the cellophane and began playing with the box. 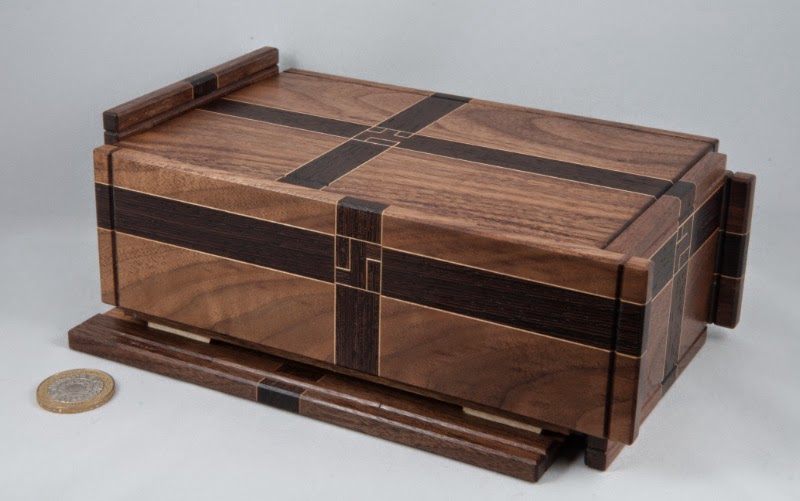 There’s one obvious side to start on (mainly because you can’t move any of the other sides at all!) when I started out moving the panel, first this way and then that, it was reasonably stiff. It loosened up with a bit of exercising and once I’d progressed to working on the subsequent panels, the first one was beginning to work rather smoothly.


Getting one panel properly placed frees up the next panel and so on, until you find yourself needing to backtrack in order to get some of your earlier moves undone to allow the test panel to develop further. I found myself thinking about the progress on two levels – trying to work out where I wanted to go at a high level, and then working out how to get things properly aligned a a lower level to allow me to do that.


You’ll find a bunch of forks in the road, as it were, and if you don’t think far enough ahead, you’ll risk having to either re-do quite a lot of your work or find yourself right back at the start again.


Having spent a while playing around with it and working forwards and backwards through the full solution, it’s freed up quite a lot – although the movements are beautifully precise and it will only let you do what you’re supposed to be able to do…


Several folks had a bash on it at Rox’s big BBQ and also subsequently at MPP15 – I don’t remember seeing anyone open it, but they all seemed to be enjoying [p]laying with it… even the blogger in denial about being a secret puzzle-box-fancier! 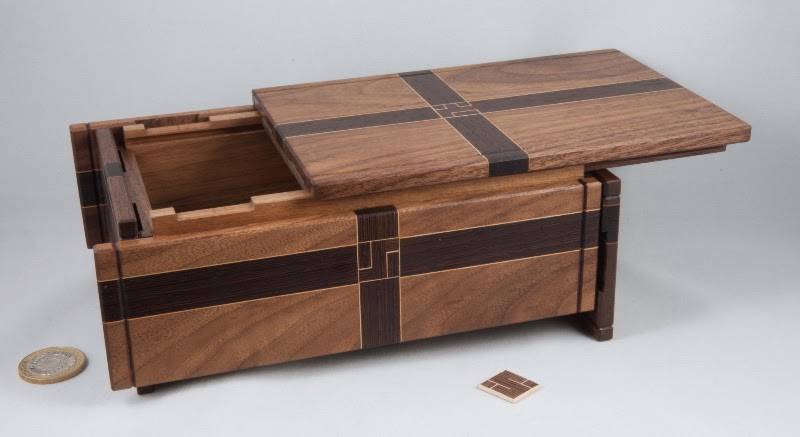 There was one thing that had me a bit concerned – when I was opening it the very first time when the panels were still fairly stiff, I was worried about the sounds coming from inside whenever I turned the box over – it sounded like something metal had let go and was sloshing around inside… I hung in there and when I finally opened the box all became clear: Kagen had placed a “spare” inlaid map piece inside the box as a piece of treasure to reward the solver. Nice touch! That tiny piece of inlaid wood sounds for all the world like something small and metallic inside the box as you turn it over…


Very chuffed to have been able to get hold of this box and rather enjoy the fact that in the last couple of weeks it’s been played with more than in the first eight years of its life… to misquote Ishino: “puzzles should be played!”
Posted by allard at 07:43