Once or twice in the past I’ve mentioned that I like finding puzzles that look ostensibly alike, but are really totally different puzzles… in fact I’ve even written about a pair of puzzles that look identical from Lee Krasnow over here – so imagine my delight when I stumble across a few more variants to add to the Krasnow bit of the collection. 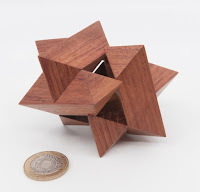 First up is the plainest looking of the trio – it is the standard Coffin Star design (SC-04), aka the diagonal burr. The fit on this little sucker is just so darn good that the usual trick of tugging on adjacent pieces does absolutely nothing… spinning it – likewise… until you pay this innocuous looking beastie due respect and adopt the correct grip and pull it apart on the correct axis, it will simply stand there and mock you. 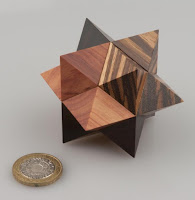 Next up looks ostensibly the same again, except it’s made in far prettier woods this time… and unusually for Lee’s work, the pieces feel a bit loose when you pick it up… and that gives you a bit of a clue to what’s happening inside – take this one apart and you find it has a cubic cavity in the centre – this is Coffin’s Star variant 4B(?). Having had that central little bit of the puzzle removed means there’s a lot less wood to grip between the pieces when it’s assembled, giving it the slightly loose feel, but when it comes to reassembling this guy you really miss those central pieces! 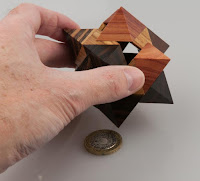 If you’re anything like me you assemble the two halves in a three-fingered grip and then slide the halves together… which is usually pretty simple – but this variant’s missing bits mean that you can’t just squeeze the three pieces together in each hand, you have to hold each of the three pieces in the right place relative to the others, without the bit in the middle that you’d normally be pushing against… which makes this fella pretty fiddly to reassemble – not horrible, just tricky! 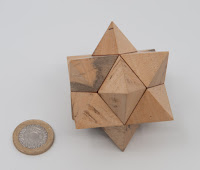 The final new addition to the canon is the Sneaky Star… looks just like a Coffin Star (give or take the fancy spalted wood) but it open in a rather different manner… and like 4B it has a cubic cavity in the centre – except this one comes with a pretty little cubic box in the centre – a puzzle box that is one inch cubed – and it’s called Inchricate. It is a fine puzzle on its own…

I’ve given it to a few puzzlers over the last month or so and virtually all of them have wondered out loud if I was having them on, sought encouragement and even advice. 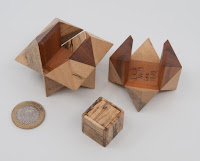 It’s an excellent little box that uses most of what you “know” about puzzle boxes against you… so some of the moves are unconventional to say the least, so of the usual “rules” about “once this face moves, that must be the next face to move” are deliberately flouted, resulting in a wonderful little puzzle box challenge that literally fits into a 1 cubic inch cavity inside the Sneaky Star.