This one was always going to be a little busier than usual… it started with what sounded like a good joke: you have a Scot and an Irish woman at home, and a Bulgarian, an American and a chap from The Netherlands in an airport coffee shop – that’s how my MPP XXXiii started… having safely collected Dick from his train, and Louis and Stefan from their flights, we headed home to where Ethel was already keeping Gill company…

Quick introductions to make sure everyone knew one another, sort out the sleeping arrangements and then we were all huddled around the dining room table feeding our faces… or refuelling for the inevitable puzzling that would follow.

After dinner we dragged out some puzzles and forced ourselves to pretend we were enjoying ourselves… OK, that bit wasn’t really all that hard!

Ethel had brought several crates of puzzles she wanted to re-home and we spent a while helping her sort them into the more valuable and less valuable buckets to ease selling them. In the process I couldn’t help myself and ended up adding another four or five to the one lovely puzzle she’d brought through especially for me. (An old Telephone Box in case you’re interested.)

After a couple of hours of chatting, rearranging Ethel’s crates of puzzles and even playing with the odd puzzle, we each took ourselves off to bed… I say we did, but actually I have no idea whether Louis and Stefan actually went to sleep that night or not… I’m sure they did at some point. 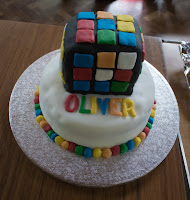 Next morning after a goodly number of croissant et pain au chocolat we headed down to the hall to get things set up – only to find a rather strange delivery leaning up against the door to the hall: addressed to Big-Steve was the largest tongue depressor I’ve seen, so far! We took a couple of pics of it and then put it back where we’d found it waiting for it’s addressee to arrive.

Puzzlers from around the UK began arriving and I headed out to collect a couple of Danes from their nearby hostelry and then a Persian bloke who was arriving by train – I told you it was going to be a busy one! 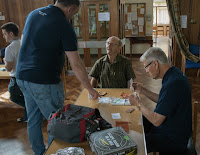 By then most people had arrived and our merry little band settled into a routine of raking through Ethel’s crates in search of treasure, rummaging through other puzzlers’ latest finds in search of a new challenge, and refuelling on various caffeinated beverages and cakes and biscuits – these things are tough, let me tell you!

Dick had arrived with commemorative gifts for all – the ominously named “Satan’s Spiral” was duly gifted to everyone who showed up. It’s definitely a new variant for me, with a slanted Finnish trapeze holding both a ring and little spiral devil that gives the puzzle its name… I’d remarked on the fact that the trapeze has been bent all skew and reliably informed that was required in order for the puzzle to be solvable at all – that’s me told! :-) A little idle fiddling with it over the course of the weekend had me confirming to myself that its name has probably been well earned… and the lack of anyone seeming to solve it at MPP makes me believe it’s going to be a real test!

Dick had been working on a maths puzzle from David Singmaster over the previous couple of weeks and I’d found it fascinating considering the various interesting permutations of the Battersea Power Station problem – I’m sure that will be its name! On the Saturday Michael and Dick spent a while poring over Dick’s notes and seeking more enlightenment – it’s great to see someone keeping up with Dick… lord knows I struggle to!

Big-Steve had announced on the inter-web a couple of days earlier that he’d received a massive tongue depressor in the post (or as Nora put it: “Your friends are being silly again!”) but as he hadn’t had time to unwrap it, he would bring it along to MPP for the grand unveiling… which he did, only to find that it had been seriously surpassed by the monster waiting patiently for him next to the door outside the hall… and yes, he did spot it, probably as he drove into the parking lot!

We shared the Steve's unbridled joy as he unwrapped his “massive tongue depressor” which was instantly only about half the size of the newest one… Steve was somewhat bemused by this but did good-naturedly pose for a few pictures to demonstrate the scale of the thing… I reckon it stands about six-foot tall – Big-Steve’s a really tall fella (clue’s in the name, folks!) and he was only just peering over it.

I’d taken along a lovely little puzzle that I’d discovered consisting of four black dodecahedrons that sit in a bright green acrylic tray… turning the tray over you’re asked to created a truncated octahedron that fits in that side of the tray… it’s a bit tricky as the shapes you have don’t really combine easily to form said truncated octahedron… I’d been merrily showing it to everyone who was there all day with most people discovering its secrets and merrily building a truncated octahedron when Michael told me it had been designed by his friend Robert Reid and was called “Martingar” – hopefully I’ve spelt that right – in honour of the great man himself… probably manufactured by George Miller some time ago - brilliant to find out about the origins of my latest neat little find.

Speaking of Michael, he’d brought along a new design called “T’s, Q’s & P’s” that kept several people amused during the course of the day. It consists of three triangles which are used to created a long list of shapes including several types of triangles, quadrilaterals and pentagons… all from three little triangles! Lovely little puzzle to fiddle with when the mood takes… and I’m rather chuffed to say that I got given a copy for my collection – thanks Michael! 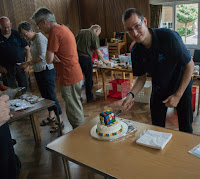 Oli had celebrated his birthday earlier in the week and arrived with Kirsty, Oscar and Jack in tow and bearing a large birthday cake – complete with a twisty cake topping… it was carved at an appropriated hour and everyone pronounced it a triumph for Kirsty – looked brilliant inside too! :-) 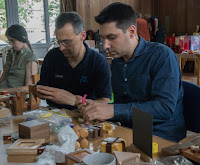 Stefan had asked me to bring along a copy of Stumbling Blocks as he’d missed out on getting a copy from Eric recently… let’s just say that he made remarkably short work of it – in fact I think he solved it faster than I did when I received this copy and I’d already solved a copy of the same puzzle made by Tom Lensch! He is a pretty impressive puzzle solver! He then proceeded to spend the rest of the day powering through a vast number of puzzles he’d never seen before…

Louis had brought along a couple of copies of his latest Tricklock design for 2018 to roadtest it on a bunch of unruly puzzlers - it survived with flying colours  and Louis was unable to elicit any improvements from the assembled masses... so it will be committed to production in time for the next major puzzle get-together... Thanks for my copy, Louis! :-) 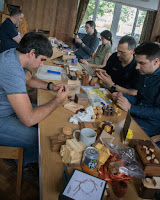 Ed continued to power through pretty much all of the Karakuri boxes we managed to throw at him (figuratively!!!) – including a new copy of Cassiopeia and an old Kamei Parcel box that I’ve had on the shelf to be solved for a few months now… I’d been unable to open it – he solved it in a couple of minutes and then showed me how to open it… I’m beginning to think that most other puzzlers are better at solving these things than I am!

Somewhere in the middle we wandered into the village proper for pig rolls, kebabs and fish suppers – amusingly the local vendors have now learnt to spot the familiar blue polo shirts and stock up in time for the incoming hordes… they seem happy.

Somewhere around five-thirty-ish we all decamp up to our place for some decidedly lower key puzzling and a serious fish supper. The weather has been gloriously un-British so a bunch of us end up chatting outside in the sunshine over some cold beverages…

At one point there’s some tongue depressor silliness and I risk being caught with the largest of Big-Steve’s tongue depressors hidden somewhere in my house… we manage to find them in time for Big-Steve not to have to leave them behind – he’d have been gutted, I’m sure!

Despite several puzzlers going home with a number of puzzles from Ethel’s crates, she reckons it’s hardly put a dent in them – I think she means that as a challenge, folks! Come prepared next time…

As I’d done the night before, I left Louis and Stefan puzzling furiously when I crashed – they seemed vaguely happy though so I didn’t feel too bad!

Next morning saw a feast of bacon rolls for breakfast before taking Louis and Stefan to the airport for their flight to Schiphol and putting Dick on a train back toward Wimbledon… another jolly fine MPP comes to an end – thank you all for a brilliant weekend! 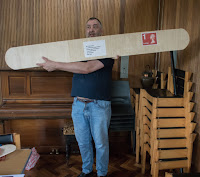