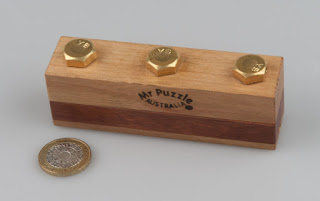 A rather overdue write-up.

Considering I’ve been sitting on this wonderful puzzle for virtually a year, it’s nice to finally be able to write about it…

I was given a sneaky copy of this puzzle when Brian and Sue were visiting ahead of going over to Paris for IPP37.  It’s been played with a fair amount at several MPPs over the past year and several visiting puzzlers have had it foisted upon them with the line “You’ll like this…”. But up until fairly recently, it hadn’t been for sale so I had to keep this little gem to myself. 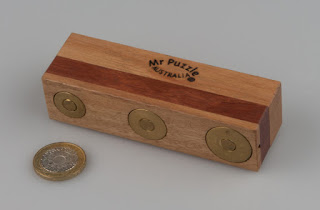 Brian describes it as a sequential discovery puzzle, but I should probably warn you that it’s in fact a box – cue Kevin’s excuses – there are a couple of small compartments locked away inside… well locked away.

At the start you are presented with what appears to be a few bits of woods that are bolted together with three rather large YB bolts – no cheap shots about Brian Young being from down under, right! The “nuts” on those bolts appear to be round and rather unhelpfully countersunk into the bottom plank… and at the start the bolts appear to turn freely – as do the “nuts” – so you don’t really get anywhere by doing that…

Closer inspection shows a few small holes all over the place and playing around with the nuts some more locks them up, sometimes… GAME ON!

Some exploration will begin unearthing some potentially interesting tools and with a little thought you’ll work out how to get the first couple of bolts freed… that last bolt, however is another story entirely. 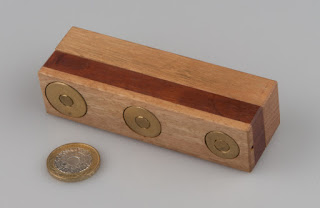 I’ve watched grown puzzlers virtually reduced to tears at this point… they know what they have to do, they’ve done it a few times already on this puzzle, but they cannot do it again one last time…

Truth be told, that last step is really what the whole puzzle is about – everything up until then is just an interesting little interlude leading you up the garden path to the real deal (to mix a few metaphors). They sucker you into thinking that you know where this is all leading… and then Brian (figuratively) punches you in the stomach.

…but when you do get to your moment of “A-Ha!” it is wonderfully sweet… well worth the struggle along the way.
Posted by allard at 07:42