The short version: Kel socks it out of the park! 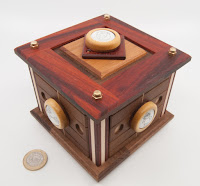 Kelly had already been teasing a new puzzle box on social media for a while when I had an email from him asking if I’d be interested in  acquiring a copy. Facebook had been littered with tales of a gang of five fluffy four-legged creatures and their (stolen) fantastical flying machine of fun. Not just tales, there were pics too, and they looked thoroughly fab. So I piled in and managed to acquire #5 of the 17 copies made and released into the wild…

The flight across the pond was completed in no time at all, no doubt due to the ewes' patented rangtangdangular oximobinator.

It’s a mighty handsome little puzzle box – complete with 5 portholes each with one of the ewes peeking out – courtesy of some custom art that Kelly commissioned via ‘tinterweb. There’s an obvious top to the box, and four clear sides, all of which have a porthole on them, and then the bottom has a (not so) secret escape hatch built into it…

You mission is to release Wee Fae from the top of the EWE EFO – because she just wants to go home while the rest of the crew want to go off exploring, apparently. All righty then…

You are told to leave the four brass nuts alone until you’ve totally solved the puzzle and released Wee Fae – and then you’re free to undo the nuts and remove all the innards and marvel at them… Kelly also tells you there aren’t any tricky magnets at play and you won’t need to tap or bash anything to “encourage” it.

Starting with a bot of exploring around the sides and the top, you’ll find lots of interesting “stuff” going on, but not a to of it will really do much – you can tell that they will do something at some point, e.g. the tiniest wiggle might suggest this is a panel that could move or open at some stage, but right now, they’re all rather tightly locked in place.

A few of the little portholes will move, and aside form making it look like the little ewes are inside a washing machine, that doesn’t seem to do an awful lot. At some point you might even find linkages between the different sides, or indeed between a side and some mystical hidden forcefield, and you’ll need to learn how to control them in order to make progress.

Along the way you will almost certainly come across some rather useful tools that will assist in your reconnoitring, for reconnoitre you must!

I really enjoyed the whole exploration of this this little piece of art – having a pile of tools laid out next to a partially dismantled EWE EFO wondering which panel to attack next and what tools could possibly be useful to me. In all I spent a couple of wonderful afternoons exploring this craft and slowly progressing through the Trap Door, the Guillotine and the Four Finger Force Field. (Yup, Kelly really went to town on the backstory and the mythology of this puzzle – it was clearly a massive labour of love for him!)

For me the best part was getting Wee Fae out of her turret and then dismantling the rest of the craft to see exactly what all those strange mechanisms inside the craft really were… and Kelly has done a super job in there – the mechanisms are simple once you see them, but delightfully duplicitous when you’re trying to work out how to release them while you can’t see most of the gubbins in there…

Everything is always fair and yields to some sensible Think(c)ing though… just give yourself a couple of afternoons like I did – it’s a wonderful puzzle to wile away several happy hours!

Once again Kelly has outdone himself, producing a stunning looker of a puzzle with some wonderfully interesting mechanisms and locks along the way.