I guess it’s traditional for me to explain my Christmas puzzle round about now, so here goes…

This year’s puzzle was a bit different – for one thing, you actually had to do some work before you even got hold of the real puzzle, but in my defence, I did try and leave some breadcrumbs!

First of all there was the colourful text – that was quite unusual for my blog… and then there were some stray bits of capitalisation – collect all the unexpected capitals and you were told to “LOOK CLOSER”… which considered with the colours was leading you to look at the blog text – where each para had some stray text after it in white on white – which is either visible when highlighted or if you’re looking at the page source code… that resolves to “bit.ly/allard25122021” and if you pop that into a browser you’ll find yourself looking at a vaguely familiar format for my Christmas Puzzles.. 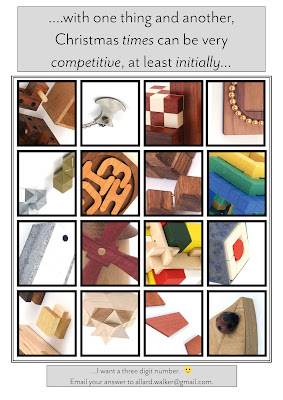 That gives you instructions ("I want a three digit number") and some clues in the form of text and pictures… the flavourtext gives some helpful clues referring to “times”, “competitive” and “initially” … and if you look VERY closely at the bottom right of the frame around the pics you’ll see some text saying “Thanks Nick & John”. Hopefully you’ll recognise a couple of the puzzles among the sixteen and realise they’ve all been entries in the annual Puzzle Design Competition (latterly the Nob Yoshigahara Puzzle Design Competition) which is run by Nick Baxter and hosted on John Rausch’s website… which makes sense of the “competitive” reference and the “Thanks Nick & John” note.

Now you’re in the familiar territory of having to find data points on all of the puzzles in the grid, which you can do by using the search functionality on John’s website – if you put in blank search parameters it will list all of the entries by year…

If you start doing this and work your way through the grid you’ll notice that they’re almost perfectly in alphabetical order, perhaps except for the first entry if you didn’t use it’s full name… which is “(Now they know how many holes it takes to fill) The L-Bert Hall”. If you list all the puzzle names and the years they entered (“times” :-) ), you’ll notice that the entry years are unique, which is handy and provides a natural order, which can’t be a coincidence. [Orientation of the pics was just me being a b@stard!]

Ordering the puzzle names by entry year and focusing just on the first letters (“initially”) provides the following text: “WELLDONEBURRMUDA”, or if you add a few spaces “WELL DONE BURRMUDA”. Hopefully the “WELL DONE” bit gave you some confidence that you were on the right track… then you just needed to work out how to get a three-digit number out of that… and hopefully it wasn’t too much of a stretch to realise that Burrmuda was a Stewart Coffin design (and not a country) and he always gives his designs a number – Burrmuda happened to be 112, which in turn happens to be a three-digit number, the final confirmer.

Massive congratulations to Brendan Perez who was the first person to crack my puzzle in just under 12 hours from publication, while navigating Christmas duties! Around four hours later he was joined on the podium by Steve Canfield (who went to a lot more trouble than I’ve ever gone to for his first Christmas puzzle – check it out!). The final spot on the podium was taken by Mike Quigley later on Boxing Day morning, with Steve Nicholls hot on his heels (possibly due to some collaborative work there). Amy and Josh were the final two solvers later on boxing Day and then we’ve had no more people solve it since then… so you should all consider yourselves a rarefied bunch of puzzlers – well done! And thanks for playing along!!

Some goodies from my drawer of swaps will be heading out to the first three places shortly.

[Thanks to Nick & John for providing the fodder for the hunt and to Nick for checking my work.]

Fun fact: I hadn't intended or even realised that the puzzles were pretty much in alphabetical order in the grid - and only when someone pointed it out did I realise that it was the result of InDesign's 'Place' function - when you place a bunch of selected files in one go, they go in alphabetically by filename - and I had the puzzle names at the start of the filenames.
Posted by allard at 09:00