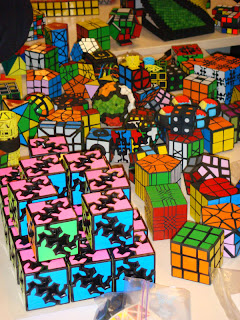 Next morning back at the Micro Centre, after checking out of the hotel and tossing our bags in Louis’ car, things looked rather different. The night before there were two or three tables full of puzzles (mainly courtesy of messrs Strijbos and Schweitzer) – now there must have been twenty different folks displaying their wares and the remaining tables were filling up fast. Where there were ten or twenty folks milling around the night before there were now eighty or a hundred – and we thought we’d got there early!

First order of business for the day was to say good morning to our hosts from the night before and while I was standing at Wil’s table I became aware of a bear of a man standing next to me, a quick glance at his name tag and I did a double take – then I spotted a familiar looking puzzle up on a cabinet behind Wil – one I’d been keeping an eye out for for a little while, so I did the obvious thing and turned to the bear next to me and asked him if he’d autograph the Queen if I bought it from Wil – and that’s how I got to meet Marcel Gillen. (I did buy it, but didn’t insist on Marcel autographing it.)

Marcel then gave us a tour through his table down the other end of the hall and despite me being rubbish at packing puzzles I came away with a copy of his exchange puzzle from Berlin this year- even though he was happily telling us that nobody had solved it yet! I don’t hold out much hope, but it does look very interesting and looks fun to fiddle with!

While wandering around aimlessly I spotted a name tag I recognised from an auction I’d recently bid on – a pair of silhouette puzzles from the IPP in Berlin. While we were discussing payment and shipping after the auction, we became aware that we’d both be in Eindhoven for DCD so agreed to meet there and exchange puzzles for cash – cool! So I got to meet the German puzzler behind the Geduldspiele site and pick up a pair of unusual silhouette puzzles. He was hoping to have a whole bunch of his puzzles cut for DCD but had a bit of a problem that burned out his laser cutter the week before DCD and the replacement parts had arrived too late to produce many puzzles. 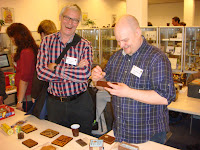 Back in the general vicinity of Bernhard’s table I noticed two gents talking animatedly over a little wooden box - admittedly not that unusual at this sort of gathering, but I recognised the inlay work on the box from a photo posted on Renegades a little while back. A quick check on the name badge confirmed this was Jack Krijnen showing off his own version of a travel burr set – so I introduced myself and met another Renegade.

Jack’s burr set really is something else – it’s a 42-piece set of notchable marble wood pieces in their own beautiful wooden box, complete with inlaid detailing on the lid – apparently Jack’s first attempt at inlay work – if he tries any harder he’s at serious risk of becoming rather jolly good at this! :-)  The thought that’s clearly gone into this set is great – right down to the compartment for the cards carrying the various combinations of pieces to build burrs from – gorgeous.

Soon after meeting Jack, another  Renegade, the legendary burr-bloke, Ronald Kint Bruynseels wandered past so I said hello to him and heard about some of the interesting new ideas that he’s currently working on – and if he manages to work out a couple of the remaining challenges with his current ideas he’s going to unleash some very interesting new designs on a grateful puzzling public.

Back at Wil’s table he introduced me to Rob Hegge, who in turn introduced himself with a smile as “Hi, I’m Rob, I don’t have a blog,” – a couple of folks mentioned the blog during the course of the day and it still surprises me a bit that real puzzle people actually seem to read it. A little while later I relieved Rob of a couple of his recent exchange puzzles: two packing puzzles (yes, because I’m rubbish at them!)  and a little board burr. The two packing puzzles came on the cruise with me and have given me quite a lot of fun and more than a little frustration, but both have now been tamed and I have photographic evidence to prove it (and to remind me what the solution looked like!). 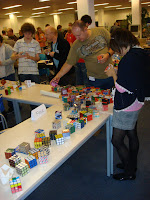 During the course of the morning, Geert Hellings announced that Georges Helms had decided to downsize his puzzle collection and had donated a number of prizes for the Speed-cubing competition and had also donated a couple of tables-full of twisty puzzles for anyone to help themselves to. There must have been quite a bunch of them because despite the considerable attention those tables received, there were still stacks of twisties left later on in the day when I had a rake through them – by that stage there were mostly 3*3*3 cubes left, but they were all different, from branded puzzles advertising mobile phone networks to Disney characters – one of which is now headed for Nigel’s girls to play with. Thanks Georges – nice one! 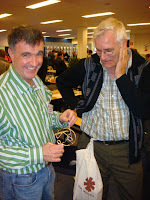 The NKC laid on a great lunch for everyone, ensuring that there were plenty of complimentary drinks and snacks on the go throughout the day – all included in the EUR 10 entry fee for adults. Mieke and the kids joined us for a few hours in the afternoon and it was great to see the kids faces when they spotted puzzles they recognised and even nicer to see how the stall-holders went out of their way to spend time chatting to the kids and show them new puzzles ... each of the kids came away with a new puzzle (only fair since Louis had picked up a couple for himself already!) and had great fun sitting at a table playing with them during the course of the afternoon.

While we were sitting at the table I noticed someone playing with one or two things on Wil’s table and felt the need to go over and thank this gentleman for literally saving me months of my life –and that’s how I met Andreas Roever, author of Burr Tools. After getting over my slightly unusual means of introducing myself, Andreas chatted about his plans for renewing the user interface as a pre-requisite for introducing some new functionality and generally tidying things up a bit. I asked him if he was sick and tired of people asking him when Burr Tools will be able to handle rotations, thinking he’d be sick and tired of the standard question, instead he was happy to talk about how he already had a plan for how it could be done and had some ideas for implementing it, but that it would require a total overhaul of the guts of Burr Tools which is currently based on pieces never being able to rotate – what a nice bloke – and he really has saved me months of my life!

During the course of the afternoon I did a little more shopping at the Strijbos shop, picking up a copy of his exchange puzzle from Berlin, some Doughnuts, the other aluminium dovetail and a floppy cube to replace one that broke a little while ago.

The Krasnoukov family had set up shop next to Wil’s table and seemed to be doing a brisk trade all day. Their exploding / trisected cubes seemed pretty popular and Vladimir seemed to take great delight in demonstrating his Paradox exchange puzzle that appears to bend space and matter ever so slightly between two apparently equal halves of a square. They also had a selection of Vladimir’s excellent packing puzzles available next to a set of hand-carved wooden replica tools (pliers, side-cutters and the like!) - beautiful work.

We spent the last hour or so upstairs watching the first part of the Speed-cubing finals – wow these folks are incredible! We’d seen snatches of the blindfold competition earlier on and that was pretty mind-blowing – how anyone can memorise a cube and picture the interactions of the moves on the starting position in order to work out how to solve the cube is quite simply beyond me.  It was quite interesting to see the different strategies coming out, from “slow and steady to get a time on the board” through to “if this works I’ll be untouchable”. Quite a few times there’d be a finishing flurry, followed by a downed cube and hands on the timer pad, only to be greeted by a groan when the blindfold went up to be greeted by the sight of a couple of misplaced cubies – invariably followed by the briefest of post mortem to confirm where things must have gone awry – even that was blowing my little mind!

There was a brief interlude between the humans battling for supremacy with the first international Lego robot speed-cubing competition – held between a robot from France and one from Germany. These robots are pretty interesting being manufactured from standard components and using only Lego hardware, so the solving routine needs to fit in the Mindstorm’s available100k or so of memory. A few fraught minutes of tense competition saw the German machine toss its cube into the air a couple of times, getting it replaced by its handler most times, before the French robot stormed to victory netting Jean-Claude Mathieu a bottle of wine and the adulation of the assembled masses.

The finals of the 3*3*3 cube solving competition was a pretty frenetic affair and we got about halfway through the finals when we had to leave to catch our plane back to Blighty. Up until then there’d been quite a few sub 10 second solves, all greeted with applause -  but Sod’s Law dictates that about 10 minutes after we left for the airport, the European record was toppled!
That Irish budget airline that shall not be named since the time they left Gill and I in a tent in Beauvais after cancelling their last flight out, got Nigel and I back to Stansted without any fuss and he took care of the drive back to Birmingham – thanks mate.

That was one heck of a weekend. I got to meet and spend time with some of the legends I’d only ever read about or swapped emails with. I got to play with some very rare puzzles and managed to add a couple of tremendous puzzles to my little collection – what a great weekend.