A Quick Thank You


...to everyone who was such a good sport at IPP and agreed to pose for a picture with my odd little Joker.

For those who weren’t there, or I somehow managed to miss: I’d taken along a puzzle box made by my puzzling-mate Louis, and anyone who had a go on the A-Mazing Box #3, or who got one of Louis’ impossible folding cards from me, was asked if they’d mind posing with a Joker that Louis had included in the final batch of cards he’d sent to me. On this particular Joker he’d written “Thanks for taking me to the IPP! Regards Louis” so I decided it would be a good idea to take the Joker along and get some photos of folks holding up the card.

When I mentioned that idea to Gill, she thought it would be a lot of fun and suggested that we take a bunch of touristy pics with the A-Mazing Box #3 visiting all the local tourist spots ... and then put all the pics into a scrapbook for Louis as a little thank-you for his awesome work on those cards...

...so pretty much everyone who played with the box or who got an impossible card from me were asked to pose for their picture with the Joker and then told the story behind the strange photographic request ... I found it pretty cool that everyone instantly agreed to the odd request, and when I told them about my little project afterwards, they were all chuffed to have been asked to take part as well... ergo Puzzlers are Cool!

After I got back from IPP it took a couple of weeks to line up all the photos, get them properly photo-shopped and arrange the layout of the book for printing – and in the mean time I’d started posting some of my pics on the blog and Louis invariably spotted some of the pics with puzzlers from around the world holding what looked like the card he’d sent me ... so he asked about it and I told him to mind his own business!

Well, this past week the book (Awesome American Adventures of the A-MAZING BOX #3) was finally delivered to Louis and I think he likes it ... so thank you to all of the folks who helped me out at IPP by posing with an odd Joker – you’ve helped me give one of my puzzling mates a really cool gift – thanks!.

The pic below is a collage of most of the 100 or so pics that went into the book ... feel free to click to zoom in... 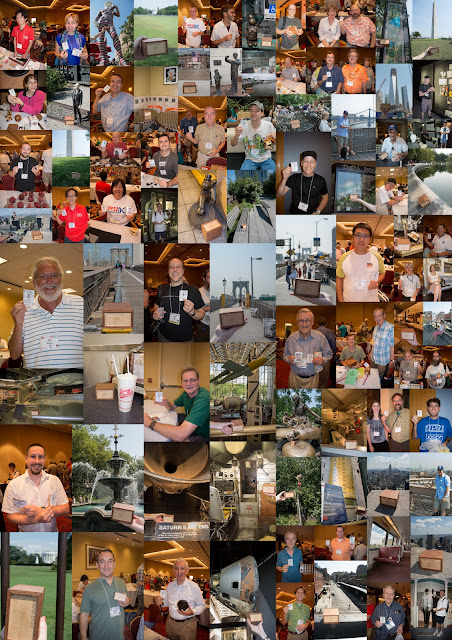