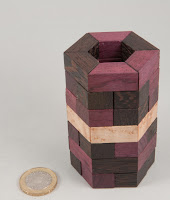 Before I went along to IPP32 I’d arranged to buy one of Neil’s latest creations, Hex Stairs, designed by his mate Derek Bosch. Neil’s written a series of terrific blog posts starting over here chronicling his build and finish process on these puzzles ... including the production of the first prototype that turns out a bit larger than he’s expecting – so large in fact that you can put a bottle of Guinness inside it ... although someone seeing that picture has lead to Neil being commissioned to build a super-sized version to fit around a wine bottle ... the mother of all Hex Stairs?

Neil brought out a couple of copies on the Wednesday evening in the bar and I chose a great looking copy in wenge, purpleheart and curly maple. Neil’s clearly spent a lot of time on the finishing and he’s brought out the life in the woods he’s used. I like the combination of the deep, dark wenge against the reasonably deep purpleheart, being totally offset by the maple in the middle band. 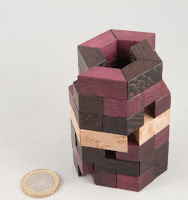 Hex Stairs consists of 6 (hex!) winding pieces in alternating colours that interlock to form a stable hexagonal tube. Given the way the colours alternate, there are a few different ways to arrange the pieces – but you’ll always have the maple band around the middle. The shapes of the pieces are such that if you handle the assembled tube naturally, it will stay pretty resolutely together (the natural grip pushes opposite sides together, and as long as you’re spreading that pressure across more than one layer, it pushes together). If however, you start putting pressure across individual layers, you’re likely to find, as Jim did in the bar that night, that this sucker’ll come right apart on you! And once it starts coming apart, you’re better off letting it come all the way apart because putting it back together needs all of the pieces to be rather neatly aligned before you can slide them all together. 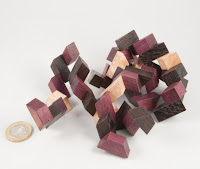 That need for absolute alignment was my undoing when I was fiddling around with Neil’s mini-sized copy of Hex Stairs in the bar that night – his tolerances were unbelievable on that skinny little copy... thankfully mine's a little more forgiving so I can actually reassemble it without too much fiddling around looking like I haven’t a clue what I’m doing!

It’s a cute design from Derek – it definitely adds a bit more of a twist to things than Oskar’s Domino Tower and the extra pieces make it a bit more interesting to get things lined up neatly enough ... and terrific craftsmanship from The Juggler ... Thanks Neil for my second Juggler-crafted-puzzle!

... I also got a couple of walnut Revomaze stands that Neil offered to build after the guys at Revomaze stopped offering wooden stands before they stopped selling puzzles – resulting in a few of us having nice wooden stands for some of our puzzles and leaving the rest of them rolling around on a shelf.

The stands are pretty similar to the original stands so they fit right in with all the others and provide snug support to a couple of rather nice little puzzles ... and came in handy recently to take some pics of the latest one being opened... Cheers for that too, Neil. 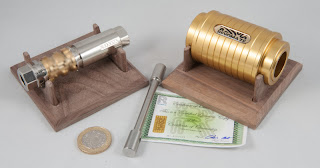