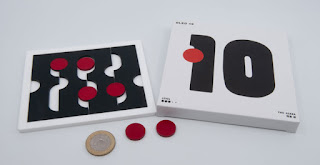 Yuu Asaka burst into my puzzling consciousness (is that a thing?!) at the IPP38 Nob Yoshigahara Puzzle Design Competition with his Jigsaw 29… think of it as a jigsaw and it simply won’t compute… think of it as a packing puzzle, and you’re on your way… it was a lovely playful design that used your inbuilt urges to confound you totally.

Since then I’ve been a big fan of Jigsaw 19, Wave 5 and Wave 7 – although I thought Ice 9 was an absolute SOD!

A couple of new puzzles recently appeared in the UTTO-PUZZLE shop so I acquired a few copies in the name of research… and I think OLEO 10 is brilliant!

Four large black pieces just fit inside a neat white frame and your task is to (clearly) arrange the black pieces in the frame so that you can add six little red circles into the frame as well… simples! 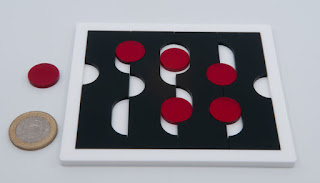 Try as you might, you will not find a way of ordering those black pieces so that you can engineer six gaps for those pesky little round red pieces – I mean there are plenty of cut-outs on the black bits to fiddle around and experiment with – and there are clearly “enough” of those cut-outs – they’re just never where you actually want the last one or two of them to be…

I spent ages trying the same thing over and over again, fully expecting a different outcome (yes, I know, I’ve used that same quotation in this very blog, about myself, several times!) – before I spent some time think(c)ing about this puzzle, and the designer, and then a whole new world opened up to me… along with several(!) solutions.

It’s a brilliant puzzle – definitely another classic and right up there with the Waves and Jigsaws from this fine designer!