A good friend recently offered me a number of puzzles made by Tom Lensch and I had a really hard time turning any of them down… in the end, the only reason I could find for not taking any of them was that I already had a copy, made by Tom, in the hoard… I did not have a copy of Oskar’s Pentasticks made by Tom, so that one headed my way.

This was a new puzzle for me – I literally hadn’t ever even seen a pic of one of these before so I was delighted to sit down and play with it when it arrived.

At first you have what seems to be a pile of sticks in the shape of a Pentagon, with the outline of a pentagon drawn rather badly on both sides of the assembly… and this struck me as odd, because Tom’s work is only ever absolutely spot-on!

Start taking it apart and it’s clear that the four layers of sticks are somewhat chaotically joined, so you can’t just slide one piece out… there is a whole lotta co-ordinate motion going on here… which scared me – so the first few times I tried to summon up the courage to disassemble this guy, I wimped out.

Eventually I threw caution to the wind and another log on the fire and pulled it all apart… mixed up the pieces and then began trying for a reassembly… and then it hit me: the state it arrived in isn’t the solved state – just an almost solved state – those lines on the pentagon that didn’t quite join up weren’t some sort of misalignment they were the subtle goading’s of a great puzzle designer and a superb craftsman telling you to try again. 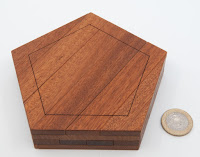 So I did, once or three times more until I finally manged to land on an assembly that should(!) end up with all of the lines properly aligned… of course getting everything physically assembled remains as the final, rather interesting, challenge – and a deft touch definitely helps on that front.

When it’s properly assembled everything lines up perfectly – as you’d expect from that man Lensch!

My humblest apologies for even entertaining the mere thought that it might not possibly be intended.