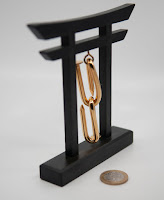 I’ve been after a copy of this puzzle for a while now so I was really chuffed when I managed to find a copy at a reasonable price recently. What makes this puzzle really stand out is its presentation: designed to be used as Brian’s exchange for IPP24 in Tokyo, the stand for the disentanglement puzzle resembles a classic Japanese torii, or archway – and I suspect that this little extra probably took as much, if not more effort than making the actual puzzle bits… the effort’s really worthwhile in my humble opinion as it makes this puzzle instantly recognisable.

The disentanglement puzzle itself consists of a pair of identical bent nails joined at the hip. Clearly they’ve been carefully doctored to get them into this situation – nails don’t normally come in gold, do they? Oh, and they’re rather bent! 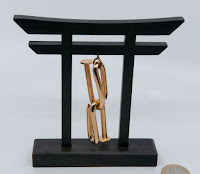 Fiddling with them produces remarkably few available moves – and even though it might look familiar when you first pick this puzzle up, you’ll soon realise there are a few variants and this one’s different… in fact the difference comes from a discovery while Brian was making up another puzzle altogether.

You’ll solve it eventually but hopefully you’ll have the same “That’s clever!” reaction that I had when I first played with this copy…

Definitely one of the most beautifully presented disentanglements around… and a mighty fine puzzle too!