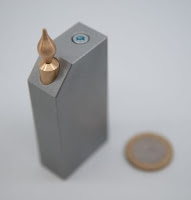 With Wil’s recent success at encouraging Roger D back into the puzzle-making (and designing!) game, I patiently joined the queue for a copy of Feuerzeug as I hadn’t previously managed to find one for sale at what I considered a reasonable price.

Patience paid off and a handsome new copy duly arrived in Barnt Green – I was well-chuffed!

Feuerzeug is German for “lighter” – which should probably be obvious from the accompanying pics as the little brass and aluminium gadget looks just like a lighter with a flame coming out of it. Your goal is to release the flame – which sounds innocuous enough. Achieving said release is less so…

The brass flame is clearly going to come out at some point – it wiggles ever so slightly, but cannot be yanked out – feel free to try! The only other feature (apart from the “F” logo between the initials “RD”) is a recessed hex bolt which doesn’t seem interested in much at all.

Shaking and tilting the puzzle suggests there might be something else at play inside, but how the heck you use that information to release the flipping flame, is a mighty large puzzle.

It turns out that some fancy footwork will cause some magic to happen and then you can inveigle something useful to take place which will in turn cause the puzzle to levitate and make breakfast, releasing the flame in the process… some of that might be true – but the flame can definitely be (fully) released… your mission, should you choose to accept it…

Email ThisBlogThis!Share to TwitterShare to FacebookShare to Pinterest
Labels: Roger