There are a few websites that I like to keep an eye on fairly regularly just in case something interesting comes up – Cubic Dissections is one of them. A couple of weeks back I happened to notice some really weird things happening to some of the listings – they seemed to be multiplying and moving around on the web page, then they started changing, but they all seemed to be referring to items that were sold out.

The next day the movements seemed to begin to take shape and settle down and shortly after that I received Eric’s traditional email warning that some new stuff had been added to the web site for anyone that was interested.

Now last time that happened a couple of months back, the warning email arrived just after I’d turned off the netbook for the night and by the time I logged on the next morning, a couple of the really interesting items had already all been sold out – dagnabbit!

I did get a few really nice items anyway, and managed to pick up a copy of Three Sticks Trapped when Oli decided to get rid of a couple of the items he’d managed to buy, so it wasn’t a total loss by any means – just in case you’re beginning to feel the need to be sympathetic!

This time around, things were different – I piled in straight away and managed to get everything that I wanted – and Eric’s usual efficiency and the fact that the parcel came straight to my front door (instead of spending a week or so in customs first!) meant that I had my new toys pretty soon afterwards – and in good time for the next MPP where a few of them got passed around among some of the folks who hadn’t managed to pile in quite as quickly as I had.

Here are the highlights: 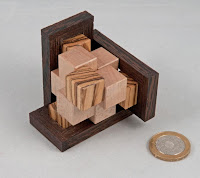 Stand Py Me was designed by Gregory Benedetti and published earlier this year. It was added to Ishino’s website in May this year and 4 short months later(!) there was a discussion about it on Renegades, with Gregory explaining the name was a play on words around a “Py-ramid on a Stand” – with the basic internal structure resembling those pesky offset cube puzzles like Coffin’s rather famous three-piece block puzzle.

Stand Py Me starts with a four-piece offset cube structure in the shape of a tetrahedron – but adds a twist by insisting that it should be built in a frame that captures three sides of the pyramid. 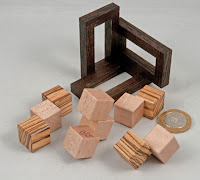 Now Gregory is rather well-known for his puzzles having a bit of a twist to them – in fact his Youtube channel name is “Rotations Required” ... so when I attacked this puzzle, I had that foremost in my mind and subsequently spent several fruitless sessions trying to engineer a means of partially assembling the pyramid in situ and then twisting the last pieces into place. After trying that approach for quite a while, I wondered out loud if there might be a simpler, purer, better way of doing things –the dogs gave me a very strange look at this point. From there it honestly didn’t take long to find the right, rather elegant solution that allows everything to slide perfectly into place out of position and then slide into the final positions required to make the pyramid.

Eric has made these puzzles beautifully - his attention to the details is staggering: just take a look at the joints on those frames! And his kindly using a contrasting wood for the extremities definitely helps numpties like me solve the thing.

Neil’s already shared his thoughts on this puzzle in his blog and you can read them over here.

Two Pi is another Gregory Benedetti design from 2009.

This one is a three-piece cube that Eric’s made out of Zebrawood. 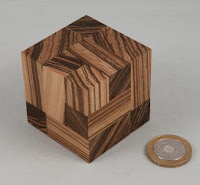 It’s a reasonably straight-forward co-ordinated motion puzzle with the shapes of the pieces designed to have you pulling against yourself for all of the usual means of gripping a cube. There’s another interesting little feature of the design that from some angles, it looks like a simple 3*3*3 cube, but from other angles there are clearly some rather odd diagonals. The coolest thing about the cube is that playing with it and trying to tug it apart using any natural feeling grip will give the impression of a totally unyielding cube – yet in the right orientation, a simple spin on a flat surface will send the pieces flying apart. [Don’t do that near the edge of a desk like I did, or one of the pieces may well end up on the floor in more bits than desired – it’s back together again, but it doesn’t fly apart quite as slickly as after Eric had put it together the first time!]

Eric made up a beautiful version of Martin Watson’s Digigrams. Martin tells the story on his website about coming up with the idea for the puzzle one night when he couldn’t sleep and found himself watching his digital alarm clock tick over. Since then it’s been made in several formats and sizes (e..g take a Look at Steve Strickland’s version over here) and served as an IPP exchange puzzle in Tokyo in 2001.

The premise is simple: arrange the digits 0-9 inside the 4*5 tray. 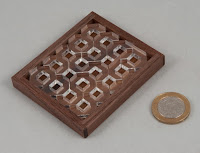 Eric’s version uses clear laser-cut acrylic digits and they look terrific against the grandillo base of the tray.

You can read Jerry’s thoughts on this puzzle over here. 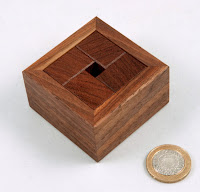 Galaxy by Osanori Yamamoto was one of the puzzles that I missed out on in the last round at Cubic Dissection so I was delighted to find that a couple more had been put up for sale in this round. Four identical burrs need to be inserted into a frame – and the clue to the complexity of this fiendish little puzzle is summed up in the fact that it’s a level 18.10 burr – so that’s 18 moves to release the first piece, and then another 10 moves before all three of the remaining bits come flying out, together.

It goes without saying that Eric’s work is great on this puzzle as well – one little thing to be aware of is that because the puzzle has so much air in the middle, some of the pieces will want to lean over and that will impede progress – best to keep your bits upright. 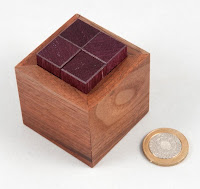 Havanna’s 2 by Alfons Eyckmans is a lovely four-burrs-in-a-box puzzle. Eric has made the burrs in purpleheart wood and it looks brilliant in the walnut box. This one’s pretty tricky and removing the first piece takes an awful lot of manoeuvring of all the bits in the box.

The first time you try and take the puzzle apart, your immediate challenge is trying to work out where the stoppers inside the box are and more or less what shape the pieces are – and having removed them, realising that the pieces are somewhat more complex than I thought they were. 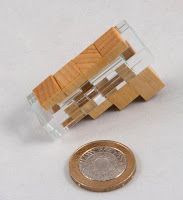 Several far more eloquent writers have already blogged about the Zauberflöte. Neil raised some interesting questions about ‘solutions’ on Renegades using this puzzle as an example – specifically, if rotations are clearly possible on a puzzle design, should they be allowed in a solution – and it was quite interesting to hear from Gregory “Rotations Required” Benedetti who designed this puzzle, that as far as he was concerned, even if a puzzle wasn’t designed to use rotations (and this one hadn’t) if they were clearly possible and they resulted in a shorter solution, then absolutely they should be used and explored! 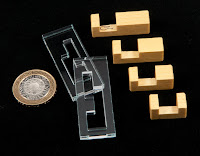 All I’d add to their expert opinions is another vote for this format of clear acrylic boards combined with lovely hardwood bits – it looks great next to Eric’s Padaung Rings!
Posted by allard at 19:43