A bit of navel gazing...

DISCLAIMER: Sorry, this post may be a little more indulgent than the others have been – if you can believe that!

Having just passed a hundred posts, I thought I could spend a little time reflecting on what’s happened: when I started writing this blog at the end of February this year, I saw it purely as a means of writing about the puzzles that I enjoyed – it was all rather selfish, but hey, you didn’t have to actually read it, so I thought I might get away with it...

Okay, so the hundredth post went up at the start of November – which I reckon makes it about 12 posts a month, or a post every couple of days or so (I’m not great with numbers!) – not a bad average, although I’m rather aware that over the last couple of weeks I’ve been letting that average slip quite a bit. (Sorry. Bit of lurgy.) But that just says I’ve written a lot, and we’ve already agreed that was just me being selfish ... but the thing that has astounded me has been the reaction to the blog – there are actually people out there who seem to like it, and read it. Regularly even!  As of this afternoon it had 21,700 page views, which given that I haven’t actually done anything to try and drum up any support, kind of astounds me. Heck there’s even a bunch of people signed up to follow it – admittedly I know a few of them – I’m guessing that the family kind of feels obliged to, and I can kind of understand some of the MPP guys wanting to keep up to date on MPP-stuff, but there are a bunch of names in there that I recognise from the wider puzzle-world that I’ve never met. Real puzzlers.  Puzzlers who actually design things, not just play with them like me. And that’s all rather humbling actually.

A couple of weeks ago at the DCD I was more than a bit taken aback when I met folks for the first time (you know, real puzzle folks!) and they referred to my blog – that sort of blew me away a bit and made me wonder if I needed to take this whole thing a bit more seriously, after all I’m still just doing this because I enjoy it ... the fact that some others choose to read it as well is simply a bonus.

What has been quite interesting is watching the stats on the blog, and in particular what posts are more popular than others. There’s one page that got way more hits than any other. The Shapeways Shopping page, but that was pretty much all driven from somebody tagging it on Stumbleupon – presumably somebody connected to Shapeways (don’t call me cynical!). Anyway, what I find interesting is the pattern in the stats after that – all the posts that get a lot of traffic are the ones that are really about people – the one about the visit to Wil’s place was undoubtedly boosted by Wil’s mentioning it in his round robin email, but the series of posts about our MPP meetings consistently come out high in the page stats – and that, I think , confirms my old suspicion about puzzlers – they’re a good bunch and they like to hear about other puzzlers having fun with puzzles – possibly even more than just hearing about the puzzles themselves. Those are also the posts with the longest list of comments on them ... and speaking of comments – over 150 of them have been added to the blog – and that’s great – it’s kinda nice hearing people’s thoughts or having them share their stories and experiences in here as well. So thanks to those of you who’ve taken the trouble to do that.

One other thing I hadn’t realised was quite how much non-standard English has crept into my language in general, and my casual writing in particular. Quite a few times I’ve found myself having to explain a phrase or two in an email to someone who’s just been totally confused by my turn of phrase. [I blame my South African upbringing and spending 5 years in Glasgow before moving down to England.] Given quite how much I’ve managed to confuse some folks in the States with my version of English, I have no idea how my French and Russian readers (yeah!) are managing to put up with my writing.

It’s been interesting watching the referring links change over time – at the start most of my traffic was coming from other puzzlers’ blogs (Thanks Brian P, Oli and Kevin) but over time there’s been a marked shift to the search engines (Thanks Google!) – and the search phrases have been quite telling in their patterns – I was still amazed when a little while after writing about a particular puzzle, I was Googling it to try and find some more info and found that my review of the puzzle came up as the first link! It was kinda nice to notice over time that the search engine hits I was getting became less and less for puzzles that I’d written about and more and more for people looking for my blog – weirdoes!  ;-)
OK, so where are we: I’m amazed at the reaction my selfish little project has had, but hey, I’m still doing it because I enjoy it, so I intend to carry on in the same vein. You can expect to hear about the puzzles that I enjoy (and only about the ones that I enjoy, because this is my selfish little blog!) and any get-togethers that I manage to arrange or get along to – I like writing about those because they help me to re-live them and keep them fresh in my own mind – the fact that you folks seem to like reading about them as well is just the icing on the cake. 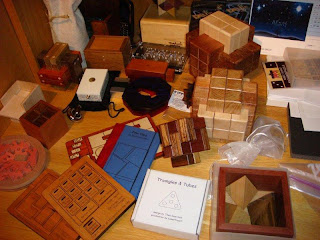 OK, there are plenty of puzzles on the desk to be played with and several will no doubt make it into a post coming your way soon – thanks for reading my blog and indulging me in a bit of navel-gazing – I enjoyed that ... normal programming will resume shortly!