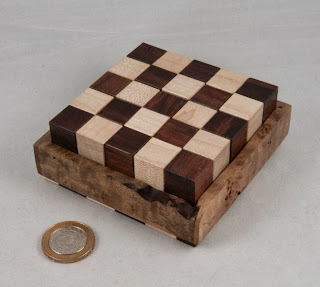 I’ve commented on the fact that only a bunch of puzzlers could talk about being Coffin collectors without being accused of being rather macabre, and I suppose there’s something similar to be said of someone who tells everyone he’s looking forward to an Unhappy Childhood...but I’m getting ahead of myself a bit...


One of the puzzlers I’ve ‘met’ (in the virtual sense) through a couple of puzzle forums is a real ace at solving puzzles – Neil generally calls himself The Juggler (and I have visions of him as some sort of superhero or arch-villain with a set of juggling balls at hand to either mend the universe or face off against Batman – although I suspect it may be more grounded in a down-to-earth enjoyment of throwing things around) and is one of very few people in the world to have solved a Silver Revomaze.
A few months ago his puzzling journey took an interesting twist when he started considering the idea of making some puzzles of his own – and rather ambitiously he set out to build himself a Matrioshka. Now that first foray into puzzle-making might not have been particularly successful, but the planets had well and truly aligned by this stage, and a short while later he was visiting a local puzzle maker extraordinaire by the name of Scott Peterson – and if you’ve read about my Rosebud and Cluster Busters you’ll know he’s an incredible craftsman. 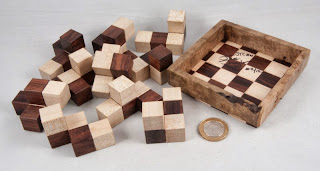 Neil filmed a couple of great videos in and around Scott’s wood shop and spent a while picking up some tips, and then he made the mistake of mentioning on one of the forums that he’d been playing around with some ideas for his own puzzle box – one of the big names in puzzle boxes (he’s shy, so let’s refer to him as Stick-guy) chimed in with some serious encouragement and a challenge or two, then a few collectors piped up and asked if he’d make one for them, and before he knew it, he’d pretty much committed himself to making puzzles ... and this seems to have taken him by surprise – in fact he changed his sig from then on to refer to himself as “A very humbled puzzler.” [Spoiler – he shouldn’t be! He’s good!]
In the following month he turned his hand to building some of Coffin’s cubes for himself – and even glued them together in situ, so that he’d have the joy of having to solve them once the glue had set [given the ones he attempted, I wonder if he ever thought “Hang on, I must have glued the wrong bits together. This thing won’t come apart!] ... once he’d got himself comfortable with making little cubies, he then set about making something a little more serious – and progressed to the Unhappy Childhood, aka Coffin #41. 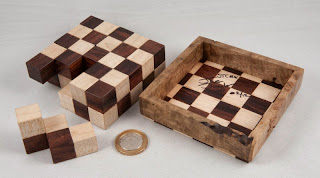 I’d already told him that I’d love to be able to buy a copy of the first puzzle he makes a run of, and this was it – he posted a couple of teaser pics during the process and commented on the fact that he’d come up with a nice idea for the tray, but didn’t post any pics of that until he was ready ... and it is lovely! A couple of weeks later he dropped me an email to say mine was on its way...
[It would be remiss not to mention that while all that was going on, Neil had a bit of a moment with a table saw, with the latter doing a pretty decent job of trying to remove one of the former’s thumbs! – He had it put back together again and had it splinted up, but that hasn’t dented his enthusiasm for making his own puzzles or indeed slowed him down at all.]
My Unhappy Childhood arrived rather well packed and quite quickly – which given the season, was quite a pleasant surprise!
I’ll cut to the chase right away - It’s a beautiful piece of work – the cubes are made from maple and rosewood and the tray is made of some gorgeous figured myrtle burl – with a checker-board floor(!). The myrtle burl is really full of character and the detail in the grain is phenomenal, especially when it shimmers when the light catches it just right – and if you look at the tray, you’ll see that one of the corners has a bit missing from a knot in the wood – and Neil’s incorporated that “imperfection” into the side and made it a stand-out feature – nice work, buddy – and thanks for keeping that bit of character in there and not being tempted to saw it off – he has smoothed off all the rough edges around that knot so there’s no chance of nicking anything on it. 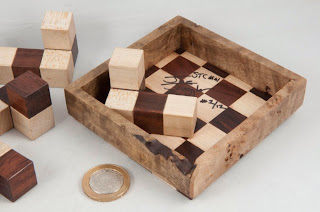 Now who would choose to make the floor of a box out of laminated slices of cubies – you’d have to be really proud of your craft to even consider something like that – but it’s a beautiful touch that balances the puzzle off rather neatly.
Inside the tray, Neil’s signed it as “The Juggler”, given it it’s shorthand name (STC #41) and numbered this as #2/12 ... he’s kept #1 for himself (which seems only fair!), but it does suggest that there are going to be a few more of these around – now I know that a few of those will have been spoken for by nutty collectors like myself, but I have heard that a couple of them might be coming to a certain popular puzzle auction site near you in the not-too-distant future... keep an eye out for them – they’re great!
Neil supplied the puzzle with a neatly printed, numbered certificate that includes an extract from Stewart Coffin’s description of the puzzle and some details of the different puzzles possible ... using these pieces, coloured in this way, there is a single solution that provides a proper checker-board pattern on both sides – if you ignore the colouring, there are 19 000-odd solutions to pack them into the tray.
While Neil and I were swapping emails about shipping the puzzle, nice guy that he is, he asked me how I’d like it shipped (i.e. solved, apart, or together but unsolved) and idiot puzzler that I am, I went for the latter ... now having received it and played around with it, I have developed a huge amount of respect for this puzzle, and have in fact not managed to come up with a sensible strategy for solving it – all my observations about mirrored pairs  and dissimilar pieces have got me absolutely nowhere ... it is a cracking puzzle, but then it’s a well-trodden Coffin design, so it would be, wouldn’t it?
Neil’s version is superb – and I’m rather chuffed that I’ve managed to con him into letting me purchase one – thanks Neil ... hope the thumb heals soon and that you continue to enjoy making beautiful puzzles for a very long time.
Cheers mate!

[Oh, and in case you're wondering how I managed to take pictures of a solved puzzle when I've already told you I couldn't solve it ... let's just say my good friend Andreas Rover helped out a bit! :-) ]
Posted by allard at 21:47