Another Pilgrimage to Puzzle Heaven


Last Saturday morning I found myself driving around some dodgy back roads outside of Bristol in search of an international airport ... you’d think I’d know better than to blindly trust my sat-nav in this country by now – it assumes that all roads are equal and has no idea that you might not choose to drive at the maximum permissible speed on a particular road because it’s pretty narrow, surrounded by thick hedgerows and has several rather wide farm vehicles on it! Anyhow – it DID eventually manage to get me to Bristol International Airport at the right time so I was able to collect Louis fresh off his flight from Amsterdam on his latest puzzle pilgrimage ... we were heading to Devon – a day-trip to James Dalgety’s fabled Puzzle Museum. I chose to ignore the sat-nav’s directions for most of the way from the airport, much to Louis’ amusement ... “Nope, never been this way before, but I am not turning right up that little road.” The sat-nav did eventually pick up the “right” road and got us safely down to James’. 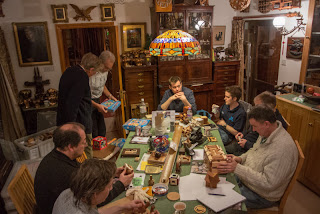 On arriving at puzzle heaven, Percy gave us a rousing welcome (or a stern warning – it could have been either) – but he soon smelt Ben and Jerry on my jeans and we became the best of mates again. Inside I handed over Gill’s contribution – a tin of homemade doughnut muffins – to Lindsey and we made our way through to the grand puzzle room to find Joe and Rich already deeply puzzled – they’d arrived a bit earlier than we had, and had already had a quick tour and been presented with their first challenges – Rich was deeply engrossed in a wicked-looking six-piece burr (that he conquered soon after).

Chris and his dad arrived a bit after us and then Simon arrived with James-the-younger in tow – it was great to see him in such good form after his health scare over the past few months... hopefully a little puzzling and some friendly banter will help the recovery process!

Revitalised from the journey south with a good cup of coffee, we soon fell among the puzzles, bringing out all of our recent purchases in the hopes of having something that James-the-elder hadn’t seen before (far harder than it may sound!).

In the centre of the table James had set up a Snail Ball run and during the course of the day almost everyone had a bash at releasing it and watching it race down the ramp to the bottom ... in about six and a half minutes! (It’s the simple things.... :-) )

Laurie arrived in full force and began dispensing puzzle challenges to all and sundry in between rousing bouts of banter interspersed with some truly dreadful puns – which I suspect are a source of pride (and rather amusing in spite of the groans we felt required to express :-) ).

Chris had brought his copy of Mike Toulouzas’ latest creation (“Illusion Puzzle”) along – he’d snagged a copy on Puzzle Paradise within seconds of it being listed and was very chuffed with it ... he’d been telling us about it for a while – about how he’d been playing with it and had it come apart into six pieces with no hope in heck of being able to recognise where each piece had come from – and then spent days and days trying to put it back together again – most times finding an assembly that worked fine for the first five pieces, but wouldn’t allow the sixth piece in... he’d eventually managed to get it back together again in time to bring it down to James’  - so Louis did the obvious thing and promptly disassembled it over a cup of coffee, and then (relatively) calmly proceeded to put it all back together again.

James brought several original Coffins out to play, from a “simple” four-piece puzzle to a set of very typical Coffin-shaped pieces that James challenged me to build a symmetrical shape with – with no idea of the eventual shape I didn’t manage to produce anything vaguely symmetrical (perhaps that’s one of my puzzle blind spots!) – Chris had a bit of a go at it and did only slightly better than I did, before we were both showered with abuse by our host for our feeble attempts ... so we did the obvious thing and gave it to Simon who promptly completed it in mere minutes and was then given several further challenges with the same pieces that he duly completed as well... next time I’ll surreptitiously pass it to Simon far earlier in the process – clearly he is way better at puzzles than I am!

Lindsey supplied an absolutely terrific spread for lunch that saw virtually every single one of us going back for seconds ... and the mince pies and muffins afterwards went down a treat as well. Somehow we hadn’t managed to eat enough at lunchtime, so offered the choice of a fish supper from the local chippie or more of the same, we unanimously elected to have another go at Lindsey’s spread for dinner – and it was mighty fine the second time around as well!

During the course of the afternoon Joe and Louis asked to see James’ collection of impossible objects and impossible folding cards as they’d both developed a bit of a liking for them and had been doing quite a bit of their own experimentation – some of which made it to IPP32, just in case you missed that! 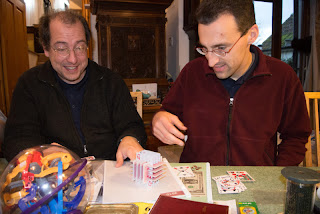 After a brief root around they returned to puzzle central with a copy of Allen Rolfs’ legendary tome on the topic and several examples that James had played around with himself ... followed shortly after by the production of a 12-card burr from one of his cabinets ... we’d all seen (heck, made!) the classic three-card burr, but this one had four parallel cards in each plane – someone has incredible skill and a lot of patience to get that all right.

James plied Rich with several burrs – most of which were returned fully solved, before he asked if he could have a go on James’ Borg Box. This legendary Stickman box is a decent challenge as a puzzle box to start with, but when you realise that Rob’s made it entirely without any glue, screws or nails, and each of the panels on the box can be removed and entirely dismantled – it instantly becomes pretty darn epic!

It didn’t take Rich very long to work out how to make progress (he’s a bit of a whizz!) and soon enough he had one side open, then the other, and then he removed one of the panels altogether – to gasps from the assembled puzzlers – we’d been talking about the fact that Rob made it clear that if anyone fully disassembled their Borg Box and couldn’t put it back together again he would reassemble it for them at a fee because it was such a tough challenge, even when you know what you’re doing! With just a little bit of goading from us (although in fairness he probably didn’t need that!) Rich promptly disassembled the top of the box into many, many pieces... and it has to be said that at this point, not even James tried mixing up the pieces as he is wont to do on occasion.

A few minutes later he’d rebuilt the top of the box, replaced the lid and closed it all up again ... I had a go at it and managed to work out the main elements of the locking mechanism and get it about half open before I retreated and closed it all up again. It really is an epic puzzle box and I think we’re all rather fortunate to have someone like James who’s so happy to share all his puzzles with anyone who’s interested.

Speaking of things Stickman, Chris hauled out James’ Fulcrum Box which he’s always had a bit of a soft spot for to show his dad ... and Phil duly fiddled around and opened both compartments – with a large smile on his face – I think he likes it as well.

Inevitably Rich asked for a Berrocal to play with and Romeo and Juliet was brought out for a round of puzzling – he had a great time pulling it to bits only to have someone mix up the bits in front of him (hey, it’s only fair – James did exactly the same to me!) and then reassemble it with the compulsory cotton gloves to give it a bit of a clean in the process. Reassembly may have had a couple of false starts where Rich got all the way to the end to find one or two pieces still outside that needed to be inside, but he still put it back together again way faster than I had!

James-the-younger worked his way through a number of the more unusual Karakuri boxes and Chris hauled out Eric Fuller’s Tier Box again ... and this time I stayed away from it having been thoroughly humbled by it on a previous visit. 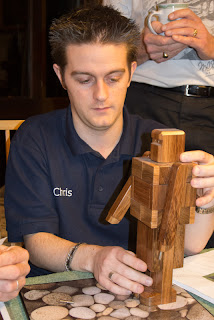 One of the other puzzles that almost everyone tried at some point was Goh Pit Khiam’s Arrow Blocks from this year’s Design Competition – several sort-of (read: WRONG!) solutions were appealed, but nobody even got close to solving this rather tricky little beast ... even with a rough description of the high level steps involved in solving it! (And that should have been the tricky part!)

Toward the end of the afternoon Chris asked if we could have a go at Ned Kelly, one of Brian Young's impressive sequential discovery puzzles. Between the few of us playing around with it we managed to find a few things that were useful but hit a pretty massive brick wall ... so we're going to need to try that one next time...

As always James was indecently generous, not only having provided us with as many puzzles during the course of the day as we could manage, feeding and watering us all day, but he also gave each of us a puzzle or two from his pile of swaps to take home – Thank you James, for another incredible day – you sir, are an absolute gentleman!