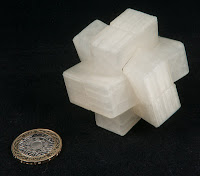 I mentioned in my write up on Peter’s EPP that Steve Nicholls had been demonstrating his 3D printer during the course of the afternoon and that he’d given me one of his wonky burrs... a couple of weeks ago at MPP, Steve had piles of newly printed goodness and I snagged a couple of interesting little puzzles. So today’s post is brought to you compliments of Steve’s Makerbot!

If you’re at all interested in 3D home printing, you’ll have heard of Makerbots – they’re on the instant gratification end of the scale when it comes to 3D home printers – that doesn’t mean you can’t tweak them and improve them, but they do come pretty much ready for action straight out of the box, unlike some other 3D printers that require a steady hand, a soldering iron and plenty of time on your hands... but I digress.

Steve had shown us how easy (relative term!) it was to model a puzzle in your favourite software and then export it directly to the printer and watch it produce a real life puzzle for you in mere hours (power cuts aside). He’d shown us how you could then do fancy things in some even more impressive modelling software and used his wonky burrs to make the point – they start out as simple six-piece burrs with an extra notch to enable assembly ... then each pair of pieces is twisted through six degrees. [Steve cooked up another variant that then slanted each pair a few degrees as well.] Hit print and a little while later you have one of Steve’s wonky burrs in real life.(Steve's wonky burrs are available on Thingiverse if you have a Makerbot lying around.) 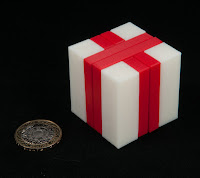 The software takes care of all the internal structure on the basis of how ‘full’ you want the insides – basically it makes sure there’s enough material to keep things rigid by building up internal walls between the surfaces – clever that! The surfaces on my puzzles have a slightly bumpy feel to them, presumably an artefact of the way the plastic is printed in lines –this doesn’t detract at all and in fact, on the wonky burr, it actually helps to hold the pieces with a little extra friction.

I’ve already talked about the fact that the wonky burr is quite disorientating given the odd angles – and it kept a couple of the guys busy for quite a while at MPP ... that says a lot, methinks.

At MPP9 I picked up a copy of Donald Osselaer’s CubeBurr and Stewart Coffin’s Peanut, fresh off the Replicator. 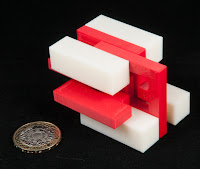 Steve’s made the CubeBurr in red and white and they look rather English from the right angle. CubeBurr is made up of four (red) boards on the inside and a pair of fat (white) ‘H’s on the outsides making up a cube when fully assembled. It’s a non-trivial burr, requiring 13 moves to free the first piece, and another 5 to remove the second... so even disassembly is “interesting”.

The other puzzle I picked up is a classic Coffin design. Peanut is based on a set of six different pieces, each made up of two half rhombic dodecahedrons stuck together. Coffin shows there are twelve ways to do this and that a set of six of them is capable of making some rather interesting constructions...

Steve’s printed off a set of the pieces (together with a pair of half rhombic dodecahedrons to go in the centre of the hexagonal ring) in what can only be described as pretty psychedelic colours! I think they look excellent... sure I’d love to have a beautifully crafted Peanut in exotic hardwood, however this one’s fun to play with, won’t get damaged by passing kids (or dogs!) and really stands out on the puzzle shelf!

The pieces lock together nicely (courtesy of those little ridges) and there are a series of challenges in Coffin’s Geometric Puzzle Design for the puzzlist to work his way through...

I think these 3D home printers are phenomenal for puzzlers. Sure, Steve’s probably downplayed some of the learning curve required, but the fact remains that these things make it feasible for a puzzlist who doesn’t trust himself with power tools (Yip, moi!) to be able to make up a copy of any new published design within hours of it going up on Ishino’s web site. They produce highly playable puzzles right off the bat and while they will never replace beautifully crafted wooden puzzles in my books, they open up some fantastic avenues for exploring designs that might otherwise not have been available to folks who aren’t craftsmen themselves ... there’s a whole new world opening up out there...
Posted by allard at 20:32