Another bout of DIY-ing 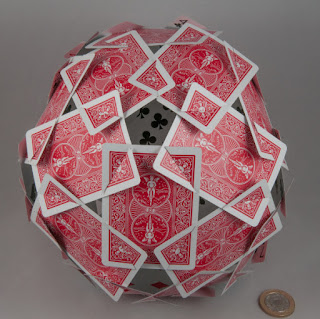 Last weekend I had a go at something else I’d wanted to have a bash at for a while... making a set of platonic solids out of playing cards.


I’d seen some pics on the web of various versions and then last weekend I decided to hack up a couple of decks of Bicycles and try my own.


A bit of Googling turned up a really helpful website complete with templates to print off and the basics instructions for assembling them... as well as some of the math behind the positioning and angles of the cuts. 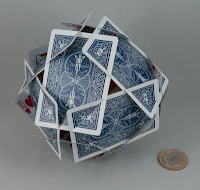 I printed off the templates and laid into a brand new deck of bikes with a sharpie and an awl to mark the cuts (sharpie marks at the edges and awl holes for the end of the cuts on the inside) and then sat back with a pair of scissors and spent a while making the requisite cuts on each card ... quite a few of them – the two larger assemblies (Dodecahedron and Icosahedron) each use 30 cards and need 4 cuts per card ... frankly just marking them up properly is only real bother, putting the cuts in them is relatively simple... 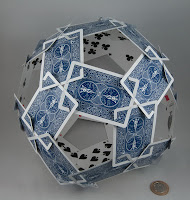 I started with the Octahedron – nothing too complicated and if I didn’t like the results I wouldn’t have wasted too much time! Slotting the cards together is a little fiddly at first, until you work out the easy ways to get the slots to open up and slide together, then it’s really simple ... on the smaller assemblies, fitting the last card is a little tricky, but not massively so. 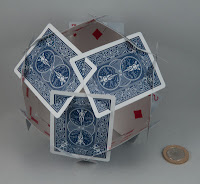 From the Octahedron, I liked what I saw, so I ploughed straight onto the Icosahedron (my favourite!) and the Dodecahedron. The Icosahedron is a nice, dense assembly with relatively small triangular and pentagonal windows – basically you build a pentagon with the short ends and triangles with the long sides – repeat until you have a ball! Similarly the Dodecahedron is made up of a series of triangle units (made of the short ends this time) that are joined in sets of 5 forming pentagons with the longer edges ... resulting in a larger, more open structure. 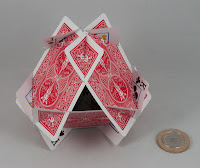 For completeness I made up a tetrahedron and a cube as well ... now can we stack them one inside the other a la Wayne Daniel’s All Five Platonic Solids puzzle?
I really enjoyed making up these assemblies - so much so that I made up a few extra sets and gave them to some local puzzling mates - think I've now well and truly satisfied that urge - and I have the proof all over the top of my puzzle cabinets. 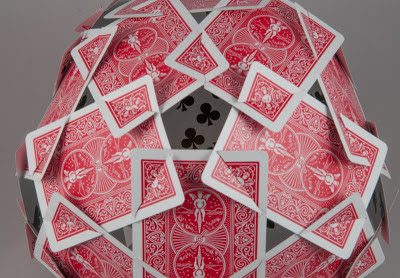