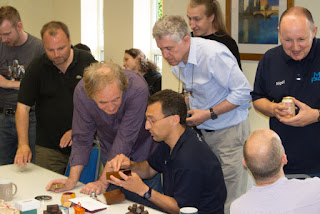 This particular epic starts when I collect Wil and Louis from the airport on Friday evening. It turns out that Wil’s suffered unspeakable abuse at the hands of a lovely young stewardess on the way over (she may have stubbed his toe with her trolley - the accounts I got of exactly what happened aren’t necessarily complete…) and as a result he’s had to be pacified with a glass or two of champagne – he manages to survive and makes it to Birmingham with a little help from Louis… and that’s just the start…!

Back at my place we get a bit more of the story of the trip over (the complete facts still elude us!) before Gill retires for the night leaving the boys to talk (and play!) puzzles. I bring out a few recently acquired things to play with, Louis produces close on a hundred partly completed exchange puzzles (he’s done all the hard work, it’s just up to me to finish off a couple of little things) and then Wil opens his suitcase and starts pulling out all manner of treasure…

He produces a mammoth new n-ary puzzle from Jean Claude Constantin that looks like a super-sized version of the Lock 250+ and challenges us to guess how many moves it requires to open… and between Louis and I we guess a large number… a very large number and Wil seems content, and not at all surprised – we’re staggered… I ended up getting a copy from him and it’ll turn up in the blog shortly – although there may not be any pics of it solved… sorry. 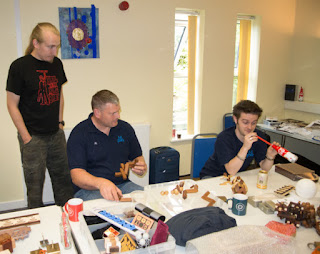 Next he produces his newest cola bottle puzzle … except this one’s really different! Suffice it to say that he has a good laugh at setting me up for this one and catches me out thoroughly… and the next day he widens the net …

At one point Louis asks for my copy of the Amazing Box #3 and proceeds to take out a little bottle of furniture oil from his luggage and polishes up the AB#3 and it looks terrific. I give up at 2:30am and wander off to bed leaving Louis still puzzling in the cave… next morning there’s the now-traditional pile of solved puzzles to prove his previous night’s productivity.

We all head out to Warwick the next morning and soon after we arrive there’s a room full of puzzlers happily chatting about the hundreds of puzzles arrayed around the tables… Wil’s set up shop in the far corner and there’s a continuous throng gathered around his collection of plastic crates full of puzzling goodness. 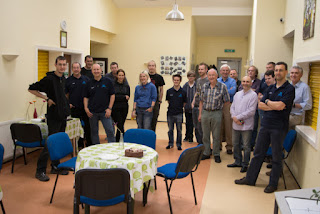 At some point Kevin was talking about the fact that the n-ary puzzles he had just weren’t enough, somehow – he has a Kugellager puzzle that requires c.4000 moves but he wants something more… so one of us asks him how many moves he’d like to see in an n-ary puzzle so he goes for the radical suggestion of c.6000 … at which point we tee up Wil to introduce his latest offering: JC Constantin’s monstrous new lock and Wil sets the assembled masses the challenge of estimating the number of moves required to open it… with the winner who comes closest (as long as they’re within 30% of the right answer) receiving a copy of his latest cola bottle. Game on! Unfortunately most people soon settle on the same answer (c. hundreds of millions) so the game deteriorates somewhat and a while later a new cola bottle challenge is set…

There was a short pause in the proceedings during the afternoon when we all headed to the next room to wish Oli a happy birthday in traditional song (no, we were polite!) and invite him to entertain us with a speech – he offers us some of his cake instead – everyone’s a winner!

A little earlier in the day Chris had presented Oli with a large box beautifully wrapped in some interesting pink wrapping paper held together, at one end at least, with hazardous materials warning tape … Oli piles in undeterred by the warning tape and soon enough has opened the first box to find… another box – cue mild amusement all round … so he piles into the next box … and so on … and so on … until the eventual gift of a recent IPP exchange puzzle emerges from amidst the piles of packaging looking positively microscopic in comparison, but kudos to Chris who’s found a sensible use for all the packaging that most of us puzzlers seem to accumulate in our quest for new toys!

Satomi joined us for a good few hours bringing along her usual couple of boxes of Japanese puzzling goodies. This time she'd also managed to bring along a couple of copies of variants of Mine's cubes (Lock-N, Lock-y and Disjointed) for folks who'd not been able to find them elsewhere yet ...

Drawing inspiration from an earlier group photo of Super Cubi's and a King Cubi, Nigel asked everyone to bring along their Popplocks and the resulting table-full, including Wil's T1 is a real sight for sore eyes - don't anybody try and put a price on that table-full, please!

...speaking of Wil's T1, that got passed around quite a lot with several folks having a bash at it over the course of the day. While not everyone solved it, a few folks did enjoy victory over that most legendary and unobtainable modern puzzle lock - and broad were the smiles of satisfaction!

Peter Hajek managed to puzzle a number of folks with his new incarnation of the anti-gravity machine employing decks of cards ... and couple of lucky puzzlers managed to bag a copy of their own along the way.

Oli brought along a crate of puzzles that he'd run out of place for and a couple of us did our bit by swapping him some small bits of paper for some big bulky puzzles, although in fairness, I don't think he quite understood the process because half the time he wasn't even taking the small bits of paper we were proffering! (Thanks Oli!)

The day literally flew by and before we knew it we were packing up the toys and heading around the corner to Nigel's place for a BBQ. It was the first time I'd been into Nigel's house and in spite of having seen some pics of his collection, walking in through the front door and being greeted by three massive cabinets full of puzzles still stopped me in my tracks ... it looks impressive, mate!

It didn't take everyone long to decamp to Nigel's, make themselves at home and pick up some new puzzles to play with... Nigel slipped into incredibly-gracious-host-mode, donned his Harley apron and set about feeding everyone  - the BBQ was exceedingly good (remember that coming from a South African should be taken as high praise indeed!) - special mention must go to Adin's homemade burgers - phenomenal!!

Several more folks ended up playing with Wil's new cola bottle and eventually Adin Russ (sorry Russ!!!!) became the first to solve it, much to Wil's great pleasure (and relief that it was solved the way he'd intended).

After most of the eating had been completed, Wil presented a second cola bottle challenge in the form of a puzzle with a deck of cards... he took out a standard deck of cards without any jokers (well actually he used an incredibly shiny gold deck of cards, but trust me it doesn't make any difference!) and asked someone to select a card and place it face down on the table. He then closes up the fanned deck and places it on the table near the selected card and asks "What card is now in the deck that was not in the deck before?"

I'd heard it the night before, and had tried a lot of guesses and yet I was nowhere nearer the answer than the others who'd only just heard it... there were plenty of theories and even more guesses - at one point Simon's suggestion of "DIScard" was immediately countered by "DATcard" but Wil patiently listened, sighed and told us to try harder - he pointed out that it wasn't a play on words (we'd been concentrating on that for some reason) and it worked equally well in Dutch and in English... in the centre of the guesses Louis was struck with inspiration and gave Wil the answer, scooping the last available copy of the cola bottle #9 - well earned Louis!

There were a few rather stranger incidents during the course of the evening... with Jamie getting to know a set of Chinese rings rather intimately over the course of what seemed like hours ... I'm sure there wasn't much alcohol involved but he did seem to be going backwards and forwards a fair amount and not necessarily waiting until he got to an end before changing direction, but he seemed to be having fun... so no harm done!

...Adin took it upon himself to solve Mount Fuji and received a fair amount of encouragement from all round him, including a challenge of a large cash prize if he managed to solve it himself in front of us... sadly that made him smell a rat. As did the fact that a few of us specifically drew up chairs to watch him and give him "advice" and he got visibly nervous when I took out my camera ... and thus began one of the funniest interludes ever at an MPP with several of us literally in tears of laughter as Adin tried various strategies only to be quizzed by the masses and then given more and more helpful advice.

"Have you tried spinning it?"

"Have you tried blowing on it?"

"Have you...." - "AAAARRRGGGHHH leave me alone!" ... whenever the hints were deemed too obvious by the offerer of the prize, he'd announce an appropriate reduction in the prize - none of which was lost on Adin who followed all the baiting carefully and you could see him slowly forming the solution in his mind and it pretty much coincided with us virtually telling him what to do and then there was a moment of absolute clarity on his face when he looked at us and announced that he would not be doing that to a puzzle - even for offers of cash ...

I haven't laughed as much at a puzzle in ages, and I don't think Adin will forgive us for a while ... although he has subsequently admitted to be considering trying to buy a copy of his own, so it couldn't have been too traumatic for him!

Having the Dutch puzzling team in tow, I was one of the last to leave Nigel's after a thoroughly awesome MPP11 (+BBQ) - compliments to the cook and organiser - grand job Nigel - GRAND JOB!

...I spent the drive home quizzing Louis and Wil on Wil's riddle, and still didn't solve it until the next morning when I stumbled across something that helped me bridge a few gaps in my reasoning... and it's good - there's an elegant solution that you will know is correct when you find it...

Even though we were pretty shattered after a FULL day's puzzling, we still spent a couple more hours chatting before crashing that night ... and then a few more hours puzzling in the morning in between a great English breakfast courtesy of Gill before placing the Dutch contingent back in the care of KLM where hopefully Wil didn't get assaulted on the way home as well... :-) 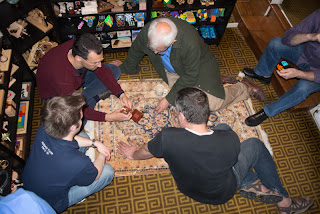