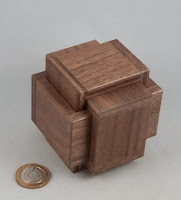 Last time I saw Wil Strijbos, I bought a couple of intriguing Kamei boxes from him … he’d let me know he had a few Japanese boxes that he thought I’d be interested in, and he was right.


The first one was a souvenir produced for the 2012 Karakuri Puzzle Festival in Hakone. Expansion I was the first in an increasing set (I know!) of variations on a theme – I’d seen one or two of the latter variants so I knew more or less what to expect. Shaped a bit like a burr, it doesn’t look like a typical Japanese puzzle box, and in fact, if you treat it like one, you’ll never get it open… however, with the name as a clue it opens in a single, simple movement. 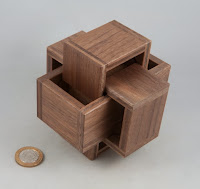 Thankfully I didn’t open it until I was safely at home at my desk because opening it leaves you with a pile of pieces that all look pretty similar. After making sure that I’d found all there was to find inside (I wasn’t going to overlook a spare compartment in my haste to put it back together again!) I set about putting it back together again… and there starteth the real puzzle!
Putting this thing back together again is a real sod … while some of the later variants have a simple and elegant mechanism to open and close again, this one opens and promptly self-destructs, leaving you to try and reassemble the bits … and even if you manage to keep some of the bits together, introducing the last one or two pieces is still a mission… 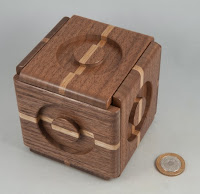 Wil had asked me what I thought of it subsequently and I described it as pretty simple to take apart but a bit of a sod to put back together again … Wil then sought confirmation from Japanese puzzle box guru Jan Willem, who in turn confirmed that it was a sod to put together again… so don’t just take my word for it!


Expansion VI is a totally different beast! I’d seen a copy of this one at James Dalgety’s place and we’d talked about the fact that the movements weren’t quite as smooth as the usual Karakuri boxes – although in fairness, this one has a rather complex set of pins and tracks that give it a pretty decent 83 moves to open the box. 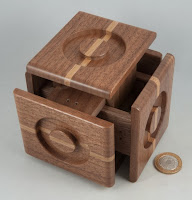 You do need to make sure that the panels are properly aligned before you try and move the next one, but there’s a lovely simple set of moves that gets progressively longer and longer to open each successive panel, before finally being able to remove one of the panels entirely … although you then need to backtrack a bit in order to get the box itself opened.


It is a bit fussy and it would probably frustrate a muggle as you wouldn’t know whether the panel should be moving or not so you might not realise that you were trying to do the right thing, it’s just that one of the panels isn’t quite lined up properly.
In spite of the fussiness, I still like it ... Chinese Rings, in a box – smashing! 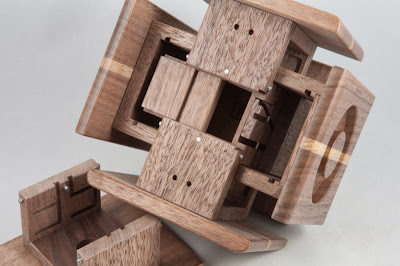