OK, so I warned you that there wouldn’t be a blog post for a while as we were going to be on holiday in the Caribbean … and while there wasn’t a blog post, there was some puzzling on the boat, so it’s only fair that I tell you about it.

I took a few tray packing puzzles along for the ride because they’re so easy to pack and pretty hard to damage. I also took one of the IPP33 exchange puzzles that I hadn’t managed to solve yet in the hopes of making some progress on it and finally I took a puzzle that one of my MPP mates had sent to me a few days before I left on holiday… and those three little pieces still have me flummoxed – so much so that I’m probably going to build it into my exchange puzzle for IPP34 … which means I won’t say anything else about that one until after IPP.

When I was in Japan last year I bought a bunch of puzzles from Mine [Mineyuki Uyematsu] – many of them tray-packing puzzles and I’ve been slowly working my way through them ever since – I’m not very good at them so they end up giving me incredible puzzling value for money.

4 Snakes plus 2 is a great extension of one of the classic tray puzzles, albeit a little disguised. You get a 7*8 rectangular tray with 4 identical black snakes, a red snake and a green snake and a 1*7 rectangular piece. 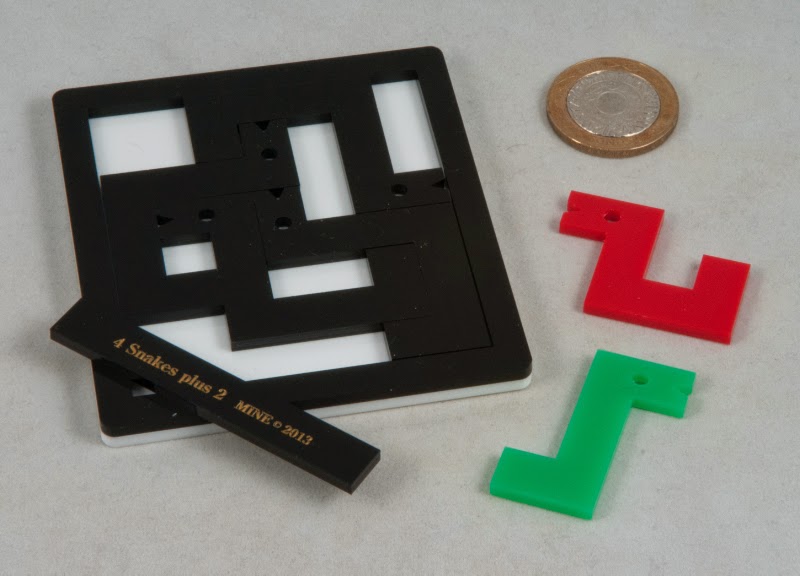 The first challenge is to place the rectangular piece along the bottom of the tray, thus turning it into a 7*7 tray and then fit the four black snakes into the tray… there’s only one way to do that and if you haven’t seen this sort of puzzle before it will confuse you for a while because your brain will keep telling you to do the wrong thing… once you work out the twist to this puzzle, you’ll find they fit in rather neatly – only just.

The second challenge is to pack the four black snakes along with the red snake into the 7*8 tray. In spite of having loosened up the little grey cells on the first challenge, the second challenge is a pretty tough ask. Adding just one row along the bottom really doesn’t seem to give you enough space to add in the red snake … and their shapes have clearly been chosen to make sure that there are a lot of ways of almost getting them to fit. I resorted to trying to find “efficient combinations” of the shapes and then seeing how those could be combined and that in turn led me toward a solution I might not otherwise have stumbled across.

The final challenge is to pack three black snakes, along with the green and red snakes and the rectangle into the frame… I was thoroughly convinced this one wasn’t possible for quite a while… there’s an obvious place to start, but that won’t help… you’ll need to throw all of your preconceptions out of the window to stand a chance on this one.

After spending absolute ages on this one challenge, I went back to my “efficient combinations” and discovered something interesting with one of the new additions, which gave me an extension that looked like a promising starter-for-ten … and from there finding where to put the other pieces turned out to be reasonably straight forward.

4 Snakes plus 2 is a brilliant, compact little puzzle – excellent for a little puzzling in between visiting idyllic Caribbean islands. The three challenges will give anyone from muggle to metagrabologist a decent challenge.

Square Birdcage XL is the second tray-packer from Mine that I took along on the cruise. You have a square tray, 8*8 units which serves as your birdcage and a set of 5 white birds (use your imagination a bit!) and a red one. 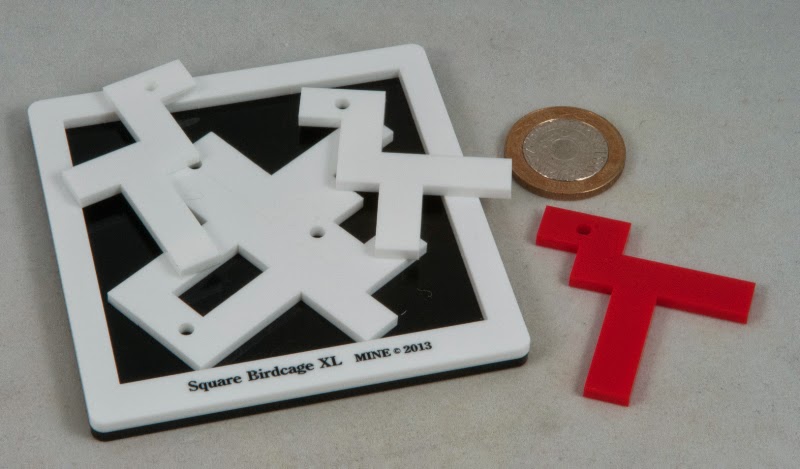 I started at the beginning – find a way to get all five white birds into the cage – at least I knew I had the right pieces that way! Starting to experiment with how the birds fit in the cage and interact with one another you quickly discover just how mean Mine’s been in the basic design of these birds. They protrude at the most inopportune places and getting some of them to work together makes you feel like you’re making progress, only to  discover that it’s impossible to put the last bird (or two!) into the cage. Even resorting to the classic trick isn’t a huge amount of help since there are five birds instead of the more usual four pieces.

Ultimately finding a solution requires noticing something ‘interesting’ about some of the pieces and then finding a very efficient way to use that insight, and even then you’ll find the solution has a surprise in the middle and, as all good solutions should, the pieces will rattle in the tray.

One challenge down, now onto the one I’ve been dreading! How to select the right four white birds to fit in the tray with the addition of the red bird… at this point, thankfully, I slowed down and gave it a bit of thought, and ended up solving the second challenge way faster than the first one – odd how we sometimes convince ourselves something is going to be awful and it turns out to be a lot less daunting that we’d thought it might be.

Dot-to-Dot was Joe Kisenwether’s IPP33 exchange puzzle. I’d taken it out and played with it a few times at home and never really managed to get anywhere, so I decided it needed to go on the cruise and I should spend some time cracking it…

It consists of a board with sixteen holes arranged in a 4*4 grid. Behind each hole is one of four colours. Along with the board you get a chain in a continuous loop with sixteen dots affixed to the loop at fixed intervals. Twelve of the dots are white (and opaque) and the others are clear. Your challenge is to lay the chain over the board so that the dots go in the holes in the grid such that the clear dots all allow the same colour to show through. The gaps between the dots on the chain are long enough to allow successive dots to be adjacent (diagonally or orthogonally) in the grid, but not long enough to allow you to skip a hole. 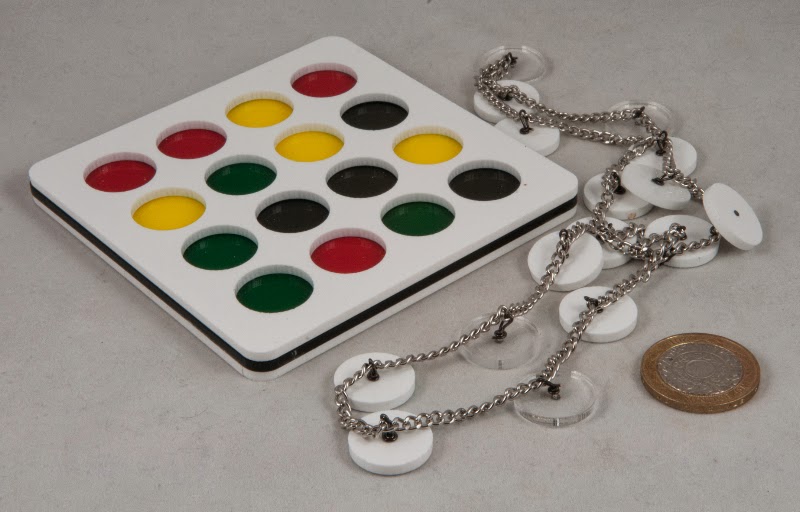 Given the chain is in a continuous loop, the first constraint is that you need to be able to actually reach all of the holes, so building from one end isn’t always a good idea as you can easily find yourself in a corner with nowhere to go. Once you get the hang of that, the clear disks need to be able to reach all of your chosen coloured holes, so it’s probably worth checking that before you waste too much time on a particular tack – like I did!

It took me quite a while to get used to just building valid loops (irrespective of the colours showing through the clear disks)  and then I started trying to target a particular colour. Now in the exchange Joe had said that the lighter colours tended to be easier, so I started there and after a fair amount of fiddling around I managed to find a valid loop that almost solved one of the colours and then discovered that with a little tweaking, I could turn it into an actual solution. I was somewhat stoked – this puzzle had kept me at bay for many months and I’d finally managed one of the challenges.

After taking a photo (proof!) of the solution, I pulled out the chain and started the next one… and before long I’d managed to find all of the other solutions – very satisfying after getting nowhere on it for so long.

This is the first time I've seen a puzzle with this sort of flexible constraint on the placing of the pieces - it really forces you to think ahead and plays with your mind.

Email ThisBlogThis!Share to TwitterShare to FacebookShare to Pinterest
Labels: IPP Exchange puzzle, Mine